Halberstadt is a county town with about 40,000 inhabitants, which lies in the northeastern Harz foreland and is considered the “
gateway to the Harz
“. The city impresses with its historic old town, the extensive cathedral square, a cost-free cathedral treasure and the unique Klusbergen mountains.

The silhouette of Halberstadt, which is characterized by church towers, is already visible from afar. During World War II, more than 80% of the city was destroyed by an airstrike and rebuilt or rebuilt in the decades that followed.

Cathedral Square, St. Stephanus & St. Sixtus and the Church of Our Lady

The most important attraction in Halberstadt is the extensive Cathedral Square with its impressive ensemble from the Cathedral of St. Stephanus and St. Sixtus in the east and the Romanesque Church of Our Lady in the West – two outstanding monuments of medieval architecture.

Halberstadt Cathedral is an elongated, three-nave, high to late Gothic basilica built between 1236 and 1486, modelled on French cathedrals. It is considered one of the noblest Gothic cathedrals in Germany and has a very well preserved medieval décor. The Halberstadt Cathedral Treasure is one of the most valuable and rich in Europe with its more than 600 surviving pieces. On the opposite side of the cathedral square is the Church of Our Lady from 1005, the only four-tower edits from the Romanesque period.

Not far from the Cathedral Square is the historic old town of Halberstadt. Here, the winding streets, cobbled streets and about 450 houses, some of which date back to the 16th century, are particularly impressive here.

The town hall in Halberstadt with Roland statue

Originally built in 1381, the Halberstadt town hall was so badly destroyed during the Second World War that it was completely demolished and a new development was planned. Between 1996 and 1998, a new building was built on the former site, in which the west facade was modelled on the old, destroyed facade.

At the town hall there is – as in Quedlinburg – a Roland statue, which is the second oldest Roland statue in Germany after the Roland in Bremen. The statue was carved in sandstone in 1433 and has a size of 4.20 m. The Roland – of which there are statues in many cities – is the statue of a knight with a sword and is considered a symbol of the city rights. Behind the town hall is the 13. to 14th century St. Martin’s Church with its towers of varying height, which are connected to a footbridge. 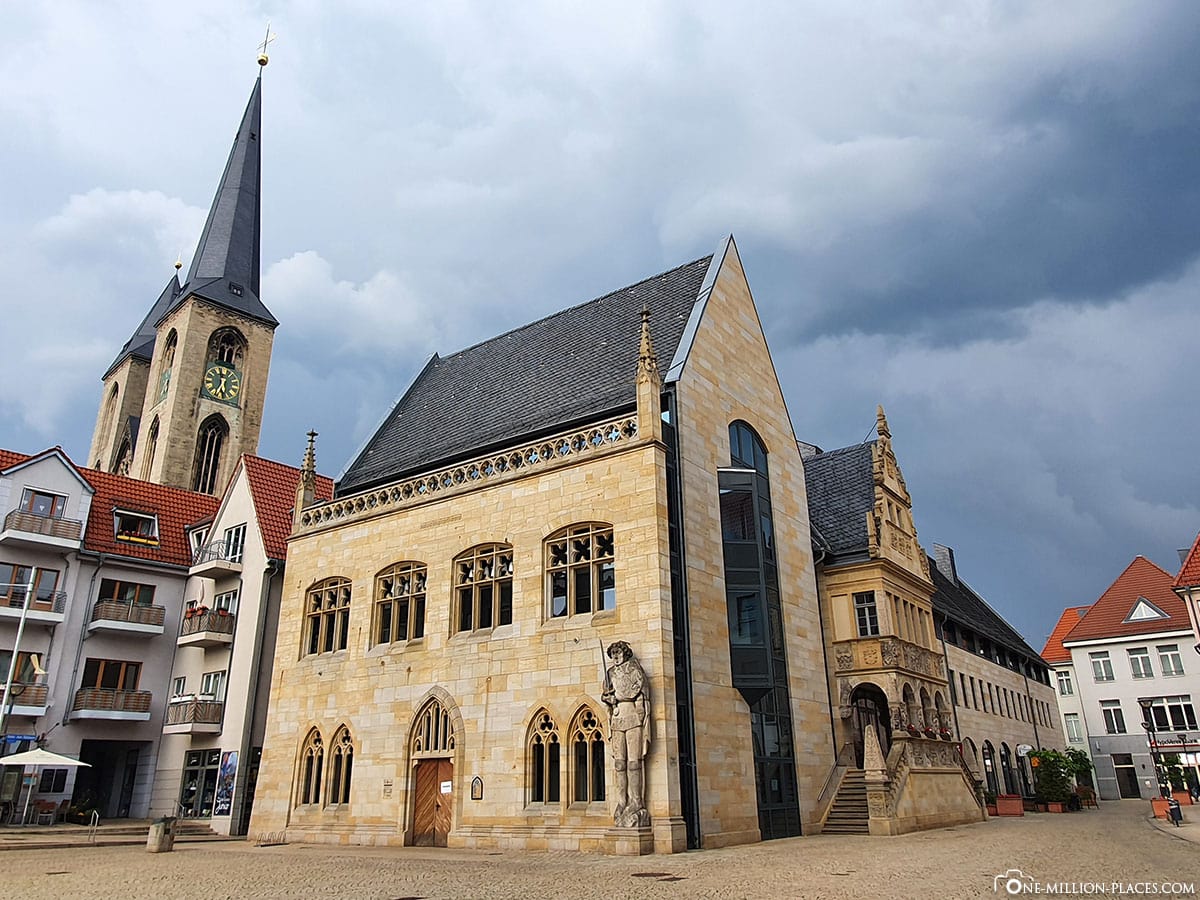 About 4 km south of the city centre of Halberstadt, there are the Klusberge – a small ridge with partly spectacular rock formations. To hike to the Klusbergen, it is best to park in the free parking lot in the Klussiedlung directly opposite the Diakonissen-Motherhouse Cecilienstift. The address is “Before the Klus 1” (link in Google Maps). From here you first walk along a forest path. On the right side of the way, a monument to the air was erected in memory of six airmen who died in the crash of a plane near Halberstadt in 1917.

The Klusberge are made of sandstone and extend over an area of about 600 m x 1,500 m. Over the course of the millennia, the soft sandstone has created bizzare rock formations, partly due to the weather, partly due to human influences, especially the three rock groups that are still visible today: five-fingered rocks, devil’s pulpit and klus rocks.

If you continue along the forest path from the Fliegerdenkmal, you will first pass the five-fingered rock.

Next you see the devil’s pulpit protruding from the forest. 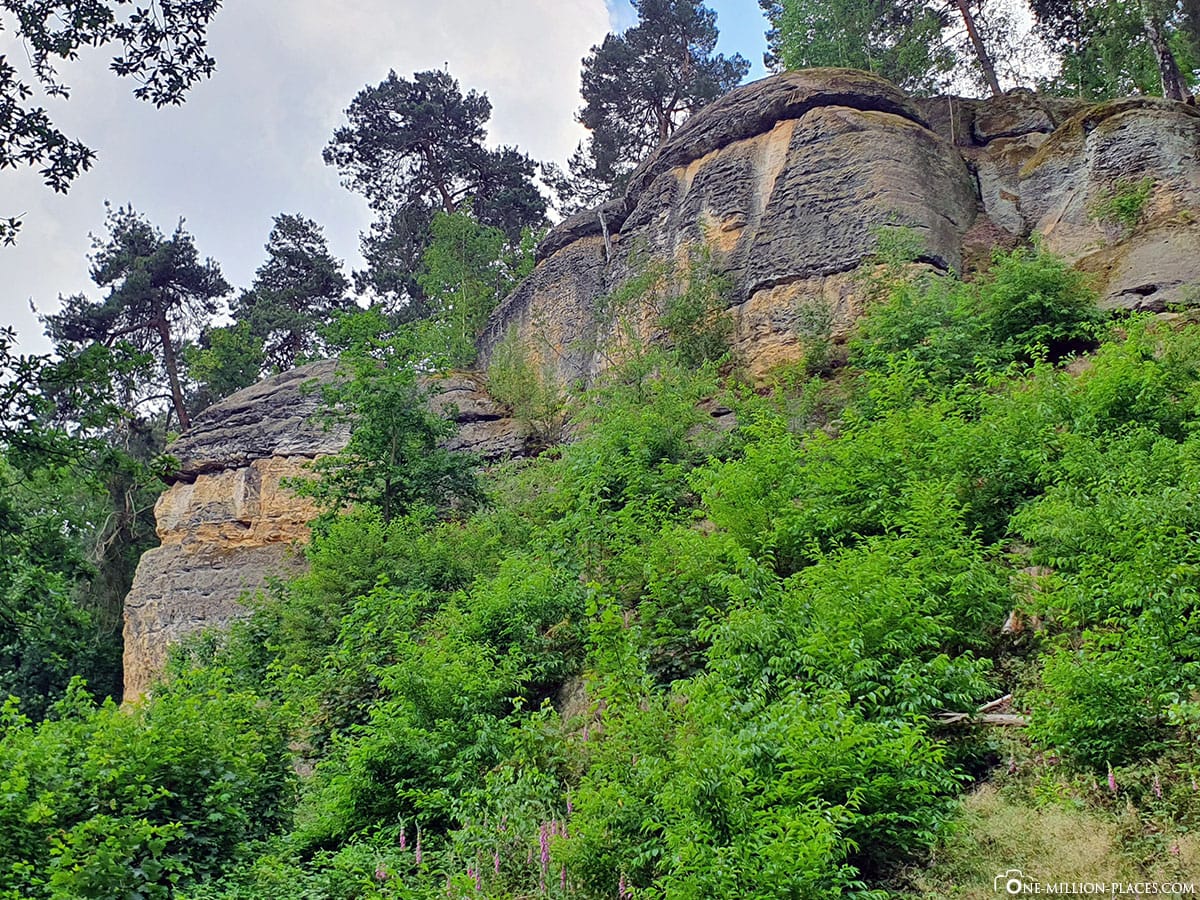 From there you have to walk a little further until you reach the Klusfelsen. And they were also our absolute highlight here in the Klusbergen.

The Klusfelsen are a complex system of rock spaces or rock caves. A first documentary mention of these cavities dates back to 1070; At that time, the area belonged to the monastery of St. Mary on the Quedlinburg Coin Mountain. This had a hermitage built in the Klusfelsen, in which hermits found shelter. In the Middle Ages hermits were called “Klausner” – this gave rise to the name “Klusberge und Klusfelsen”.

In addition to the caves, there are several other smaller artificial cavities in the Klusfelsen. Some areas of the rocks and caves are also cordoned off or supported by pillars to prevent them from collapsing. We spent quite a while on the rock formation because there was so much to discover and photograph. 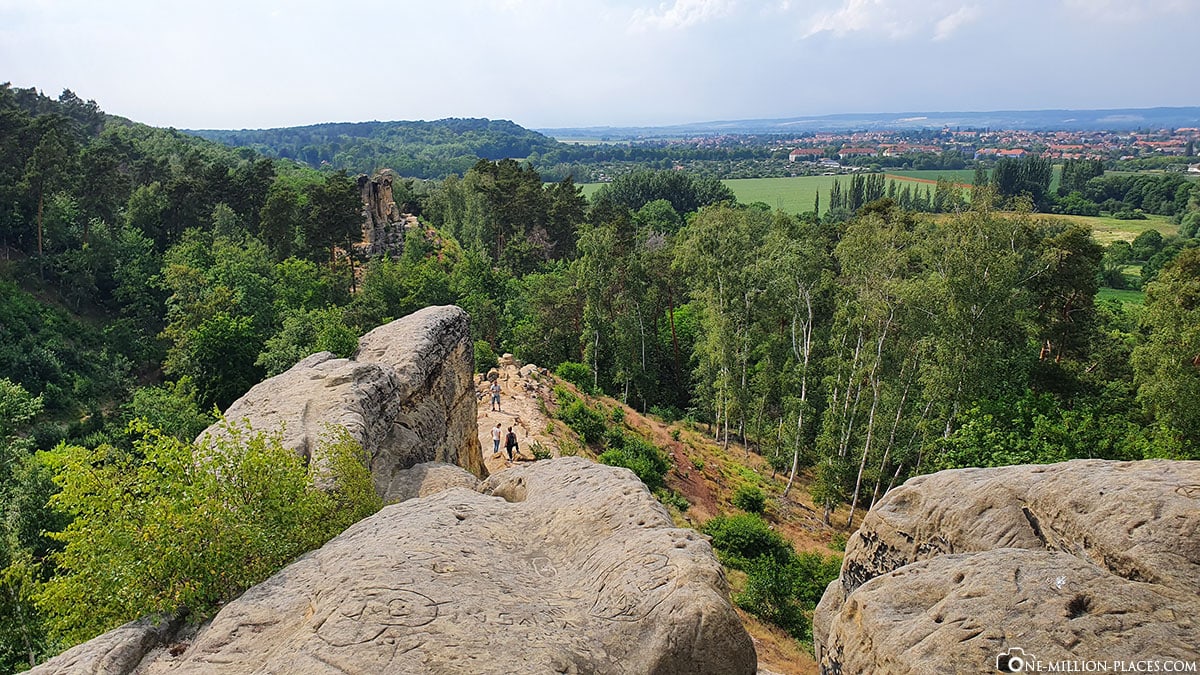 View from the Klusfelsen to the Five Finger Rocks and Halberstadt

Since we found very little information on the Internet about the Klusbergen in advance and there was not much going on on site, we suspect that they are not yet so well known nationwide. A real insider tip, which you should definitely put on the sightseeing list during a resin visit! 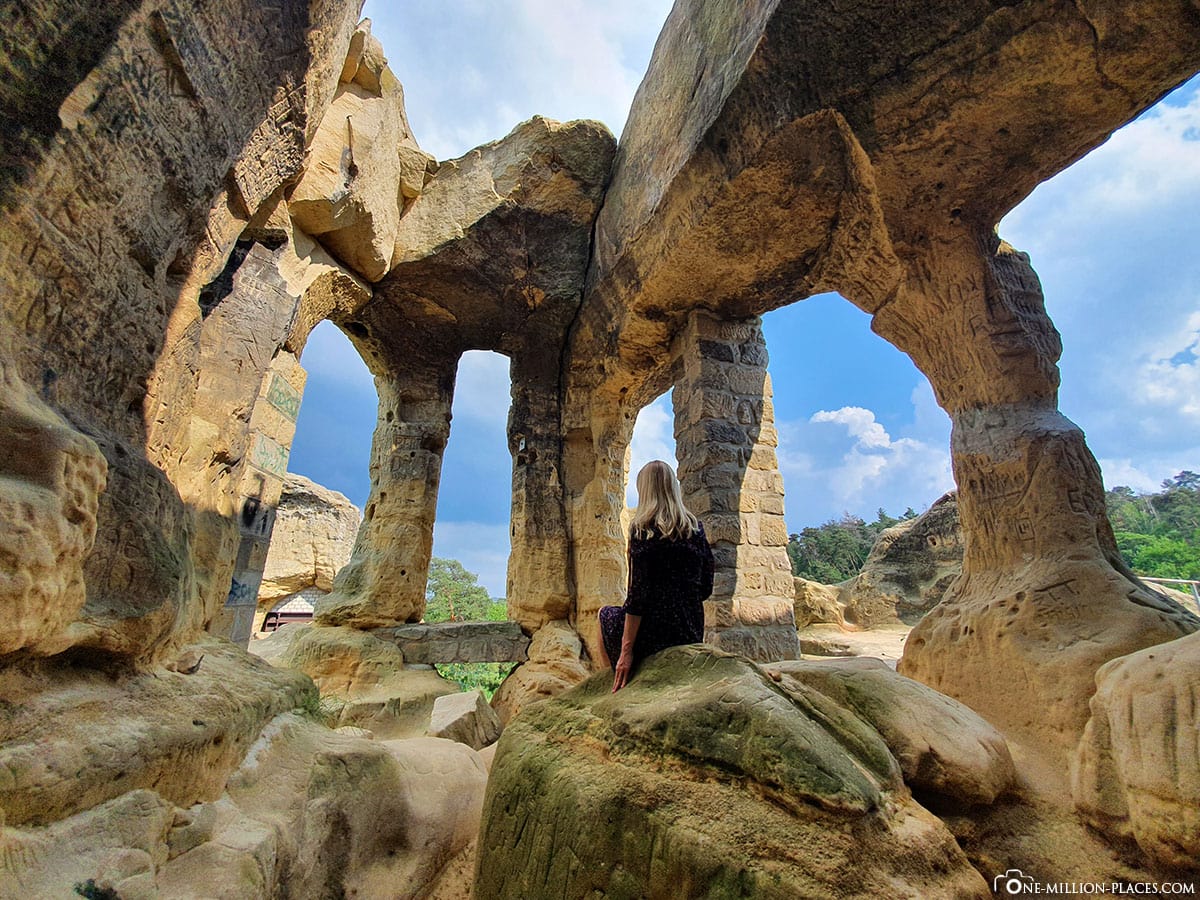