When we got the offer after ITB Berlin to explore a new cruise route in the Greek Aegean with Celestyal Cruises and Discover Greece, we were very happy. Greece, and the Cyclades islands in particular, have long been on our “da-would-we-to-be-still-to-go” list. The program of the new route includes the destinations Mykonos, Milos, Santorini and Crete – in short: the highlights in the eastern Mediterranean, of which we have already seen many pictures of other bloggers on Instagram and Facebook. So the anticipation was huge 🙂

How to get to Athens & Piraeus?

With Aegean Airlines we went from Frankfurt Airport via Thessaloniki to Athens. There was already a driver waiting for us, who took us to the port of Piraeus, about 50 minutes away. Unfortunately, the flights were very short in time, so we only arrived shortly before the ship left. But the crew was already waiting for us, so the check-in was super fast and we were already on our cabin within 10 minutes.

Things to know about Celestyal Cruises

We have to admit that we were not even aware of celestyal Cruises before our trip. Actually funny, because she has been on the seas for a while. Founded in 1986 under the name ‘Louis Cruise Lines’, the Cypriot shipping company was the fifth largest cruise operator in the 1990s. From 2010 the fleet ships were rejuvenated, old models were sorted out and the remaining ones were given a new paintwork. Since autumn 2014, the shipping company has operated under the name Celestyal Cruises and today operates three cruise ships: Celestyal Olympia, Celestyal Crystal and Majesty.

Our cruise ship for a week was the Celestyal Crystal, which was built in the early 1990s on the hull of a Viking Line ferry built in 1980. After a series of cruises in the Baltic Sea, but also in the Caribbean, the Crystal passed into the possession of Celestyal Cruises (then Louis Cruises) in 2007 and has been flying the Maltese flag in the Mediterranean ever since. The ship looks quite modern from the outside, has a length of 162 meters, is 25 meters wide and has 9 passenger decks. In total, the cruise ship has 476 cabins – 53 outdoor cabins with balcony, 260 outdoor cabins without balcony and 163 interior cabins – and can accommodate about 960 guests and almost 420 crew members. 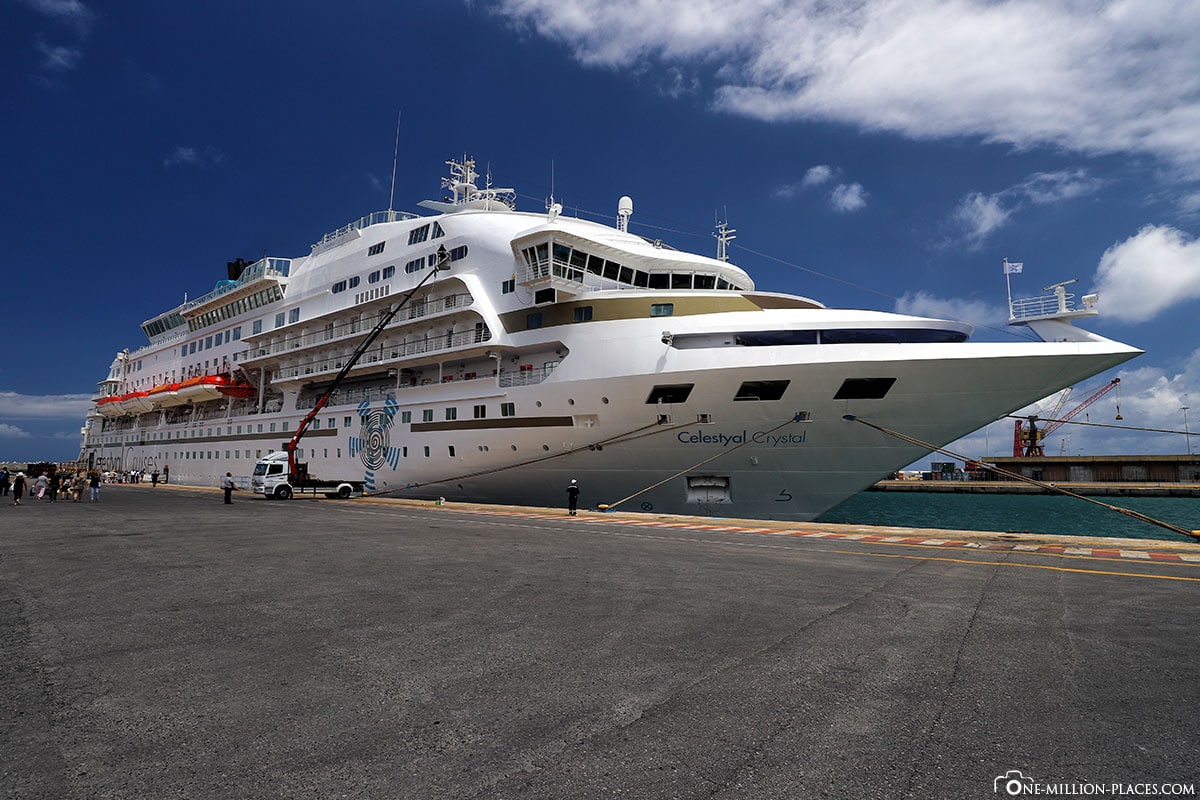 The ship Celestyal Crystal in the harbour

At Celestyal Crystal there is a range of different cabin categories, which differ mainly in their location on the decks: indoor cabins, outdoor cabins and balcony cabins. Our 2-bed outdoor cabin (category XF) was located on deck 7 (“Apollo”) and had an area of about 15 sqm. In addition to a double bed and a small sofa with sofa table, there was a small fridge, a TV, a desk and a spacious wardrobe that offered enough space to accommodate your clothes for a week. In addition, there was a private bathroom with shower, toilet and hair dryer.

What is of course a huge advantage over the interior cabins is the window, which is not open, but gives a very nice view in the morning. All in all, the cabin was ok, but unfortunately also a bit old-fashioned. For example, the temperature of the air conditioning system can be adjusted individually, but the strength cannot be adjusted, i.e. it could not be exhibited. Also the temperature of the shower water is always from extremely hot, too warm and cold fluctuates. We definitely felt comfortable in our cabin, but we’ve also seen more modern ships.

The all-inclusive offer on board

Celestyal Cruises wants to give its guests a carefree holiday, so all cruises include food, a wide range of drinks, taxes and gratuities. So there are no hidden costs on the passengers, which we find very positive! It is particularly well known from American cruise ships that in the end a “compulsory drink” has to be paid per day. To this day, we do not understand why this is not included in the travel price, if it is already mandatory. This is not the case with Celestyal Cruises, as everything is already included in the price 🙂

Here is a brief overview of the all-inclusive offer of the ship:

Only not included in the price are optionally bookable excursions, insurance sans and personal expenses (casino, spa, etc.).

Every evening, the ship’s own “Daily Program” is delivered to the cabins for the next day – even in German if desired. Here you will find an overview of all activities and service times on board. The cruise ship offers its guests an extensive entertainment program on board, which includes evening shows in the theater, live music, karaoke, a casino and a discotheque. Of course, you can also make yourself comfortable at one of the four bars and let the evenings end comfortably here.

The swimming pool on board is actually quite fine in terms of size in relation to the size of the ship. It is generally covered, but in fine weather the roof above can also be opened. However, the pool is located in the middle of Deck 9 – surrounded by fully occupied dining tables and the Helios Bar. However, the sunbeds are only on deck 10. This is somehow somewhat unfortunate solved, which is why probably no one was ever seen in the pool.

Also the wellness lovers on board the ship are not neglected, because there is a diverse offer of the spa center including sauna, fitness room and whirlpool. After a strenuous day of sightseeing, we also had a massage spoiled here – that did really well 🙂

Even though our cruise ship was in the EU for the majority of the journey and therefore no roaming charges are incurred for German mobile phone users, it is possible to buy WiFi access on board. Unfortunately, the prices for this are quite high: for one hour you pay 7 euros for the Internet, 16 euros for 3 hours and 25 euros for 6 hours.

Food & Drinks on the Ship

The all-inclusive offer also includes an extensive selection of alcoholic and non-alcoholic drinks on board. This is not really the case on every ship – on some you have to pay for cocktails, liqueurs etc. This is not the case on the ships of Celestyal Cruises. There is also a premium package, which you can book for 14 €/day per person in addition, so that the champagne or the freshly squeezed orange juice are included at breakfast. If you attach great importance to premium spirits and high-quality drinks, this additional package might make sense, but otherwise you will also be well supplied.

A bridge visit to the Celestyal Crystal

On the second day of our cruise we had the opportunity to visit the command bridgein the morning. This is kind of exciting, because you are already interested in what the headquarters of the nautical guard officers look like. The cruise director personally took the time to explain to us exactly how the ship is maneuvered and to answer all our questions. In the rowhouse there are command systems, the rudder, communication equipment and other countless nautical instruments, of which one has only a quiet idea of what they are used for. In another part of the bridge, the nautical charts are on a desk. On both sides of the rowhouse there is a bridge nock. For example, when manoeuvring, the officers stand in a port. The ship has been on the hump for a number of years and has of course been extended and modernized since its construction, so that the technology is also up-to-date. Nevertheless, the turquoise colour in particular really still looked like an original from the 1970s 🙂

The 7-day cruise with celestyal Cruises has taken us to the classic but also most interesting Cycladic islands of the Aegean Sea. Like a cruise in the Caribbean, we find that a cruise in the Aegean Sea is predestined to get to know the many small islands in a short time – and in a relaxed atmosphere without having to constantly pack your suitcase and catch a plane.

Greece, by the way, has more than 3,000 islands – from the largest island of Crete to small islets. The highest elevation on an island is the peak of Psiloritis in Crete at over 2,400 meters. Other known islands are Lesbos, Rhodes, Kos, Santorini, Corfu, Samos, Naxos, Zakynthos, Kefalonia or Mykonos.

And that was our route for a week: