Day 16 of our world tour took us to South America for the first time. Just in time at 7.27 in the morning, Rio de Janeiro has filled us today with bright blue skies, sun and… only ONE suitcase awaits 🙁

Arrival in Rio de Janeiro & transfer to the city

It was almost clear that this would happen at some point with 50 flights. Strangely, a suitcase arrived from us, we also had a priority band on our business flight AND that the missing suitcase was already declared when the baggage belt had not even started. Well, an airport employee then filled out the form with us and wanted to have our hotel address. He could not give us a proper explanation for the reason, because he spoke virtually no English. The suitcase was then delivered to the hotel the next day.

From Rio de Janeiro International Airport Galeo, it’s easy to get to all the hotels of Copacabana or Ipanema. Simply take one of the blue buses of the line 2018 directly in front of the terminal. It costs only 13.50 real per person compared to a taxi (which can cost 70-100 Real depending on the time of day), which is about 4 €. The journey takes about 1 hour and if you tell the bus driver, he even lets you out right in front of the hotel. That’s a good thing, because by now it was already a hot 35 degrees. 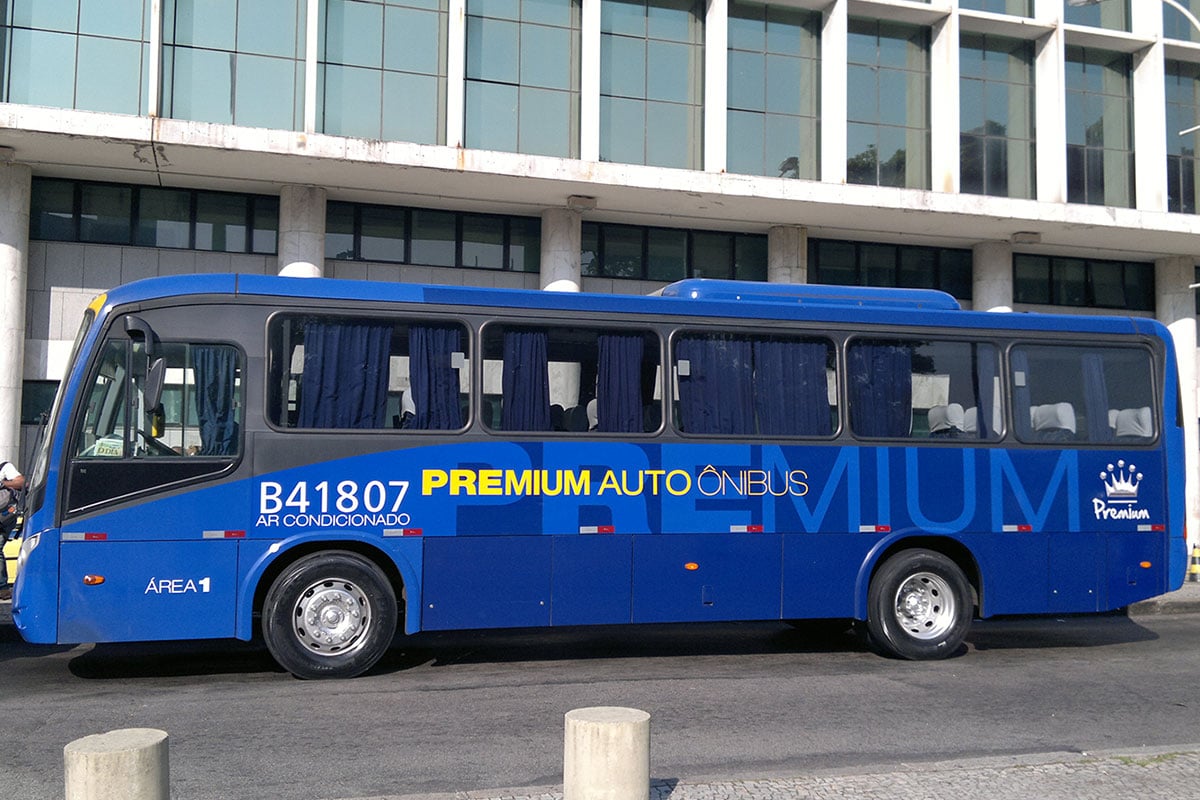 The bus from the airport to Rio

Our hotel on the Copacabana

For Rio we had chosen the Hotel Golden Tulip Regente (now called Grand Mercure Rio de Janeiro Copacabana) directly at the Copacabana at the height of Posto 5. So the location is super central.

Hotels on the Copacabana are incredibly expensive, especially on New Year’s Eve! Since we already have this hotel in June via ebookers incl. 20 voucher code, we have booked for 5 nights incl. very good breakfast paid only 620 €. And a free upgrade to a business room was even higher at check-in. When we compared the prices for the different hotels on New Year’s Eve again in December, we also got prices of 600 € – this time for only one night!

We stayed in Rio on New Year’s Eve and chose the Hotel Golden Tulip Regente because of its location directly on the Copacabana and the unbeatable price on New Year’s Eve (125 € per night incl. breakfast). A free upgrade in a higher room category was available above, which we were very pleased about. The hotel offers free beach towels as well as free sun loungers and umbrellas that can be fetched sicv directly on the beach. The breakfast buffet was large and very good. There was something for everyone. City buses in all directions leave in the street behind the hotel. A supermarket is also within walking distance. All in all a great hotel, which we are happy to recommend.

The rest of the day we used to explore the area a little bit. First we walked along the Copacabana. Everything was already under construction here for tomorrow’s New Year’s Eve party.

The beach of Ipanema

Afterwards we went briefly to the neighbouring beach of Ipanema. We watched the sunset from the rocks of Arpoador.

The Trem do Corcovado cable car

On New Year’s Day we took advantage of the long breakfast times in the hotel and slept nicely. For this day we had planned the christ statue “Cristo Redentor” on the Corcovado mountain, which was originally erected on the occasion of the centenary of Brazil’s independence. The bus system in Rio is very well developed and you can actually get anywhere by bus. A trip always costs 3 Real, which is a little less than 1 euro – no matter how many stations you drive. We drove to the station where the Trem do Corcovado departs – a 3.8 km long cable car that takes you to the 710-metre-high Statue of Christo.

Our tip: make sure to reserve tickets in advance! Unfortunately, we had not done this and only got tickets for a trip 3 hours later. The train runs every 20 minutes and you are assigned a fixed time, which unfortunately you cannot bypass. We used the time until then to explore the city center of Rio de Janeiro a little bit. However, this (since New Year’s Day) was almost extinct. Back at the cable car, the weather has unfortunately changed abruptly. Clouds have risen and there was the first rain before we got into the track. Annoying!

Arriving at the top it rained lightly again and again in between. But luckily there were also times of non-rain, which we used to enjoy the beautiful view of Rio and take photos. In total we spent 2 hours at the statue of Christ. On the way back to Copacabana we saw hundreds of white-clad people walking to the beach, all of them – armed with folding chairs and food/drink – wanted to go to the big New Year’s Eve party. You can read about the fireworks at the Copacabana on New Year’s Eve here.

The unique landscape around Rio de Janeiro (Carioca landscapes between mountains and sea) has been part of UNESCO’s World Heritage Since 2012. Rio de Janeiro is an “extraordinary fusion” of man-made and natural beauty. Unesco will also designate the Brazilian city of Rio de Janeiro as the world capital of architecture in 2020 – the first metropolis ever to receive this title.