The island of Mykonos, home to just under 10,000 inhabitants, is one of the most famous Greek islands in the Aegean Sea and is a popular destination for many tourists. That the island should be the first stop of our cruise, we were incredibly pleased, because here is among others the beautiful city Mykonos Town and the UNESCO World Heritage Site of the ancient city of Delos.

Celestyal Cruises offers its guests a free shuttle from the new port in Mykonos (Tourlos) to Mykonos City every half-hour. You can also walk the nearly 3 kilometers, but when the sun is burning, such a shuttle is somehow quite practical. 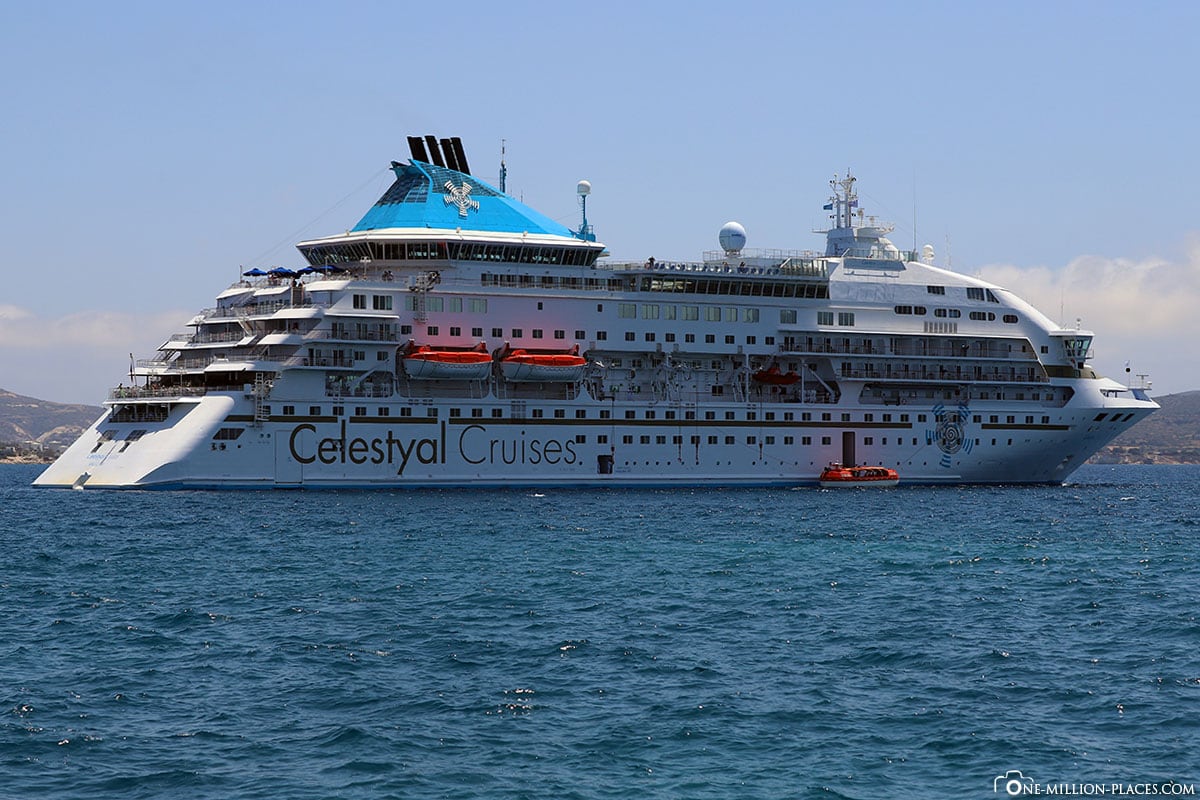 From Mykonos by ferry to Delos

For us today a trip to the neighboring island delos was on the program. From the stop where the bus shuttle dropped us off, we walked to the center of Mykonos town to get to the old port of Mykonos. On the way there we could get a first impression of the picturesque town with its small, winding streets and the many white houses with colorful shutters. A dream – we were really looking forward to it when we had time in the afternoon to stroll a bit through the alleys.

Ferries depart from the old port at regular intervals to the neighbouring island of Delos. Tickets for the boat transfer or for a guided tour on the island can be purchased in the complete package, for example via Delos Tours (approx. 50 Euro). But you can also simply buy the ferry tickets (20 euros back and forth), pay the entrance fee on site (12 euros) and explore the facility yourself – this saves a bit of money for the travel 🙂

The ruins of the ancient city of Delos

The ferry boat was occupied to the very last place and took us within about 30 minutes to Delos: once a sacred site for the Greeks,today a huge archaeological site , which was added by UNESCO to the list of World Heritage Sites in 1990. Delos was of great importance in Greek mythology, because it is legend that the Greek gods Apollon (God of Light) and Artemis (Goddess of the Moon) were born here. 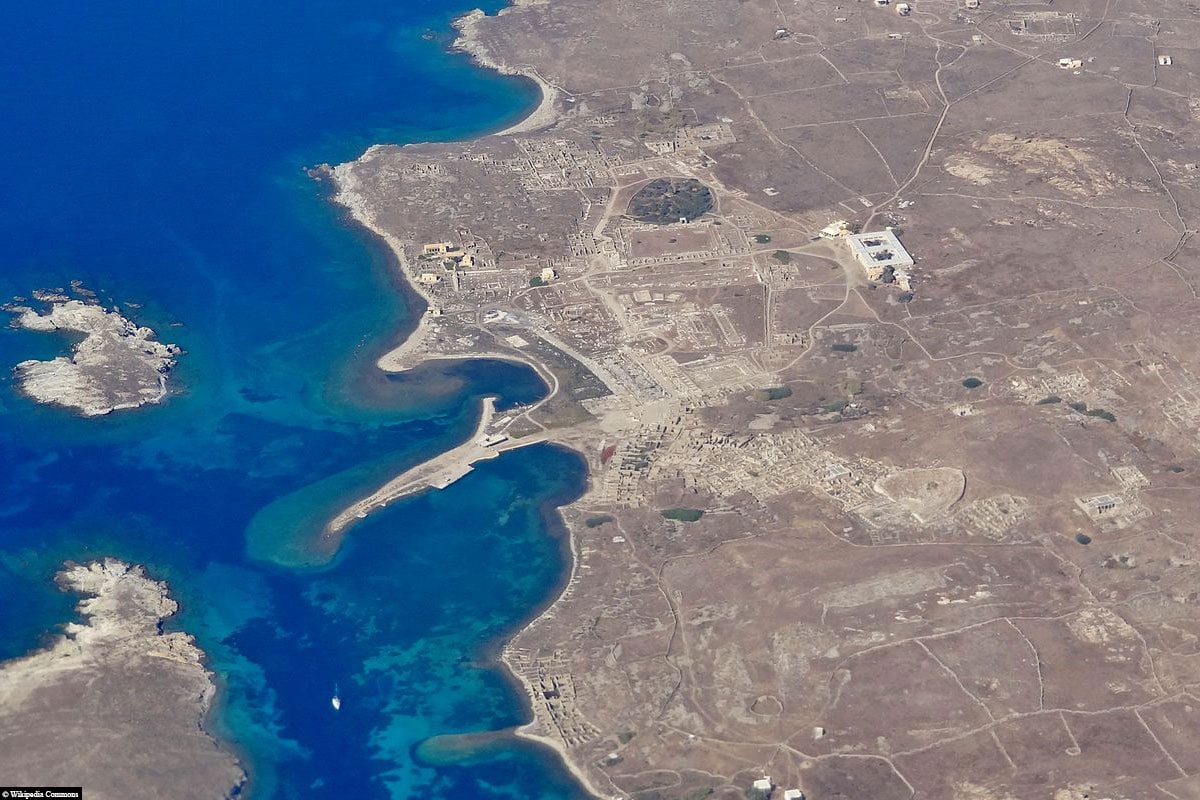 Aerial view of the ruins of Delos

Excavations on the island of Delos began in 1872 and continue to this day. A large part of the cosmopolitan Hellenistic city was uncovered and numerous objects were found, which are now on display in the island museum: vessels, statues, sculptures and countless inscriptions. In order to preserve the World Heritage, extensive conservation and restoration work has been carried out on the site in recent years.

A guide accompanied us on the island and showed us the most important things on the site. These included the “House of Dionysus” with beautiful columns, the “House of Cleopatra”, the remains of an old theatre, “Agora of the Kompetaliastae” – a former market place and countless other foundations that are only supposed to indicate the foundations of the old buildings. The excavation site appears somewhat disorderly at one point or another; more like a lapidarium – like a mere collection of stones and sculptures right at the excavation site.

The ruins can only be explored on foot. Since everything is very stony and dry, you should have enough water, sunscreen and a hat with you – the Greek sun can burn hellishly without realizing it immediately. The terrain is really insanely large and we didn’t manage to run everything until our return trip by ferry to Mykonos. Unfortunately, we have not seen the museum that can be visited. If you really want to explore everything from this huge archaeological site, you should definitely plan 3 to 4 hours.

We have found an interesting map of what the ancient city should have looked like. The size of the city at that time is already very impressive! 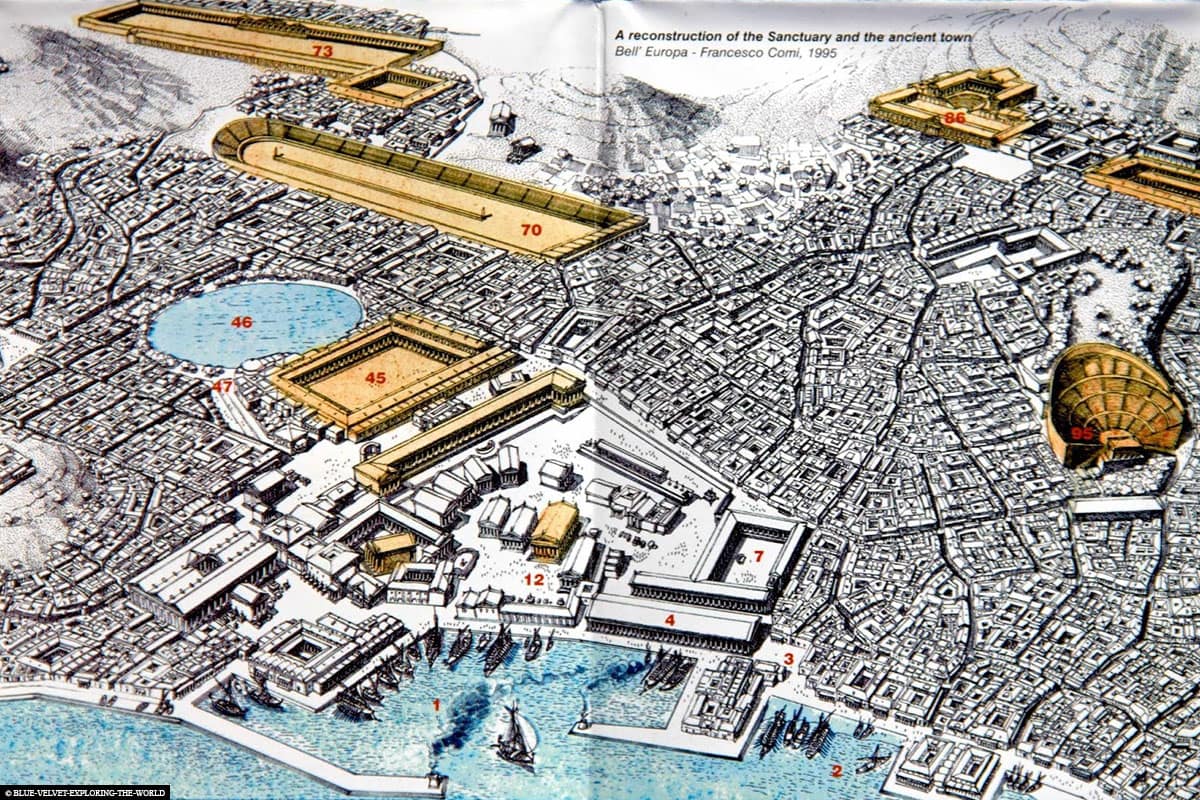