For today we had planned to explore the adventure world in Thale and were looking forward to rides with the cable car and the chairlift, fantastic views and the Wildlife Park.

Things to know about the Bodetal & Thale adventure world

Together with other districts, Thale forms the holiday region Bodetal, which with its steep rock faces, numerous mixed forests and flowering mountain meadows is considered the “most powerful rock valley north of the Alps”. Due to the multitude of legends and myths about witches & devils, dwarves & giants as well as gods & mythical creatures, the Bodetal is popularly referred to as legend resin.

“Cable cars Thale Adventure World… where the devil is going on in the Harz!” – with this slogan, the Thale adventure world advertises itself with numerous attractions. In addition to the two cable cars, there is much more to discover here, such as a mini golf course, a fun park, a summer toboggan run, a climbing forest and much more. A true paradise for holidays with the whole family. Suitable accommodation options are even available directly on site with the holiday home village Thale.

We parked our car in the central large car park in Thale free of charge (link in Google Maps). From here you walk along the Bode for about 10 minutes to the adventure world. Since we wanted to take the cable car to Hexentanzplatz as well as the chairlift to the Rosstrappe, we decided on the combined ticket “SuperSpar II” for 10.50 EUR per person, which includes return tickets for both lanes. 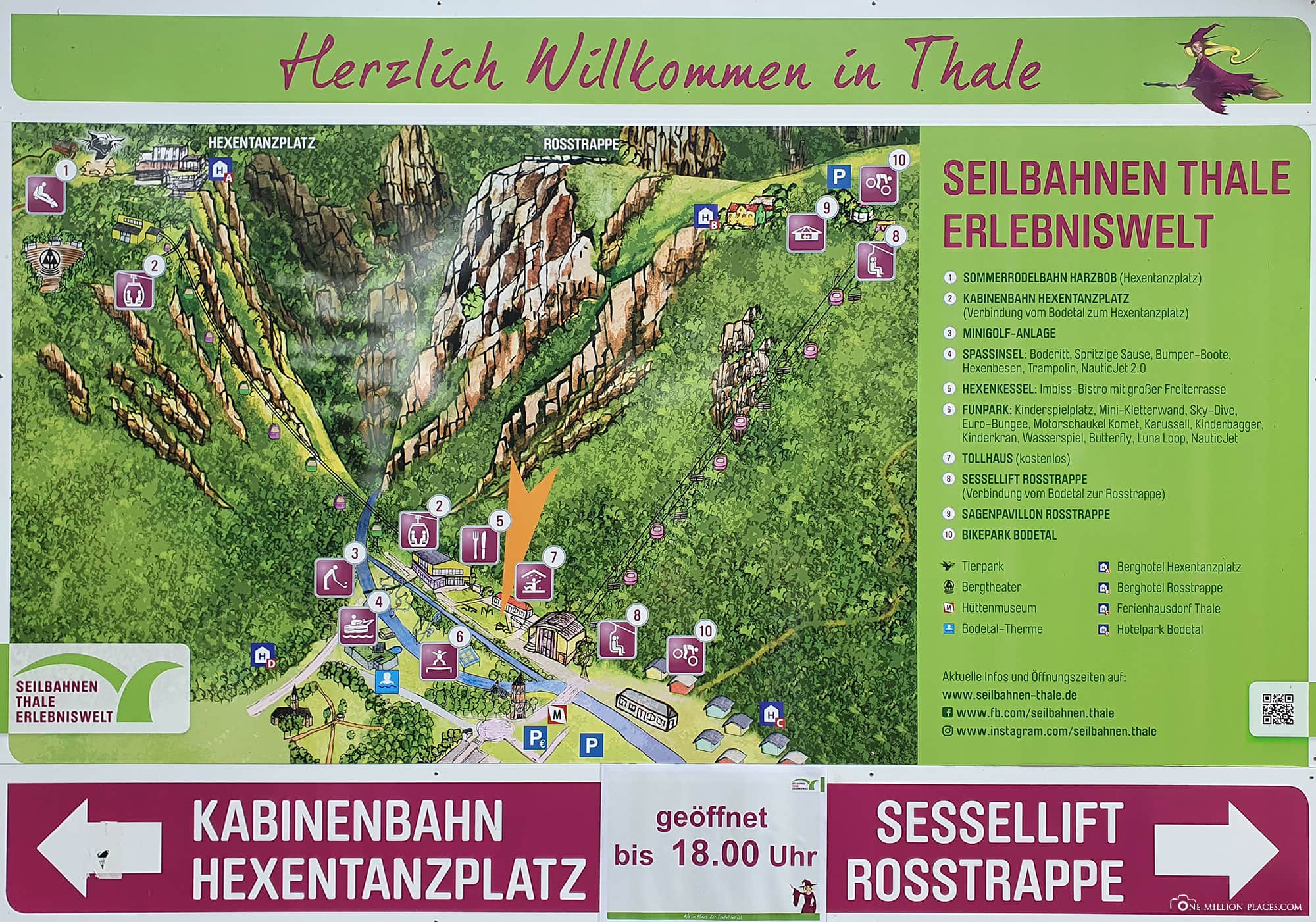 A map of the Thale adventure world

With the cable car to the Hexentanzplatz

As soon as we bought our tickets, we were already sitting in the cable car on the way to the Hexentanzplatz. Since there wasn’t much going on, we even had a gondola for ourselves. With the cable car we floated over the Bodetal and were able to enjoy the fantastic view into the distance until we arrived on the 454 meters above sea level, which extends opposite the Rosstrappe on an area of about 60 hectares.

According to legend, the Hexentanzplatz is supposedly an old Saxon place of worship, where festivals were held especially on Walpurgisnacht (night from 30 April to 1 May) in honour of the forest and mountain goddesses. This cult was forbidden by immigrant Christian francs according to tradition. The Saxons, however, resisted this ban and outwitted the Frankish guards by dressing up as witches and coming on brooms. The guards were chased away and from then on told about the activities of the witches and devils on the witch dance place.

Centrally located on the Hexentanzplatz are the most popular photo motifs: On the one hand, the Witch’s Ring is placed here, a stone circle consisting of boulders with the three bronze figures witch, devil and pig-dog hybrid. And on the other hand, there is an upside-down witch’s house,which you can also visit for an entrance.

During our walk over the rocky plateau we enjoyed the view of the Bode Valley from various viewpoints and saw the Bergtheater Thale – one of the oldest natural theatres in Germany with 1,350 seats – and the Walpurgishalle.

On the Hexentanzplatz there is also a small animal park, which we visited for 7 EUR per person. The zoo is located in a beech and oak forest and houses more than 70 animal species that are or were native to the Harz. Most enclosures are generously laid out and largely natural. For example, there is a 3,200 m2 wolf area, a 5,200 m2 bear forest and a 1,100 m2 lynx enclosure.

A map of the zoo can be downloaded here as a .pdf version.

With the chairlift to the Rosstrappe

When we arrived with the cable car back down in the valley, we walked a few meters further to the chairlift station, swung into our seats and we went up to the Rosstrappe, a 403 m high granite rock that rises above the Bode Valley.

After the 7-minute drive, in which we have overcome a height difference of 244 m, we have arrived at the mountain station. Up here, since the middle of the 19th century, there has been a mountain hotel with a beautiful viewing terrace. To get to the Rosstrappe, walk past the hotel and then along the forest for about 10 to 15 minutes. On the way you pass again and again past beautiful viewpoints until you reach the end point. From here you have a great view of the opposite Hexentanzplatz as well as the Bodetal and Harz foreland.

On the Rosstrappe rock there is a fabled hoof print,which also gave the rock its name. According to the “Rosstrappen-Sage” the royal daughter Brunhilde was persecuted by the knight Bodo, who wanted to marry her against her will. She then fled on a white horse, but suddenly a deep abyss appeared in front of her. On the jump to the other side of the rock, the hoof print of her horse was imprinted in the rock, which can still be seen today. She also lost her golden crown, which sank in the river. Knight Bodo plunged into the depths during the chase and has been guarding the princess’s crown in the bode boiler as a black dog ever since.