Vernon was the last stop of our river cruise with A-ROSA before we went back to the starting point to the metropolis Of Paris. The small town is picturesquely located in the valley of the Seine, halfway between Rouen and Paris. In addition to visiting an imposing collegiate church and beautiful half-timbered houses in Vernon, we were following in the footsteps of a famous artist in the neighbouring village of Giverny.

Things to know about Vernon

Vernon is a small town with about 24,000 inhabitants. Although Vernon was badly destroyed during the Second World War, the city still has many of the 15th-century half-timbered houses typical of Normandy and an imposing Gothic collegiate church.

The pier of our ship A-ROSA VIVA was very centrally located near the bridge Pont Clemenceau, so that we could reach everything from here in Vernon within walking distance. Since we only planned to vernon until 1.30 p.m., we have already made a plan in advance, which we wanted to see in the short time. In the morning we walked from our ship to the station of Vernon, because here the bus left to Giverny. After looking at the gardens and house of impressionist artist Claude Monet in Giverny for 1.5 hours, we went back to Vernon. Here we took a short walk through the city and also looked at the beautiful old half-timbered mill and the Chateau des Tourelles on the Seine. 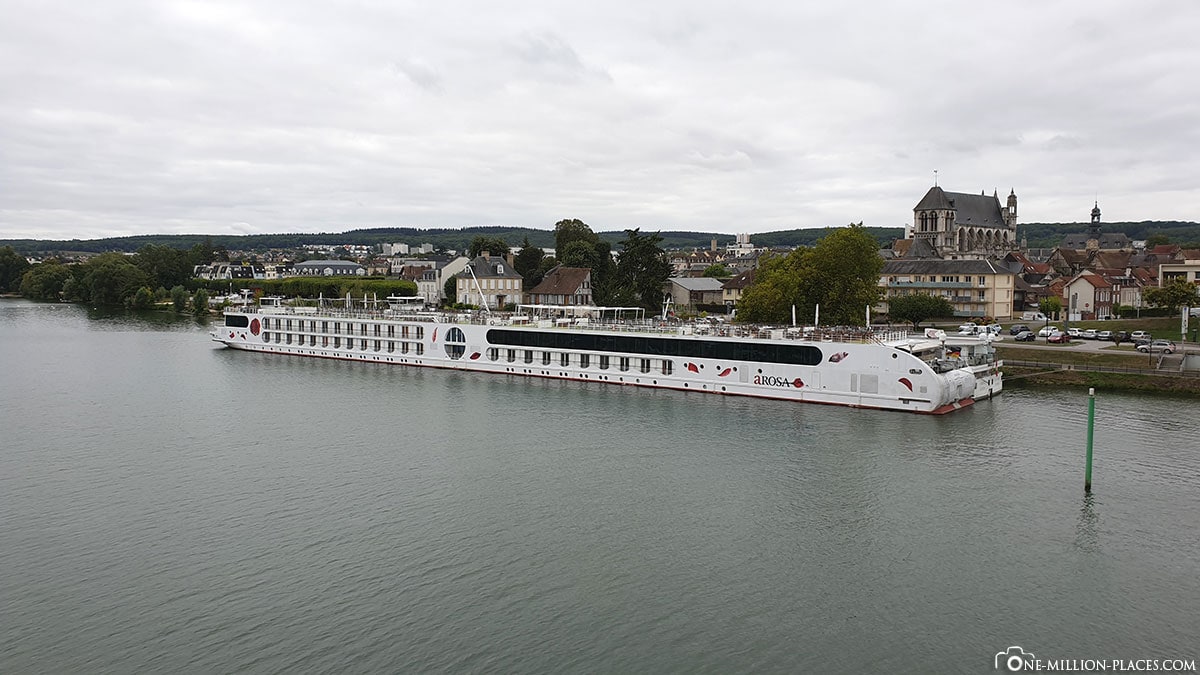 The pier of the A-ROSA VIVA in Vernon

You can also download the port guide of Vernon here as a .pdf version. 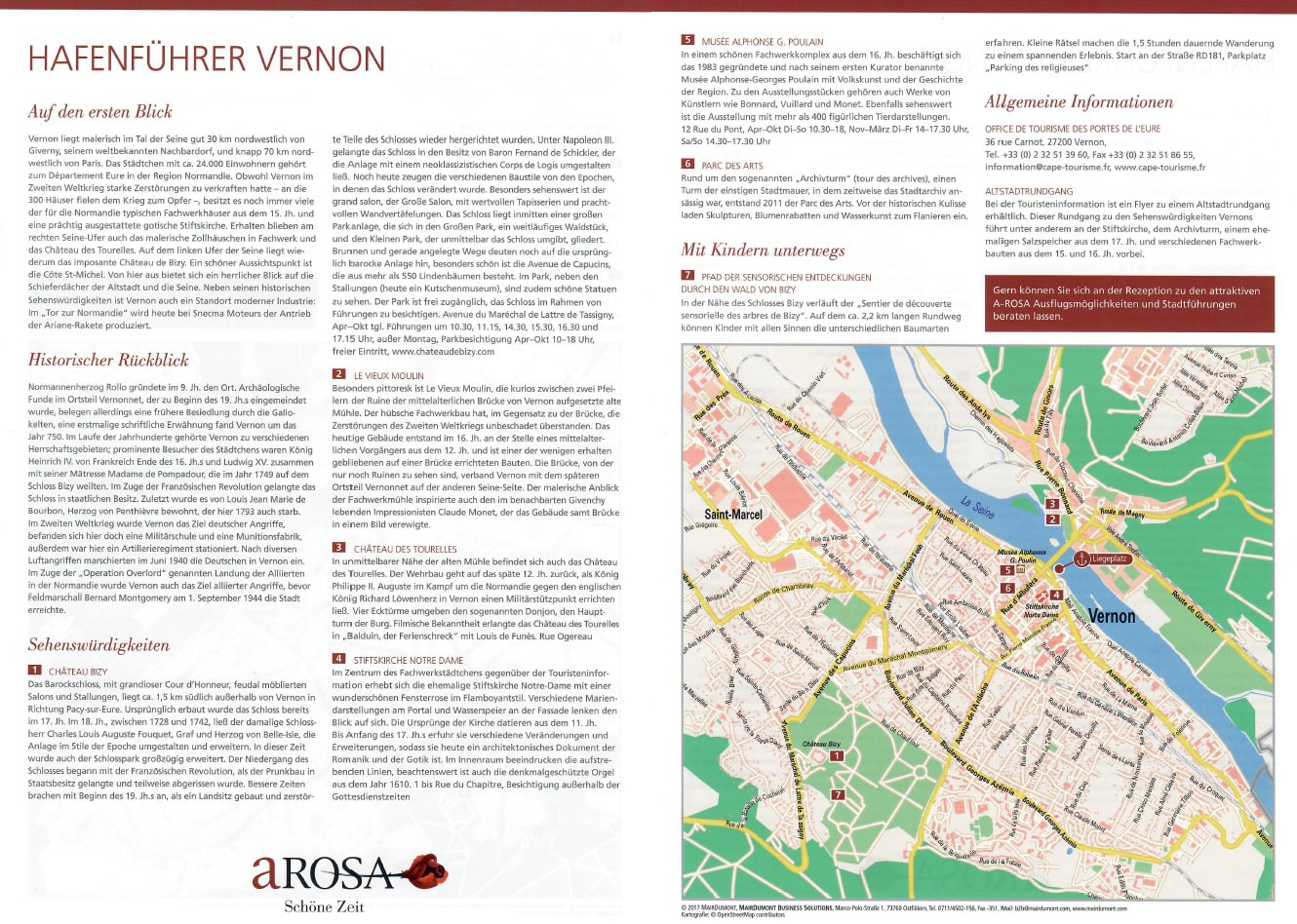 The Old Mill on the Seine

The old mill in Vernon is one of the photo motifs we were looking forward to most on our river cruise. It is located directly on the Seine River and is a well-known Normandy motif for painters and photographers. From our ship we were able to reach the mill within a few minutes on foot and when we arrived, almost no other tourists were there. Perfect!

The “Le Vieux Moulin” is a pretty half-timbered building, which is placed between two pillars of a medieval bridge. In contrast to the bridge, the half-timbered house from the 16th century survived the Second World War unscathed.

The old town of Vernon

In the centre of Vernon is the Gothic church of Notre Dame with a very large window rose on the front facade. The origins of the church date back to the 11th century, but it was built over several epochs, thus combining Romanesque and Gothic architectural styles. Since no divine service has just taken place, we were also able to visit the church. In the interior there is a monument-protected organ from the beginning of the 17th century. The church is located in the middle of old, typical half-timbered houses not far from the banks of the Seine. Directly opposite the church, the Mairie, the mayor’s office and the municipal administration are housed in a magnificent building.

The Archive Tower (“Tour des Archives”) is a tower of the former city walls. At times, the city archive was housed here. Since 2011 is located around the tower the so-called Parc des Arts with sculptures, flower discounts and water art.

On the other bank of the Seine – next to the old mill – is the Chateau des Tourelles, a 12th-century castle.

The neighbouring village of Giverny, about 5 kilometres from Vernon, has gained worldwide fame from the impressionist artist Claude Monet, who has settled here for 43 years of his life. Since the artist was known to us, among other things, through our art lessons in school, we wanted to take a closer look at the estate and especially the famous garden.

Claude Monet was an important French painter and is considered one of the founders of Impressionism. He was born in Paris in 1840 and died in Giverny on 5 December 1926 at the age of 86.

In his early years, he worked as an artist in Le Havre and began drawing caricatures of friends and local residents. In 1874, Monet presented to the public in Paris one of his paintings called “Impression, Sunrise”, which was regarded by critics as “unfinished” and was then mockingly called “Impressionism” – based on the title of the picture. This event is considered to be the birth of this new art direction, which is more about impressions, light and colours, and not so much about the exact reality.

Claude Monet’s paintings are now among the most expensive paintings in the world. Some of his most famous works are “Impression, Sunrise”, “Water Lilies”, “The Walk. Woman with parasol”, “Camille in green dress”, “San Giorgio Maggiore in the twilight” and many works of his series of calm water lily paintings.

Claude Monet’s home and gardens are located about 5 kilometres from Vernon in the neighbouring village of Giverny and are open from 9.30 am to 6 pm from April to the end of October. In winter, the plant is closed. The entrance fee for Claude Monet’s house and gardens is EUR 9.50 for adults. If you also want to visit the Museum of Impressionism, you pay a total of 17 EUR.

What is the best way to get to Claude Monet’s gardens?

There are several ways to get from Vernon to Giverny:

(1) Running: The cheapest but also the most time-consuming option. It takes about an hour to complete the approximately 5 km long route. We have painted in GoogleMaps the way you can look at here.

(2) Bus: We used the first shuttle bus to Giverny from Vernon station. It is adapted to the train from Paris and leaves the station at 9.15 a.m. The price for a single trip is 5 EUR, for the return trip also. There is no discounted price if you buy round trip together. The ticket can be purchased directly on the bus. The drive to the parking lot in Giverny takes about 20 minutes, from there you walk another 5 minutes to the entrance of the gardens. More information can be found here.

(3) Taxi: A taxi ride is certainly the easiest and most convenient Variane, but also a little more expensive. On an official page we read that a one-way trip costs about 20 EUR.

(4) Excursion with A-ROSA: Through the excursion program of A-ROSA you can take part in the 3.5 hour excursion “Monets Giverny”, which costs 36 EUR.

Claude Monet’s gardens consist of two areas: a flower garden called “Clos Normand”, which is located in front of the house, and a Japanese-inspired water garden across the street.

The flower garden directly in front of the house has made a rather unkempt, feral impression on us. Some parts of the garden were really overgrown. But there is also a justification for this, as we found out in the aftermath. Claude Monet did not like organized or restricted gardens. He combined the flowers according to their colors and let them grow completely freely. And so you can find flowers of different heights, combined with fruit and ornamental trees or different types of roses. The focus was always on the colours, so it happened that very simple flowers such as daisies were mixed with very rare and expensive flower varieties on a bed.

On the edge of the flower garden is the former residence of Monet, which we wanted to see right after our arrival in the garden. Unfortunately, we were not the only ones: already in the morning a long queue of tourists formed here, who all wanted to enter the house. Since only a relapsed admission was granted, we had to accept a short waiting time. The advantage was that later not so many people were in the house at the same time, which was quite pleasant. So you could move more freely and was not “pushed through”.

Claude Monet moved into the house in 1883 – the first 7 years he lived for rent, in 1890 he bought the house and later also the associated land. When Claude Monet died in 1926, his son Michel inherited the house and gardens he bequeathed to the Academie des Beaux-Arts in 1966.

Both the house and the gardens were very neglected after the Second World War: shattered windows due to the bombings, rotten wooden buildings, a workshop overgrown with plants, etc. Many years and conversations with Monet’s contemporaries were necessary to bring the house and gardens into a passable state and to give them the splendour of earlier times.

The water garden is the second of Monet’s gardens. It is located across the street and can only be reached from the house via an underpass. Monet had only acquired this area many years later, in 1893.

In the water garden you will find the famous Japanese bridge, which is almost completely covered by flowers, as well as other smaller bridges, mourning pastures, a small bamboo forest and especially the famous water liliesthat bloom all summer long. This setting was often used by Monet as a motif for his impressionist works of art, which later gained world recognition.

What was going on in the water garden was really madness. Even if you don’t see it in the photos, it was teeming with tourists. That’s why we quickly walked around the water lily pond, took some pictures and then ran back to the other side because it was too crowded for us.