After visiting the giant sequoias of Mariposa Grove in the morning, we continued towards Yosemite Valley. Before that, however, we made a detour to the 2,200 meter high Glacier Point.

Glacier Point is a viewpoint at an altitude of 2,200 meters with a magnificent view of Yosemite Valley, Half Dome, Yosemite Falls, Vernal and Nevada Falls and the highlands of Yosemite National Park.

The viewpoint is easily accessible for cars via the 26 km long Glacier Point Road – but only from about the end of May to October/November, depending on the snow conditions. In winter, you can only get there with skis or snowshoes. From Yosemite Valley it takes about 1 to 1.5 hours by car to Glacier Point. If you are on the road, you can reach Glacier Point via the 7.7 km long Four Mile Trail – the hike should be very strenuous, but scenically very beautiful.

From Glacier Point car park, a short, cobbled path leads to the observation deck, which is about 1,000 meters above Yosemite Valley. We had really great weather here again for the season and could even walk around in a T-shirt. The view from Glacier Point is simply fantastic and was for us one of the highlights of our visit to Yosemite National Park.

The Half Dome – The landmark of the National Park

From Glacier Point you have a super beautiful view of the Half Dome, which is considered the landmark of Yosemite National Park. The Half Dome is a granite dome at the eastern end of Yosemite Valley and is named after its characteristic shape: it looks like a dome cut into two halves. The Half Dome rises more than 1,444 meters above the valley floor and consists of the magmatic rock Granodiorite.

Many hikers are attracted to the Half Dome over a 25 km long route. This is indeed possible; you have to “only” participate in a lottery and hope to get one of the coveted tickets. There are no more than 300 tickets to be awarded per day. It is best to inform yourself in advance on the website of the National Park.

The View Point tunnel is a beautiful vantage pointlocated at the eastern entrance of the Wawona Tunnel on Wawona Road. You should definitely stop here briefly in one of the parking lots that are available on both sides of the street to enjoy the view. From here you can look into the Yosemite Valley, see the southwest face of El Capitan on the left, the Half Dome at the end of the valley and the Bridalveil waterfall on the right. 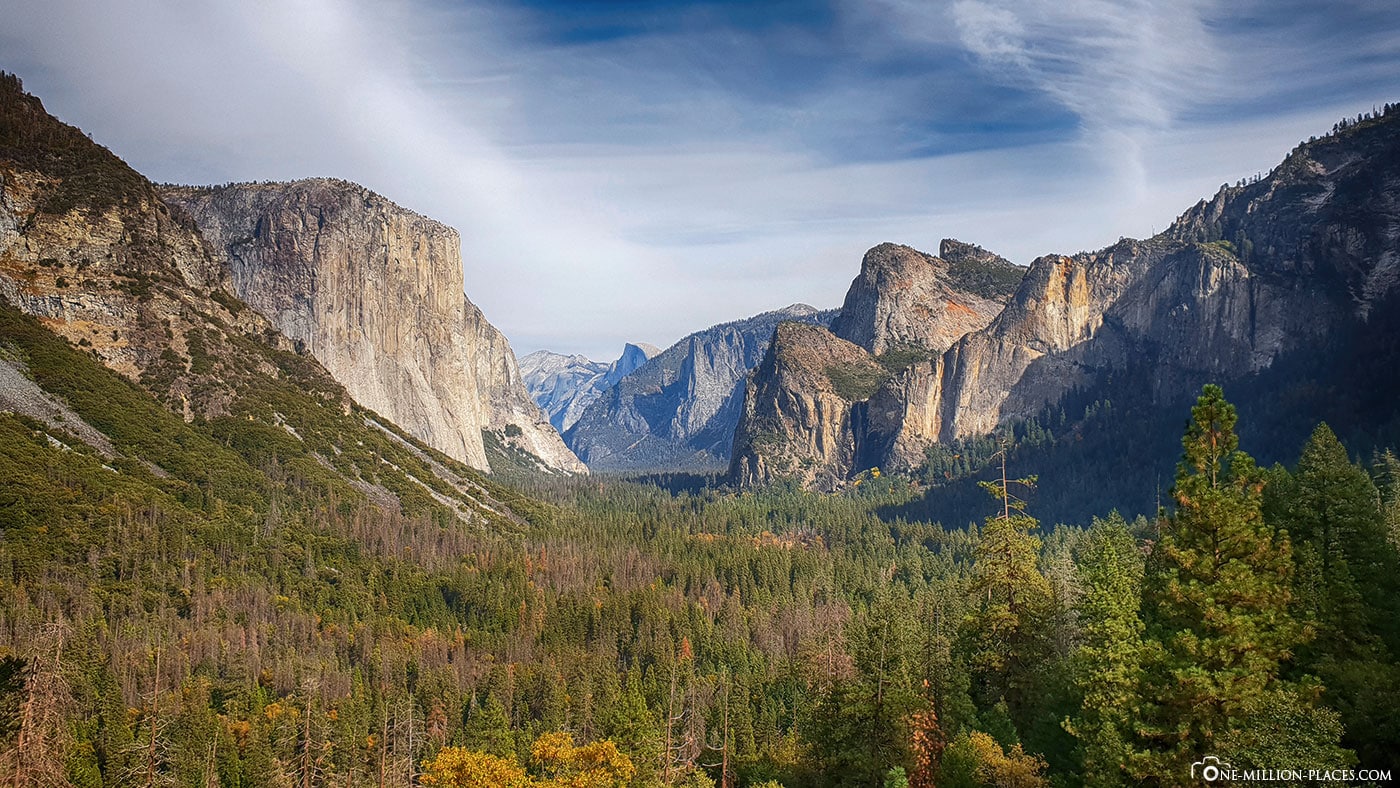 View from the viewpoint “Tunnel View”

Bridalveil Waterfall is one of the most famous waterfalls in the Yosemite Valley. The waterfall is 188 meters high and flows all year round.

From the parking lot it is only a short walk until you stand directly below the waterfall. Since it was a bit windy, the falling water was blown sideways and since the waterfall was not so water-rich, almost nothing arrived downstairs.

There are many more waterfalls in Yosemite Valley. The best known are probably the (Upper and Lower) Yosemite Falls, which unfortunately dried up when we visited here. If you want to experience the waterfalls of Yosemite National Park in its most beautiful splendour, you should definitely come here in spring, when the waterfalls lead a lot of water due to the snowmelt.

The Yosemite Valley is located in the middle of the high granite peaks and is considered the heart of Yosemite National Park. Although the 12-kilometre-long valley represents only about 1 of the total area of Yosemite National Park, it is the most visited “attraction” in the entire national park. Especially in the summer months it can get really crowded here. In 2011, 21,000 visitors came to the park on a warm June day, setting the previous day’s record. For a visit to the park, one should rather switch to spring and autumn, where there is much less going on.

Most visitors pass the valley from the streets in the west and pass the entrance to Tunnel View, from where you have a magnificent view of the main attractions of the valley. From the valley you can see many of the highlights of Yosemite National Park: be it the view of the Half Dome or El Capitan, the Yosemite Falls or the Merced River, which winds through the valley. Many use the Yosemite Valley as a starting point for hikes in the hinterland but also at higher altitudes, such as Glacier Point.

The Yosemite Valley was added to the list of California Historical Landmarks and Historic Districts in the United States.

Yosemite National Park: What to know & the Tioga Pass

A hike to the Vernal Fall

There are countless hiking trails departing from Yosemite Valley. You can choose between short hiking routes, but also really long, multi-day hikes.

Since we didn’t have that much time in the late afternoon, we decided to hike to Vernal Fall, which is at the beginning of the 73 kilometer Long High Sierra Loop Trail. To the starting point of the hike we went with the free Yosemite Valley Shuttle, which departs at intervals of 20 to 30 minutes various stops within the Valley. So you can confidently leave your car in one of the many parking lots and then take the bus, which is in operation every day from 7 a.m. to 10 p.m. every day.

At Yosemite Valley Shuttle stop 16, the Mist Trailbegins, leading to Vernal Waterfall. The path runs mostly shady, i.e. in the protection of the forest. After only a few meters, the path begins to become steeper, which goes quite nicely into the legs. We cross the Vernal Fall Bridge, under which the unfortunately dried-up Merced River flows through. After another route we arrived at the foot of the 96.6 meter high Vernal Fall, which unfortunately does not carry much water at this time of year.

After taking a few photos and once briefly sneaking through, we made our way back, because we didn’t have so much time until the sun goes down.

After our hike to Vernal Fall we got straight into the car and drove again through the Yosemite Valley to take the western exit towards our hotel. At the exit we were offered a great sight, for which we stopped again: The setting sun bathed the Half Dome in a pink-orange light. Just WOW and a great conclusion to our visit to Yosemite National Park! 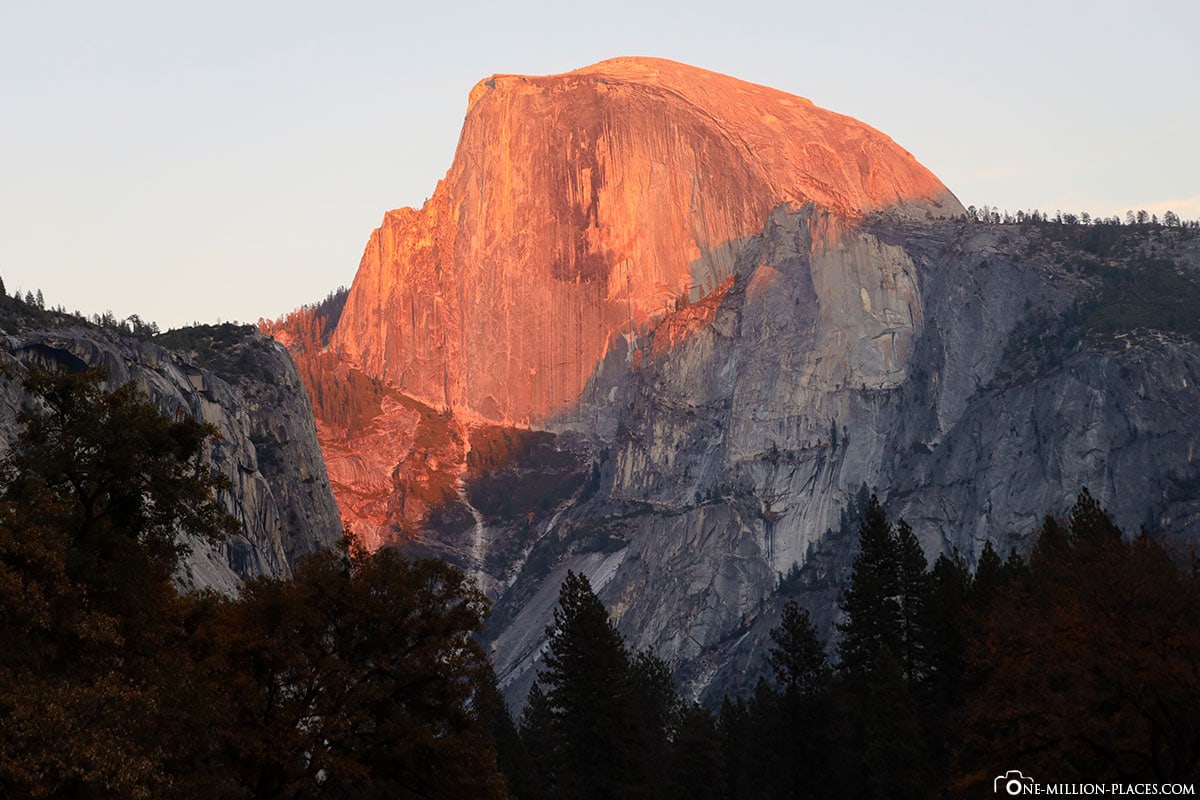 Sunset at Half Dome