After doing a Whale Watching Tour in Monterey Bay this morning and then visiting the Monterey Bay Aquarium, we used the rest of the day to drive off the 17-Mile Drive.

The 17-Mile Drive is located about 200 kilometers south of San Francisco between the beautiful coastal towns of Monterey and Carmel-by-the-Sea in California.

The privately managed road, which winds between Pacific Grove and Pebble Beach, runs for a total of 27 kilometers (17 miles) along the rugged Pacific coast, past famous golf courses and billionaire mansions, and through wind-deformed cypress forests. Already in 1881, the first horse-drawn carriages rolled through the green hills for a picnic on the beach of Pebble Beach, where the first golf club (Pebble Beach Golf Links) was opened in 1919.

The 17-Mile Drive has five driveways:

The road toll of this panoramic road costs USD 10.25 per vehicle (as of November 2018) and must be paid in cash at one of the access roads. Admission is free for residents and their guests, as well as for cyclists and pedestrians. Motorcycles are not allowed on the road. By the way, the entrance fee will be charged if you buy or eat in the municipality just over 35 USD.

The opening hours for tourists are generally from sunrise to sunset.

There are 3 hotels located right within the gated community of Pebble Beach on the Monterey Peninsula: The Lodge at Pebble Beach, The Inn at Spanish Bay and The Casa Palmero at Pebble Beach. These are all luxurious 5-star hotels with correspondingly very high prices. A room usually costs between 500 and 800 euros per night! Therefore, it is definitely recommended to take a hotel in Monterey or Carmel-by-the-Sea.

A map with all driveways, attractions, parking lots, toilets, picnic areas, hotels and golf courses can be downloaded here. Also on Google Maps there is an interactive map with all the important points. 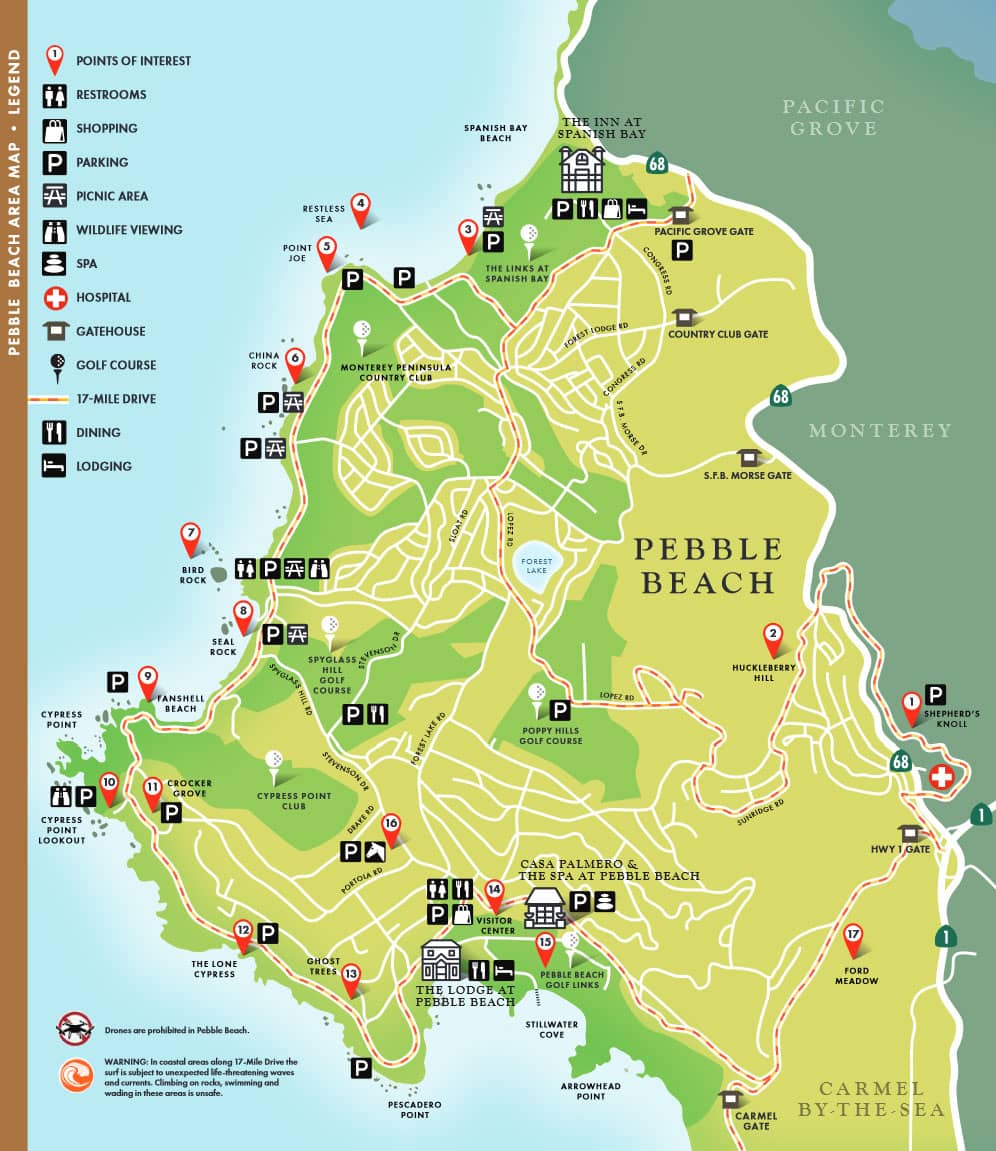 A map of 17-Mile Drive in California (USA)

The most beautiful photo spots on the 17-Mile Drive

In total, it took us about 2 hours this afternoon to drive the most important photo spots on 17-Mile Drive. In the small map you get at the entrance, 17 points worth seeing are painted. Almost every point there is also a parking lot, so you can always make a good stop. Our most beautiful photo spots on the 17-Mile Drive were the following:

Spanish explorers set up camp here in 1769 while searching for Monterey Bay. This event gave the beach the name ‘Spanish Bay Beach’ in hindsight. We particularly liked the countless stone turrets on the beach that people left behind here and which yield very nice photo motifs.

This viewpoint is called ‘The Restless Sea’ because it is one of the most turbulent stretches of coastline in Pebble Beach. Due to the rocks, the waves here constantly collide and make the sea a little restless.

‘Point Joe’ mistaken former sailors as the entrance to Monterey Bay, making it a place where there are many shipwrecks. In the early 20th century, a man named Joe lived in a driftwood hut, selling trinkets to tourists and caring for goats. It is not yet clear whether Joe was named after the viewpoint or the vantage point after Joe 😉

Today’s ‘China Rock’ was the site of a small Chinese fishing village at the end of the 19th century. 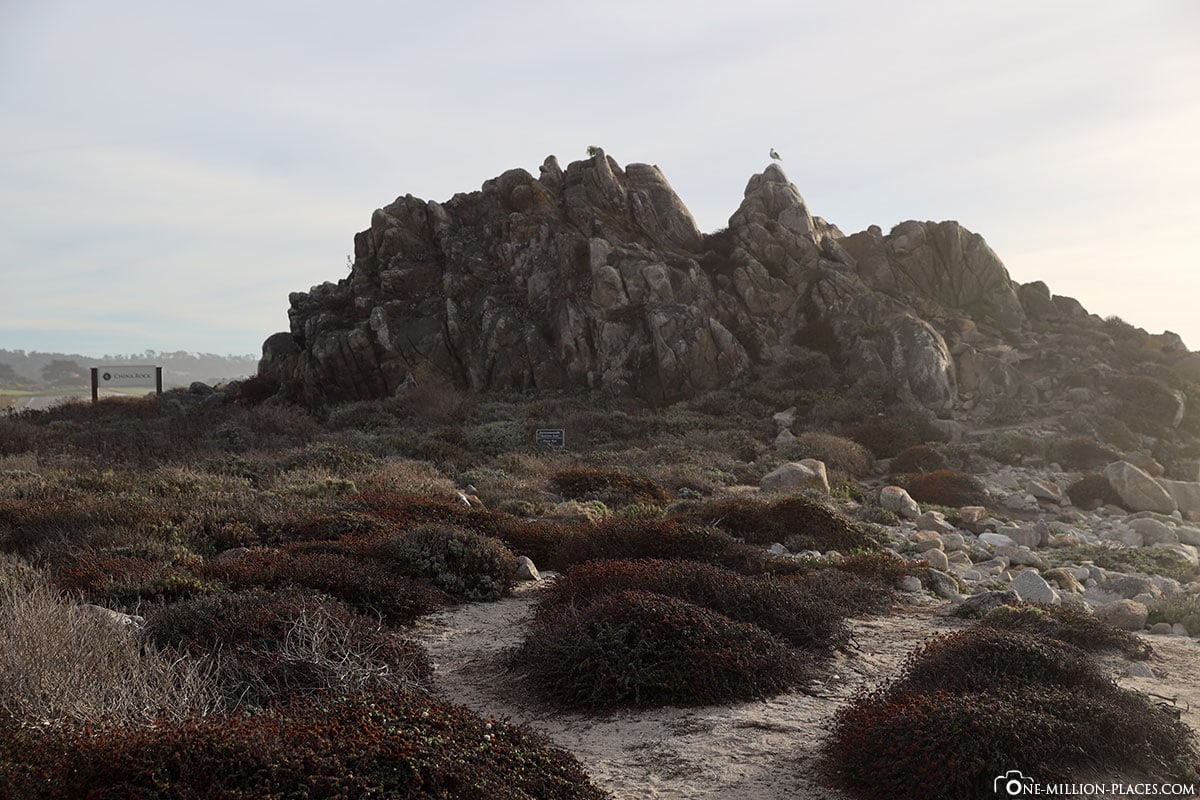 From the parking lot you can already see the rock just off the coast, where there are numerous seagulls, pelicans and sea lions. It is best to secure one of the seven observation telescopes in order to get a good view of the offshore island and to be able to view the animals very close.

Crocker Grove is home to the largest and oldest Monterey cypress trees. The sightseeing point is named after Charles Crocker, a railway magnate who was responsible for the construction of the luxurious Del Monte hotel in Monterey. Pebble Beach is home to one of only two native Monterey cypress forests in the world. The other is opposite Carmel Bay at Point Lobos State Park.

At The Cypress Point Lookout we had a beautiful view of the coastal beach section in front of us. And what luck: A sea lion just rested on the beach after coming out of the water.

The highlight and probably the most photographed attraction on the 17-Mile Drive is the Lone Cypress. For more than 250 years, the world-famous cypress has been standing on a rocky pedestal overlooking the Pacific Ocean and defying the elements here. 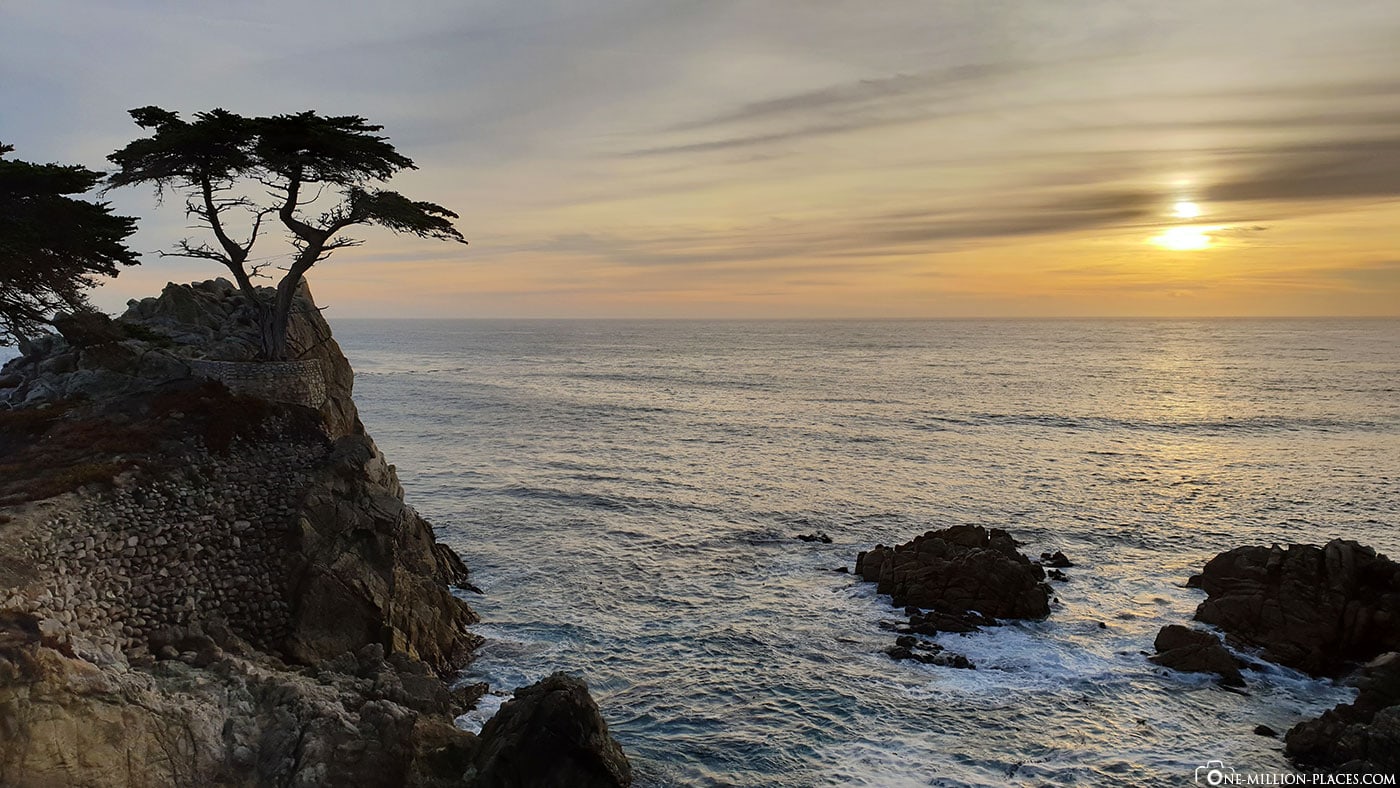 At Pescadero Point there is a small circular path where you can see some sun-bleached cypress ghost trees. In addition, ‘Ghost Trees’ is also the name of a well-known surf spot – in good weather conditions there are even waves up to 15 meters high to marvel at.

In general, the 17-Mile Drive is a beautiful coastal road, as you can find almost everywhere in California (also free). Of course, everything here is particularly beautifully laid out and maintained, there are great houses, golf courses and some interesting photo spots. But sometimes we thought, here a “point of interest” was created for nothing special 🙂 If you only rattle off the most important photo stops, you can see everything important on the circuit in just over 1.5 hours. If you take a little more time (e.g. for a picnic on the beach of the Spanish Bay or for a visit to the Visitor Center) you should plan 2 to 3 hours.

We liked the ride along the panoramic road, but no better or worse than any other coastal road. But if you are in the area anyway, you should not miss a visit.