The history of the Golden Gate Bridge

Before the Golden Gate Bridge existed, it was only possible to cross San Francisco Bay by boat. The first ferry service was in 1820. 100 years later, the Golden Gate Ferry Company was the largest ferry company in the world. The ferry crossing from San Francisco Ferry Terminal to Sausalito took about 27 minutes. At the time, there were already some plans to build a bridge over the Bay, but many experts saw this project as critical due to the strong tides and currents, the deep water, the strong winds and the fog. There were also concerns about whether and how this project could be financed.

In 1921, the engineer Joseph Strauss submitted plans for a combined boom and suspension bridge. However, due to their appearance and funding problems, these plans were more likely to be rejected. The pressure for bridge construction increased in the following years as the ferries reached their capacity limits. Due to advanced theories and advances in steel production, Strauss changed his plans for the bridge between 1925 and 1929 and designed a pure suspension bridge with a span of 1,280 meters.

The construction of the Golden Gate Bridge was a huge challenge. The bridge broke many records at the time:it had the highest pillars with 227 meters, the longest (2,332 meters) and thickest (92 centimeters) cable strands and the largest underwater foundations.

The construction of the Golden Gate Bridge

The bridge color is officially called “International Orange” and was chosen because it fits into the natural environment and improves the visibility of the bridge in the fog. The bridge construction project was completed on 19 April 1937 and the official bridge opening ceremoniesbegan on 27 May 1937, which lasted a week. The day before the car was registered, 200,000 people crossed the bridge on foot or on roller skates. The next day, in Washington, D.C., President Roosevelt pressed a button that signaled the official start of vehicle traffic across the bridge at noon. As part of the celebrations for the 50th anniversary, the bridge was closed again to car traffic in May 1987. Between 750,000 and 1,000,000 people came to the festivities that day and caused the bridge to be overcrowded.

The Golden Gate Bridge is an architectural work: construction began in 1933, completed in 1937, a total length of 2,737 meters and a height of 227 meters. In order to grasp the gigantic size of the bridge, one must stand in its immediate vicinity and let it act on itself.

Here are some interesting figures about the Golden Gate Bridge: 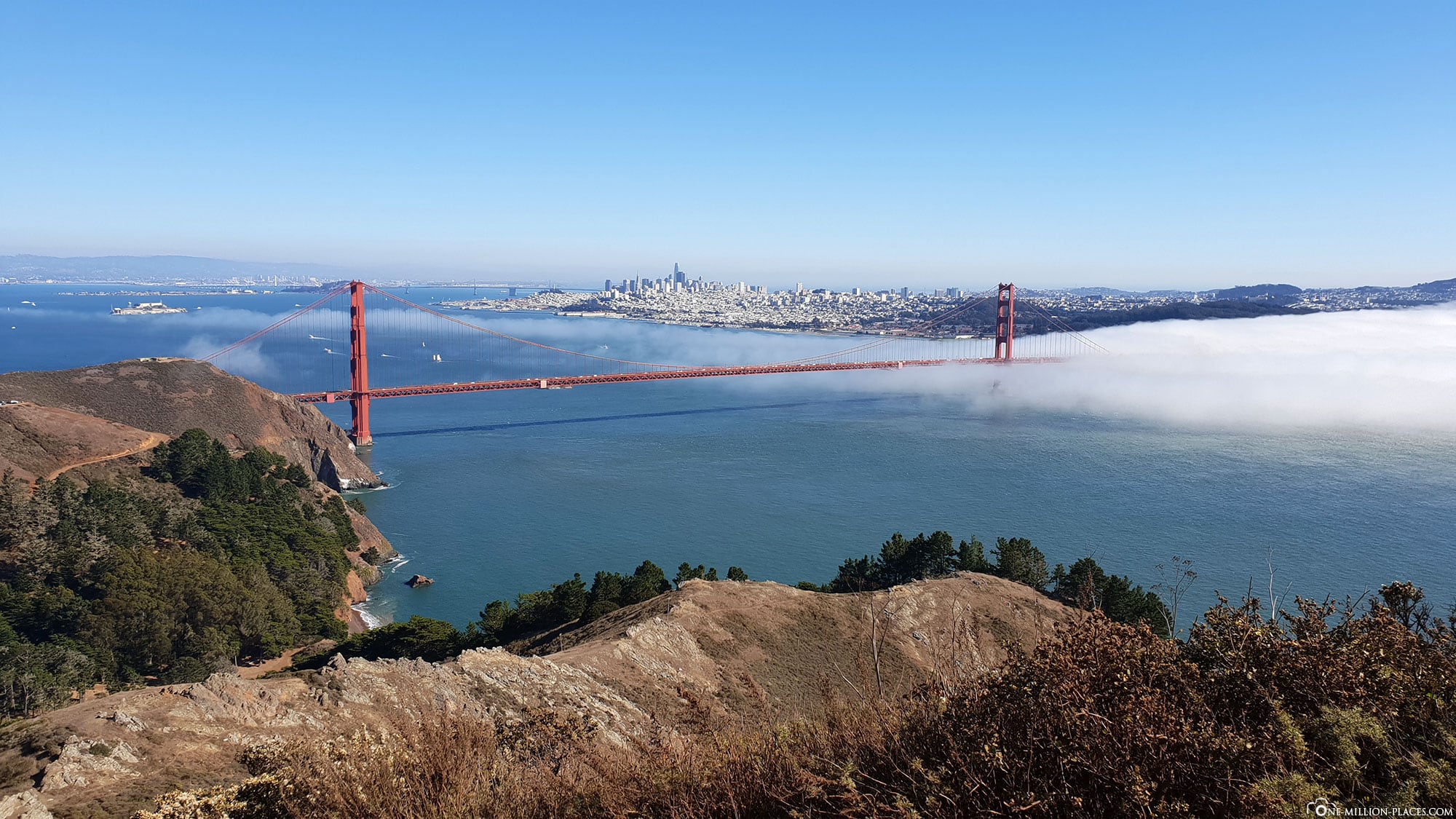 How much does a trip across the Golden Gate Bridge cost?

After the bridge was opened in 1937, 50 cents of toll was paid per car, which was levied both inand and out of the city. In the following years, the toll fell to 25 cents per car. In 1968, it was decided to charge only tolls for traffic inland (i.e. from north to south) and reduced the tolls to 50 cents. In 2002, tolls were processed through the FasTrak electronic toll system to ensure faster and easier passages. You could still pay with cash , but this was slightly more expensive than via the electronic system. In the years that followed, there were repeated increases in tolls. Currently (as of November 2018) the price is 8 US Dollars for normal cars. If you pay via FasTrak, the toll costs only 7 US dollars.

The toll is only due for one direction (inward), i.e. from north to south. Those who drive the Golden Gate Bridge towards Sausalitos do not have to pay tolls.

Cash payments are no longer possible since March 2013! There are several alternative ways to pay his toll. It’s important to think BEFORE how you want to pay for the Toll:

(1) FasTrak: Simply open a FasTrak account by phone or online or buy a FasTrak badge from Safeway, Costco or Walgreens.
(2) Pay-by-Plate: You have to open a license plate account for this. Each time the bridge is paid, the credit card will be charged the toll.
(3) One-off payments are possible online at bayareafastrack.org up to 30 days before or up to 48 hours after crossing the bridge.
(4) Invoice: If one does not use any of the first three options, a toll bill will be sent to the address of the vehicle owner without additional charges.
(5) Car rental company: The easiest way is to settle with the car rental company. When renting on site, it is said that you want to use one of the paid Bay bridges. This is usually not a problem for the distributors in San Francisco. If you pick up your car in Los Angeles or Las Vegas, for example, this should be clarified additionally.

Here we found a good map showing the other bridges with tolls in the San Francisco area: Google Maps

The best photo spots for the Golden Gate Bridge

The Golden Gate Bridge can be photographed from all sides and it always looks great 🙂 Depending on the position of the sun, you should opt for a photo spot east or west of the bridge. The frequent fog can also play an important role in the choice of photo spot. From our experience, the southern part is often obscured in the fog, which is why one can usually take the better pictures from the northern photo spots. But at the end of the day, it varies from day to day and month to month. Nevertheless, we would like to show you at this point the photos spots of the Golden Gate Bridge and the associated perspectives.

From the Golden Gate Bridge Welcome Center you can walk the Battery Trail towards Marine Drive/Crissy Field. Here you also have a beautiful view of the bridge from the beach and you can also hear the sound of the sea. 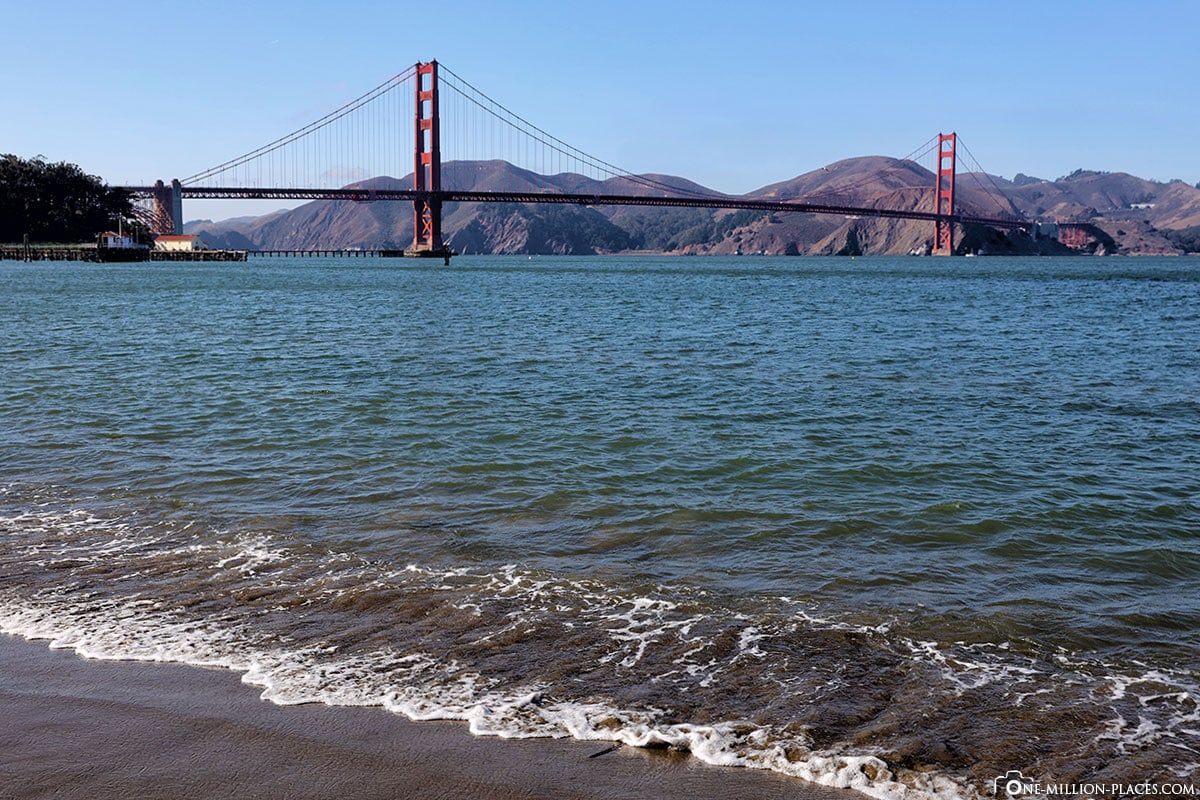 View from the beach of Crissy Field

From the two viewpoints Baker Beach & Lands End Lookout you can see the Golden Gate Bridge from the southwest. We would have liked to stop here once, but when we were here by car, the southern part of the bridge was unfortunately completely covered in fog. 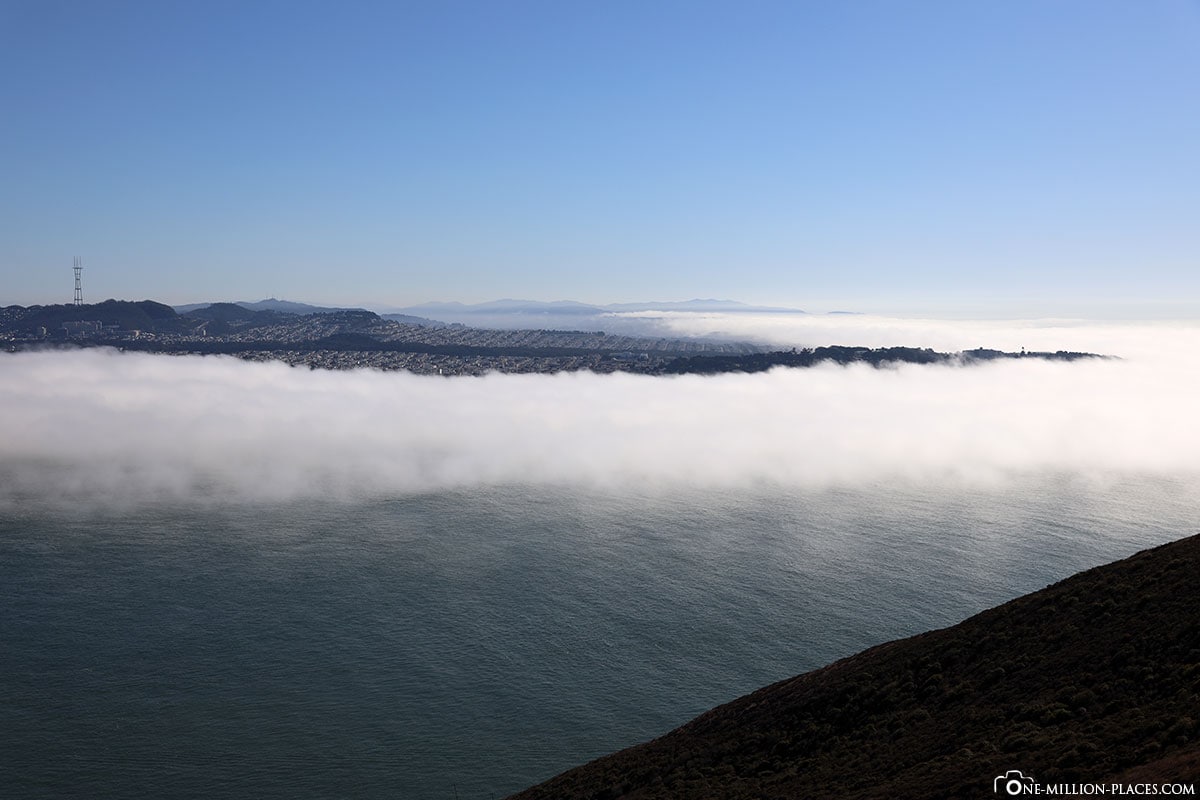 The Bay and Lands End in the fog

Vista Point at H. Dana Bower Rest Area also offers beautiful views of the San Francisco bridge and skyline. Parking is free here. Most tour operators and also the Hop On Hop Off buses stop at this vantage point – so it is usually very crowded here.

We all enjoyed the views from the viewpoints along Conzelman Road. Perhaps it was also because the Golden Gate Bridge was half covered in fog when we were on this side of the bridge. This already had something magical & mystical and has resulted in a wonderful photo motif 🙂

From Fisherman’s Wharf you can take advantage of one of the Bay Tours, which are run by companies such as the Red & White Fleet or the Blue & Gold Fleet. During the tour, you can sail through the Bay, along the San Francisco coast, and experience the Golden Gate Bridge up close from the water – and from different angles. Also on the tour to Alcatraz you have a great view of the bridge. 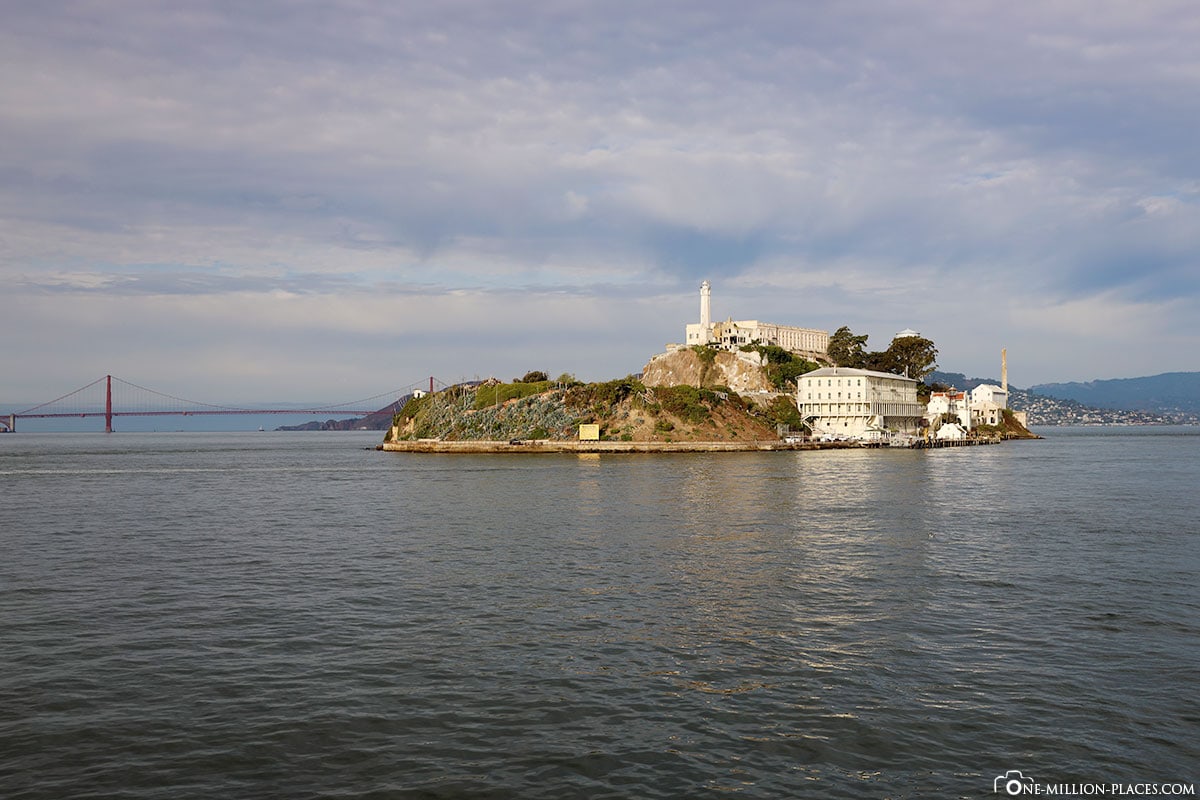 A walk across the bridge

Since we explored San Francisco by Big Bus, we also had the opportunity to take the bus to the other side of the bay to the Golden Gate Bridge (North) Vista Point, get off there and walk back over the bridge. And it was a really great experience. You can’t really estimate the height and size of the bridge from a distance if you have not walked over it at least once 🙂

The fact that the bridge is very popular with pedestrians and cyclists was quickly seen. Because we were constantly met by cyclists and pedestrians. Not surprisingly, because in the city there are countless bike rentals, which offer here different self-driving tours.

The main road is located on the east side of the bridge and is open to pedestrians and bicycles on weekdays from 5 am to 3.30 pm and only for the remaining hours of the day (until 6.30 pm or 9 pm during summer time). On weekends, the east side is reserved for pedestrians (5am to 6.30pm or 9pm during summer time) and is open to cyclists in the eveningand night only when it is closed to pedestrians. The western walkway is open only to cyclists and only at times when they are not allowed on the eastern sidewalk. It is best to walk over the bridge in the morning, at noon or in the early afternoon, as you have a great view of the Bay including Alcatraz Island and the San Francisco skyline on the east side. The exact “opening hours” can be found on the official website.

What we noticed during our walk on the bridge are the so-called Road Zippers or zippered vehicles, which have been available on the Golden Gate Bridge since January 2015. This invention is totally ingenious, because the zippered vehicles move the middle barrier between the lanes twice a day to adapt the road to traffic conditions. With more than 120,000 vehicles passing through the bridge every day, this is also urgently needed. In the morning rush hour on weekdays, most traffic flows into the city, turning a 3-3 lane distribution into a 4-6 lane distribution, meaning four of the six lanes run into the city and only two out of the city. Outside this time, traffic runs in both directions on three lanes.

In the following video from Wikipedia you can see how the system works exactly: