After doing a Whale Watching Tour in Monterey Bay this morning, we wanted to see the famous Monterey Bay Aquarium in The Cannery Row of Monterey in the afternoon.

Cannery Row in Monterey is a waterfront street where a number of canned sardine factories were in operation until 1973.

Most of the former settlers in Monterey specialized in traditional fishing, especially the catch of sardines. As these were found here in large numbers, Monterey was nicknamed ‘Sardine Capital of the World’ over time. The first canned fish factory was built in 1895 by Frank E. Booth on Cannery Row. More factories followed as production and sales increased. The Pacific sardines in tin cans in oil were very popular due to the cheap raw materials, the good storage properties and the high nutritional value. After the Second World War, sardine fishing collapsed due to overfishing, and a severe crisis ensued – both for Cannery Row and for the workers.

Two books by John Steinbeck(The Road of The Oil Sardines & Wonniger Thursday),which deal with the former life on Cannery Row, made the road a popular tourist magnet and still is today. Walking along the street, you can still see many of the old canning factories that have been given a new purpose today (souvenir shops, restaurants, etc.).

The aquarium in Monterey is considered one of the largest show aquariums in the world. More than 200 pools offer the 1.8 million visitors a year an insight into the local and global underwater world.

Things to know about the aquarium

On the site of what is now the Monterey Bay Aquarium, Knut Hovden opened his canning factory ,The Pacific Fish Company, the first large canning factory on Cannery Row, in 1916. After sardine fishing began to collapse, Hovden’s factory was closed in 1973. From 1977, plans were developed for an aquarium that showcases the unique marine diversity of Monterey Bay. In 1978, a group of marine scientists, residents, and members of the David and Lucile Packard Foundation founded the Monterey Bay Aquarium Foundation. The initial construction costs for the aquarium, which ultimately amounted to 55 million dollars, were financed by a one-time personal gift from David Packard (co-founder of the technology company Hewlett-Packard). The Monterey Bay Aquarium opened its doors on October 20, 1984 and presents in today’s premises more than 35,000 living creatures and over 550 different species of marine animals.

The Monterey Bay Aquarium is open every day from 10 a.m. to 5 p.m.; the only exception is 25 December (Christmas). A ticket for adults costs a whopping 49.95 USD. But you also get a lot of offers for that.

A map of the aquarium

A map of the aquarium can be downloaded here. 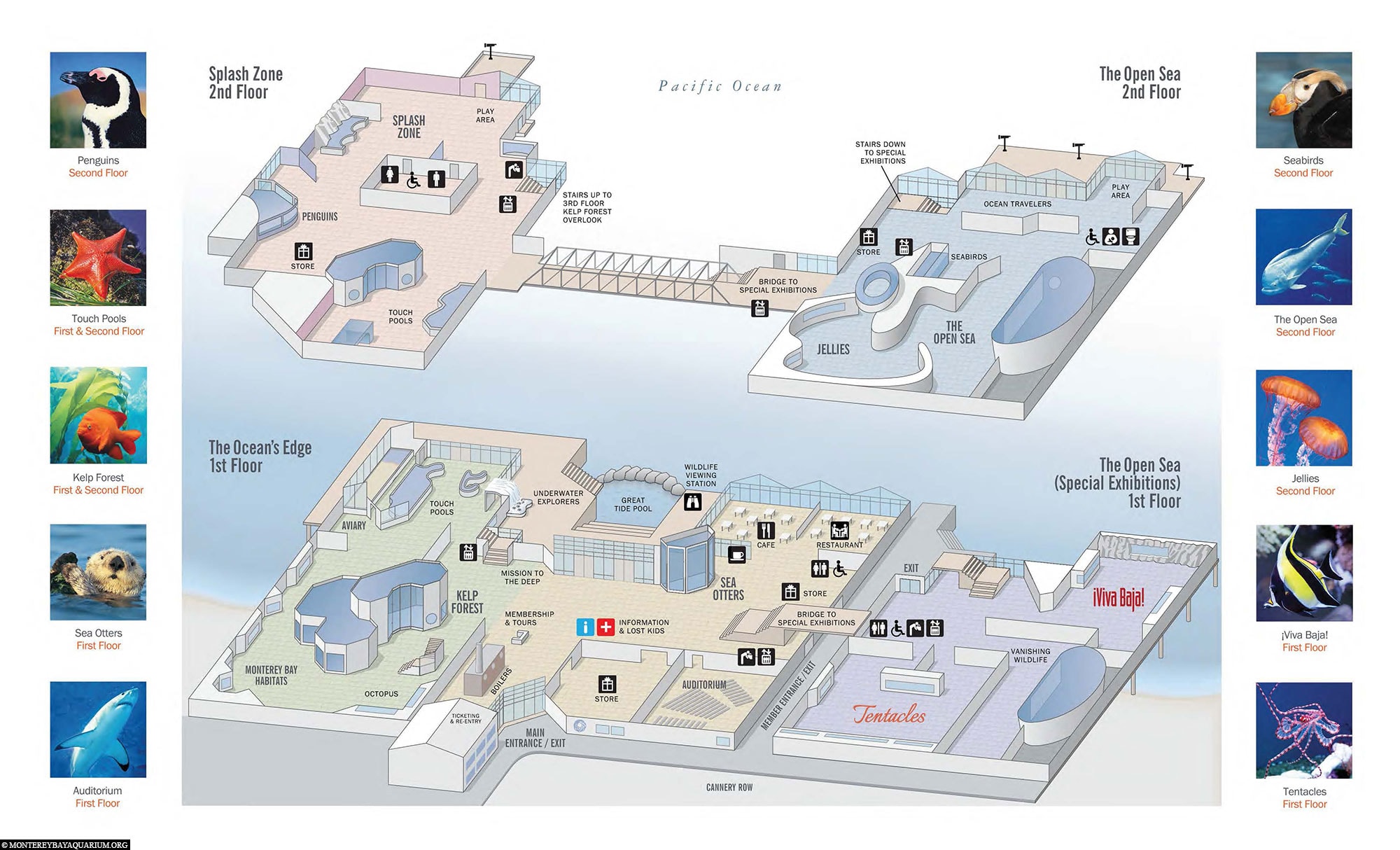 A map of Monterey Bay Aquarium

Our tour of the aquarium

It took us about 3 hours to tour the Monterey Bay Aquarium. We are sure that you can also spend a whole day here, because there is enough to see here 🙂

The Tang Forest (Kelp Forest) is an underwater forestwhere you can see sardines, leopard sharks, sea wolves and a variety of other fish and is modelled on the underwater world of Monterey Bay. Twice a day there is a feeding here, which is carried out by a diving employee. The seaweed plants in the basin grow an average of 10 centimetres per day, so they must be untangled and cut back quite openly.

We particularly liked the penguins and the tropical fish. Since we like to dive so incredibly, we are always very happy when we can observe the little colorful fish, whether Nemos, Doctorfish, Pusherfish or Suitcase Fish.

We visited the penguins during their feeding season. And that was really entertaining: the penguins have been lying down, have swam wildly, tried to get one of the feeding fish or just waded through the area. All penguins here are part of a ‘Species Survival Plan’ for endangered African penguins. The program, managed by the Association of Zoos and Aquariums (AZA), preserves the genetic health of more than 800 African penguins in the 50 AZA-accredited zoos and aquariums.

In the Monterey Bay Aquarium there are various touch tools,where – as the name suggests – you can simply hold your fingers in the water and touch underwater creatures and also many native plants. This is very impressive and sometimes feels really strange 🙂 Small crethes run with their shell on the hand, you can touch starfish or even feel how kelp feels.

The jellyfish in the aquarium

A special highlight in the aquarium are definitely also the many jellyfishthat you can find here. We could have been standing here for hours in front of the pools and watching the animals. It is so fascinating how, for example, the sea nettles or compass springs move through the aquarium – close to each other – without the meter-long tentacle getting caught.

The large basin of the open sea

With a capacity of 4 million litres of water, the Open Sea is the largest basin in the entire aquarium. Here you will find hammerhead sharks, passing tuna, huge schools of sardines, stingrays or sluggish sea turtles floating past the glass pane. We sat down here for a while and took a closer look at the action.

Overall, it was a very nice day in Monterey 🙂