The most beautiful city in Tenerife is from our point of view San Cristobal de La Laguna, which is also called La Laguna for short. In the old city, which was founded back in 1496 and is now a UNESCO World Heritage Site, there are many churches, city villas and historic buildings to discover. The visit can be ideally combined with a hike in the Rural de Anaga Park, a cloud forest of laurel trees in the up to 1,024-meter-high Angaga Mountains.

The city of La Laguna, which today has about 157,000 inhabitants, can look back on more than 520 years of history. The founding of the city in 1496 was preceded by a very precise and detailed urban planning. They wanted to follow the European trend by making the layout of the city chessboard-like, obliging citizens to use good building materials and to build the houses in a line of flight. This architectural style quickly found favour and served as a model for many other colonial cities, especially in Latin America. Relatively quickly after the founding of the city, the former capital of Tenerife developed into the center of political, economic and cultural power. That changed in the 18th and 19th century with the further development of the new capital Santa Cruz, so that La Laguna lost more and more importance.

In 1999, UNESCO took the unique history of the city as an opportunity to declare La Laguna a World Heritage Site. And for several reasons:

(1) La Laguna is the first colonial city without city walls.
(2) Many historic buildings are still very well preserved today, including about 600 buildings of the Mudejar Muslims.
(3) The city is divided into a naturally grown, original upper town as well as a lower old town, which was later used by many other cities as a model for a completely planned city. 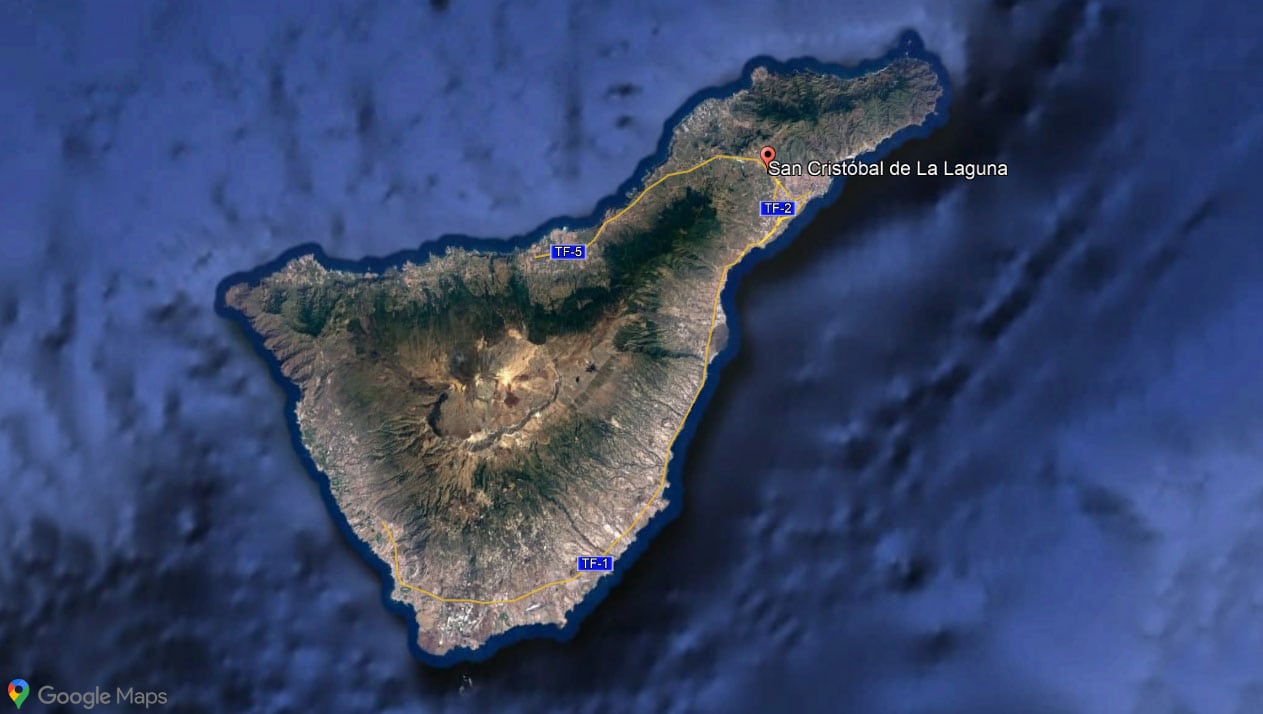 The location of San Cristóbal de La Laguna in Tenerife

The most famous sights

We parked our rental car in the underground car park “Parking – La Trinidad”; the perfect base from which to reach the main attractions on foot.

Our first stop was the Plaza del Adelantado which was once the most important square in the city, so that the most important administrative buildings were built around the square. Until the 19th century, public festivals as well as processions and bullfights took place on the square. Today, a marble fountain adorns the center of the square, all around there are trees and benches to linger.

From the Plaza del Adelantado we walked past the Santa Catalina Monastery to get to the historic center. Here we just let ourselves drift and strolled through the alleys, past historic buildings, cafes, restaurants and small shops.

Our tip: It is worth a detour to the Casa de los Capitanes Generales. The building, built between 1624 and 1631, now houses the Town Hall of San Cristóbal de La Laguna, the Tourist Information Office and the Mayor’s Office. The highlight is the courtyard, which has been converted from all sides and is beautifully landscaped.

In the old town there are two churches very worth seeing. The large cathedral Nuestra Señora de los Remedios (“Catedral of La Laguna”) we liked very much from the outside. However, we were not in it, as you have to pay an entrance fee of 5 EUR. About 400 meters further on is the Iglesia de la Concepcion, which is the oldest church in Tenerife. Its bell tower is visible from afar; the church building is relatively inconspicuous right next to it.

When we stroll through cities, we always keep our eyes open for street art because we just really like it. And lo and behold, also in La Laguna we were able to discover a few murals in a street.

Just a few minutes’ drive from La Laguna, the Anaga Landscape Park is located as part of the Anaga mountain range. Here we were awaited by beautiful peaks, deep valleys & gorges and fantastic views.

The approximately 20 km long and 5-10 km wide Anaga mountain massif is located in the northeast of Tenerife and was formed about 7 to 9 million years ago by volcanic activity. With a height of 1,024 meters, the highest point is the Cruz de Taborno in the west of the mountains.

In 1987, the Parque Rural de Anaga was founded in this mountain massif, which was placed under special protection in 1994. Since 2015, the area has also been declared a biosphere reserve by UNESCO. The Rural de Anaga Park covers an area of about 14,500 hectares, a significant part of the island in the extreme northeast of Tenerife.

The weather is particularly characteristic when you drive along the ridge road lined with laurel trees on top: rain and fog are responsible for the fact that the wettest region of the island is located here. And we were able to experience that exactly the same way. Hardly any view on the road and from the viewpoints, such as the Pico del Inglés, not to mention. Here you had absolutely no view 😉 But this weather also had something mystical about it and fit perfectly to the overgrown laurel forests.

Our tip: A great photo spot is the “Camino viejo al Pico del Inglés“, a passage covered with laurel trees on both sides.

Hiking trails in the Anaga Mountains

The Anaga Mountains are one of the most important recreational areas and are known above all for its numerous hiking trails. From the very well developed road, which leads over the ridge, numerous hiking trails and gravel roads branch off. Above it you can reach beautiful viewpoints and rock formations, such as the Roque de Anaga and the Roque Bermejo.

A good overview of different hiking routes can be found on the page of AllTrails.com 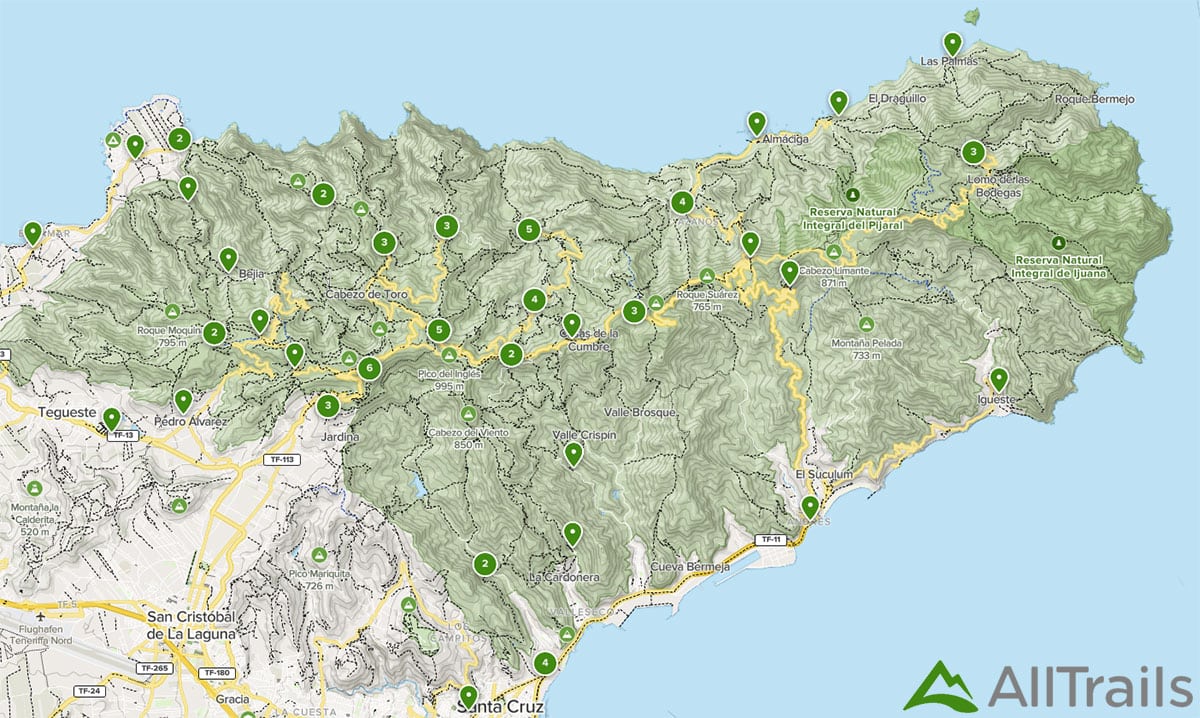 A map with all hiking trails in the Anaga Mountains