After 7 hours of flying time, we arrived at Newark Liberty International Airport in the early morning from Alaska at around 8 a.m. Luckily, we didn’t have to go through immigration to get out of the airport because we came from Anchorage and it was a domestic flight. Since our onward flight to Frankfurt did not continue until 6 p.m., we still had enough time to drive in for a short time to Manhattan. There was a new attraction with the Vessel, which we really wanted to see 🙂

What is the best way to get from Newark Airport to Manhattan?

To get to Manhattan from Newark Airport, of course, there are several options:

We chose public transportation – and thus the cheapest option – and first took the New Jersey Transit Bus #62 to the PATH stop Newark-Penn Station. This will cost just $1.60 per person. The money should be appropriate and the journey time is about 25 minutes.

At Newark-Penn Station, you can take the PATH subway ($2.75) in 25 minutes directly to the World Trade Center in Lower Manhattan. Unfortunately we had just missed the PATH, so we had to wait almost 30 minutes for the next train. On weekends, the PATH only runs every 20-30 minutes, during the week of course more often. If you change at Journal Square, you can also go to the stops along 6th Avenue: Christopher St. in Greenwich Village, 9th St., 14th St., 23rd St. and 33rd St. There is a plan of the PATH connections here. We wanted to go to the World Trade Center, so the red PATH line is actually perfect. However, it does not currently travel to Manhattan on weekends! We had seen this too late. To get to Manhattan, you have to get off at Exchange Place station and take the ferry (from Harborside Ferry to Brookfield Place) across the Hudson River(link in Google Maps). Free ferry tickets are available directly at Exchange Place station when you leave the building. Unfortunately, it took us almost 1.5 hours to travel from Newark Airport to Manhattan. But for this it was favorable ($4.35) and such a trip by ferry to Manhatten always offers great views 🙂

View of Manhattan from the Hudson River

The highlight of the huge transport hub is the main hall of the station, known as the Oculus,which opened on 3 March 2016. The white glass and steel structure with its two widely outstanding roofs is said to resemble a bird (phoenix or eagle) that will take off immediately. In the light-flooded station hall there are many shops and boutiques that invite you to stroll. At both ends of the hall there is an observation deck, from which we had a beautiful view into the hall.

On the site of the former twin towers of New York’s World Trade Center is now the9/11 Memorial which commemorates the victims of the terrorist attacks of September 11, 2001 and the 1993 world trade center bombing.

Exactly where the twin towers used to stand, there are now two large basinsin whose copper border the names of the 2,983 people who lost their lives in the terrorist attacks of 1993 and 2001 have been engraved. In the basins, the water falls 9 meters deep into a basement – making it the largest man-made waterfalls in the United States. During our visit to New York in 2015, we were also in the 9/11 Museum and went to the observation deck of the One World Trade Center.

A walk through SoHo & Greenich Village

From Ground Zero we walked north on foot because we still wanted to go to the High Line Park. On the way there we walked through the streets of the two neighborhoods SoHo (South of Houston Street) and Greenwich Village(directions in Google Maps).

SoHo is considered a trendy trendy district in Manhattan. Here you will find designer shops, chic boutiques and many art galleries; but also upscale restaurants and nightclubs as well as numerous street vendors during the day. Like SoHo, the popular Greenwich Village neighborhood is also an artist and trendy neighborhood with many cafes, bars, restaurants and theaters. Together with the district of Chelsea, it also forms a focal point as a lesbian and gay district.

The former High Line high-speed rail line was originally built for freight traffic in 1932, as rail traffic on the road led to many accidents. However, in the 1950s, the demand for rail connections through the factories declined, and in the 1960s, part of the line began to be demolished. Trains were still running here until the autumn of 1980. Afterwards, they thought about what to do with the route. The city had already received a demolition permit; however, this could be averted by a citizens’ initiative. The decision was made to build a public park, modelled on the promenade planée in Paris created in the early 1990s.

We had also visited the High Line in our previous visits to New York. But unfortunately always rather in late autumn or winter, where of course it is not so nice. In addition, there is always something new to discover here. After a construction phase from 2006 to 2019, the current High Line is a 2.33 kilometre long park, which is free of charge. We walked from the beginning of the facility, which is located on Gansevoort Street in the Meatpacking District, to the end on 34th Street. There was a lot going on on the route – partly because the weather was just perfect, and partly because it was Sunday and so, in addition to all the tourists, many New Yorkers were on their own.

Since the redesign of the facility, the right and left of the route has become a popular place for companies but also for high-quality living space.

The Vessel at Hudson Yards

At the end of the High Line Park, you reach Hudson Yards, a new neighborhood on the western edge of Manhattan that opened in 2019. The district has many residential and office towers, as well as shops, restaurants and a hotel.

The center of the district, however, is “The Vessel” – a walk-in sculpture with 154 stair elements, 2,500 steps and 80 viewing platforms! As a visitor, you can visit this new attraction every day between 10 a.m. and 9 p.m. – and completely free of charge. We actually walked up to the top once and let the construction work on us from all sides – really a very interesting and sometimes somewhat different sight in New York, which we really liked.

Tip: In order to avoid waiting times, it is best to get the free access tickets online here in advance. 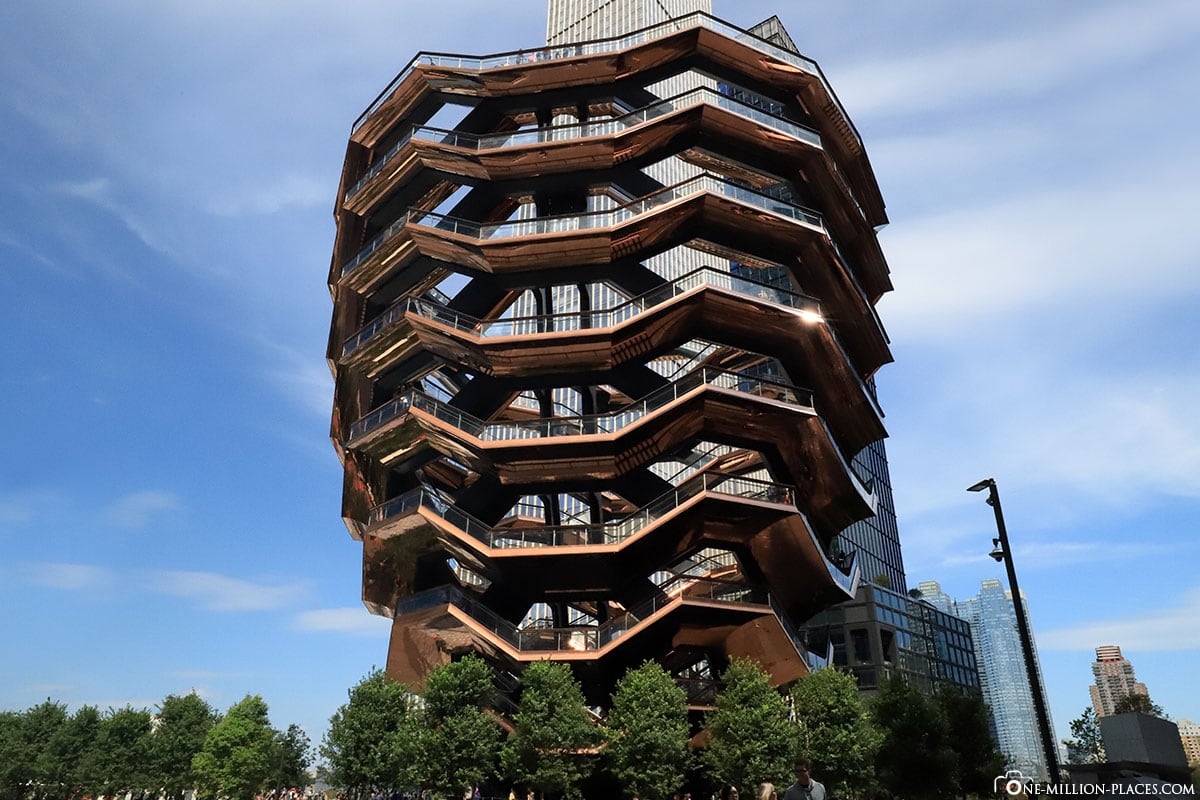 The Vessel in the Hudson Yards

Since we still had some time until our bus transfer to Newark, we didn’t want to miss a short detour to the famous Times Square. That’s just part of a visit to New York 🙂

Times Square is named after the New York Times and is located at the intersection of Broadway and 7th Avenue. Over 5 blocks (West 42nd Street to West 47th Street), it forms the center of the Manhattan theater district. About 40 theatres are located here, as well as many cafés, fast food shops, souvenir shops, cinemas, restaurants and many large shopping shops. Times Square is world-renowned for its numerous illuminated advertisements,which are attached to the (high) houses around the square and amaze you completely. The place is always very well visited – besides all the tourists there are always a lot of street artists.

Before we went to the airport, we got a delicious pizza at 2 Bros. Pizza near the Port Authority Bus Terminal. This is almost our “regular pizza shop” when we’re in New York 😉 From here, our shuttle bus Newark Airport Express went to the airport in the afternoon. We paid 18 USD per person for the trip and took about 40 minutes. During rush hour between 9 am and 11 pm, buses depart every 20 minutes towards the airport. You don’t need a reservation, you just go to one of the stops in Manhattan and then pay comfortably on the bus.

Our return flight to Frankfurt

Just in time at 6 p.m., our plane took off from Newark and landed in Frankfurt the next morning. On the plane we had enough time to review our great Alaska cruise with Princess Cruises and our nice stopover in New York. What a beautiful and eventful holiday! 🙂 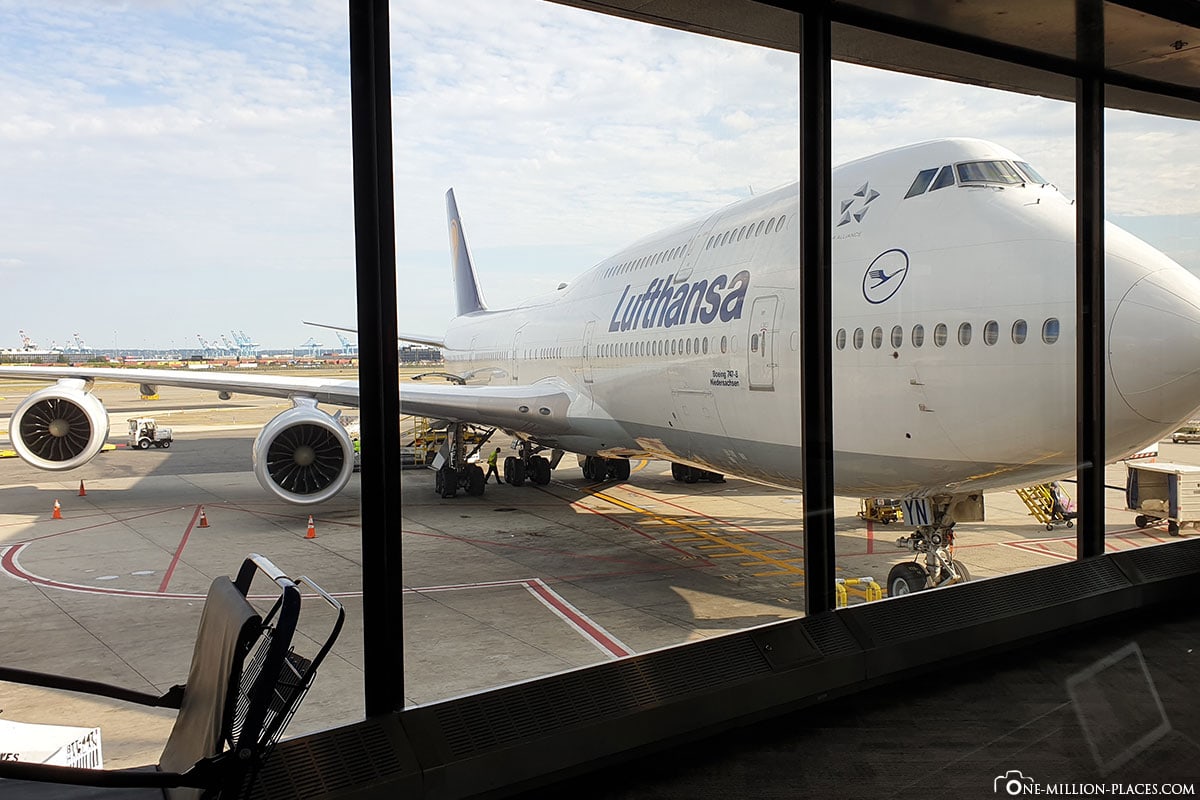 Our Lufthansa flight from Newark to Frankfurt