The fact that we wanted to dive on the Galapagos Islands at least once was clear to us from the outset. So two days ago we went to different diving schools in Puerto Ayora and informed ourselves about the different diving spots.

The Gordon Rocks east of Santa Cruz quickly crystallized for us as one of the diving highlights here on Galapagos, as you can often see groups of hammerhead sharks there. Diving at the Gordon Rocks is strictly limited,however, and so only a few providers are allowed to go there at all per day. Luckily, one of the diving schools in Puerto Ayora (Nauti Diving) offered a diving trip there for today and there were still 4 places available. So we didn’t hesitate for long and secured 2 places of it.

Since there may be strong currents at the Gordon Rocks (this spot is nicknamed “La lavadora – The Washing Machine”), the dive trip is only designed for advanced divers. Since we haven’t done as many dives with currently 15 dives, we have booked a private Divemaster, which only goes under water with both of us. At 8 o’clock the group of 12 people met in front of the diving school. Together we went first with taxis to the northern Canal Itabaca, from where our sailing ship “Nautilus” departed.

The boat trip to the Gordon Rocks

Arrived at the harbour we went first to our sailing-diving ship “Nautilus”. The boat trip to the Gordon Rocks took about 45 minutes.

In the meantime, we received a detailed briefing and then finished our equipment.

Two dives at The Gordon Rocks

The two of us went with our Divemaster in an extra inflatable boat to the first diving spot and then we finally went under water. Unfortunately, the visibility this morning was not very good and the water was not very clear. Nevertheless, we have suddenly seen a group of hammerhead sharks passing over us. Incredibly.

After 45 minutes we went back up and back to the ship. A short time later, the other (experienced) divers of the other group came back, but they were not lucky during their dive and did not see any sharks at all. On board we relaxed for over an hour before we got ready for the second dive. And here, too, we have seen a few hammerhead sharks, galapagos sharks, rays, turtles and, in the end, even moonfish. The other group told us that they hadn’t seen anything again. So we were really lucky and a good Divemaster. Because he knew that you could see the most at this dive spot at a depth of about 12 meters and the other group was over 20 meters deep all the time.

Video of diving at The Gordon Rocks

We also saw whitetip reef sharks, turtles, moraines, barracudas and many fish. Here is the underwater world of the Gordon’s Rocks as a small video:

During the drive-back there was a delicious lunch on board. 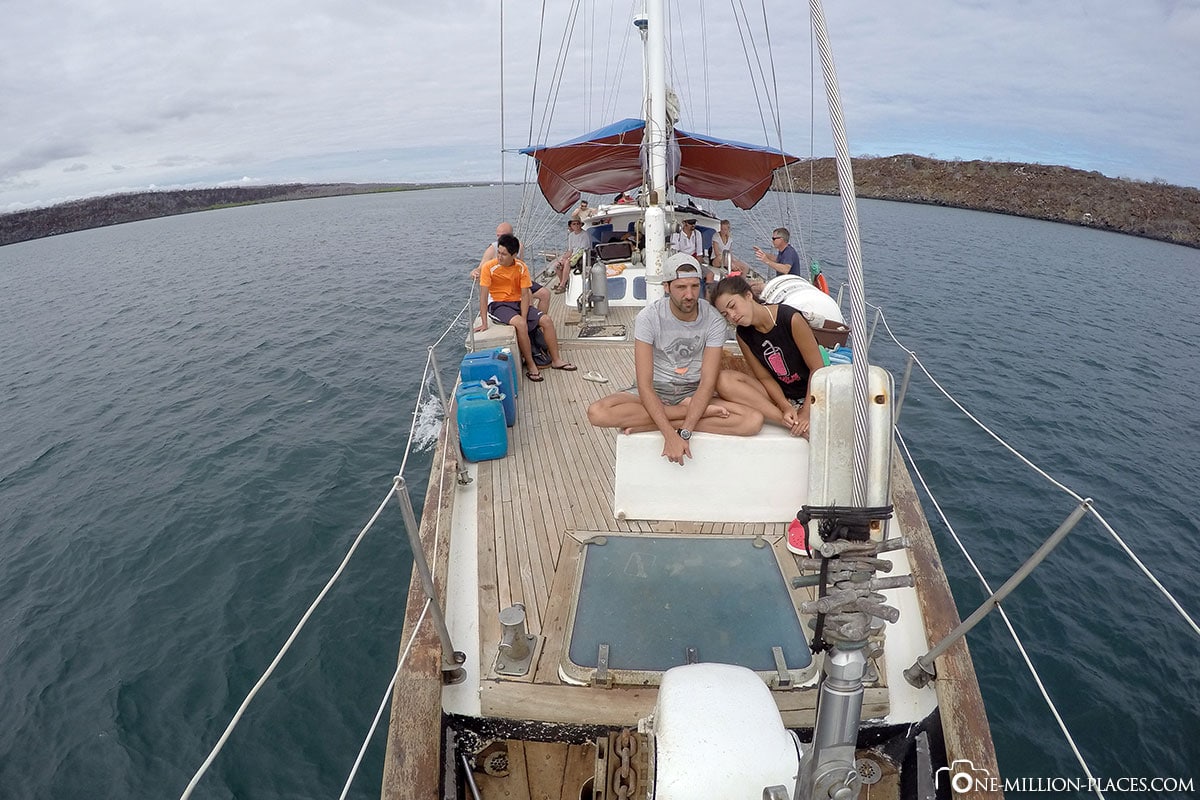 Our return trip by boat

Around 5.30 p.m. we were back in Puerto Ayora and got a stamp for our diving logbook in the diving school. Even if diving on Galapagos (especially with a private diving guide) is certainly not a cheap pleasure, it was a really great and unforgettable day and it was always worth it!

This was our last day on Galapagos. Tomorrow we will return to the mainland from Ecuador to the capital Quito 🙂