Since our plane does not return to Germany until 4.55 p.m. this afternoon, we still had enough time to explore the sea fortress Suomenlinna.

By ferry from Helsinki to Suomenlinna

After an extensive breakfast in the hotel we made our way to the market place, as the HSL ferryn to the fortress island departs here all year long; in summer also the JT-Line water bus. Tickets can be purchased directly at the drop-off point. Either you buy a day ticket for Helsinki, as you can use it in the city itself. Or you buy – like us – a 12-hour Suomenlinna ticket for 5 euros. The crossing takes about 15 minutes. After dropping off the ferry, you have a great view of Helsinki.

The HSL ferries dock at the main pier in the north of the island ofIso Mustasaari. Only a few meters away you will find a tourist information officewhere you can take a brochure or map about the island with you free of charge. Here we had the opportunity to take a closer look at the history of the six islands.

Suomenlinna is an 18th-century fortress that is a popular destination for tourists and locals, with around 900,000 visitors a year. The military use as a naval base was ended in 1973 – with the exception of the island of Pikku-Musta, which still houses the naval school of the Finnish military. In 1991, Suomenlinna was declared a UNESCO World Heritage Site. On the islands themselves, besides the historic fortress, you will also find museums, restaurants… and there are also about 850 people on the islands who live in a supermarket, a library, a gym, a hostel and much more. In the map we had taken in the tourist information, a beautiful main path was marked, where the main sights of the island are located. We haven’t always stuck to it, we’ve run away from the main road from time to time to explore everything.

The main attractions on the island

The first step on the tour is to pass the church of Suomenlinna. It was built in 1854 and a beacon for air and sea traffic is still installed in the church tower. Next you come to the large courtyard of the fortress, which in the 1760s was the main square of the fortress. From here, many paths depart to other parts of the fortress. The dry dock is one of the oldest dry docks still in operation in the world. In modern times, only traditional ships are being restored here. The southern part of the complex is located on Kustaanmiekka. What the original fortress and the associated coastline with the cannons might have looked like, one can only guess here.

The Royal Gate is considered the landmark of Suomenlinna. Unfortunately, it was partly equipped when we visited it. The gate is the original main entrance of the fortress. We spent about 2.5 hours on the island and then made our way to the hotel in the early afternoon.

Helsinki has several Starbucks stores and also its own cup 🙂

The Starbucks City Cup of Helsinki 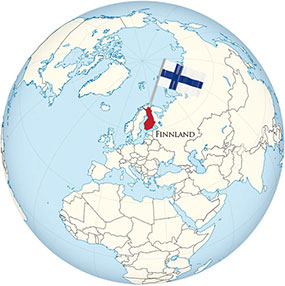