After 7 weeks in South America and 2 weeks in Central America, Las Vegas was the last stop of our trip on the American Double Continent. From here we go on to the other side of the earth. In the end, from our point of view, there are two useful ways to travel from America to the West. Either in the south in Chile via the Easter Islands or in the north via Hawaii. We chose the way over Hawaii and las Vegas is an ideal starting point 🙂

Our flight from Cancun to Las Vegas

Our five-hour flight from Cancun (Mexico) to Las Vegas started today at 10 a.m. and in fine weather we landed in the “Sin City” on time at noon. Las Vegas is fortunately not so hot at the end of February, so we had pleasant temperatures of about 22 degrees. We already knew the gambling metropolis from our previous holidays. But it’s always interesting to see how quickly the city changes from year to year. 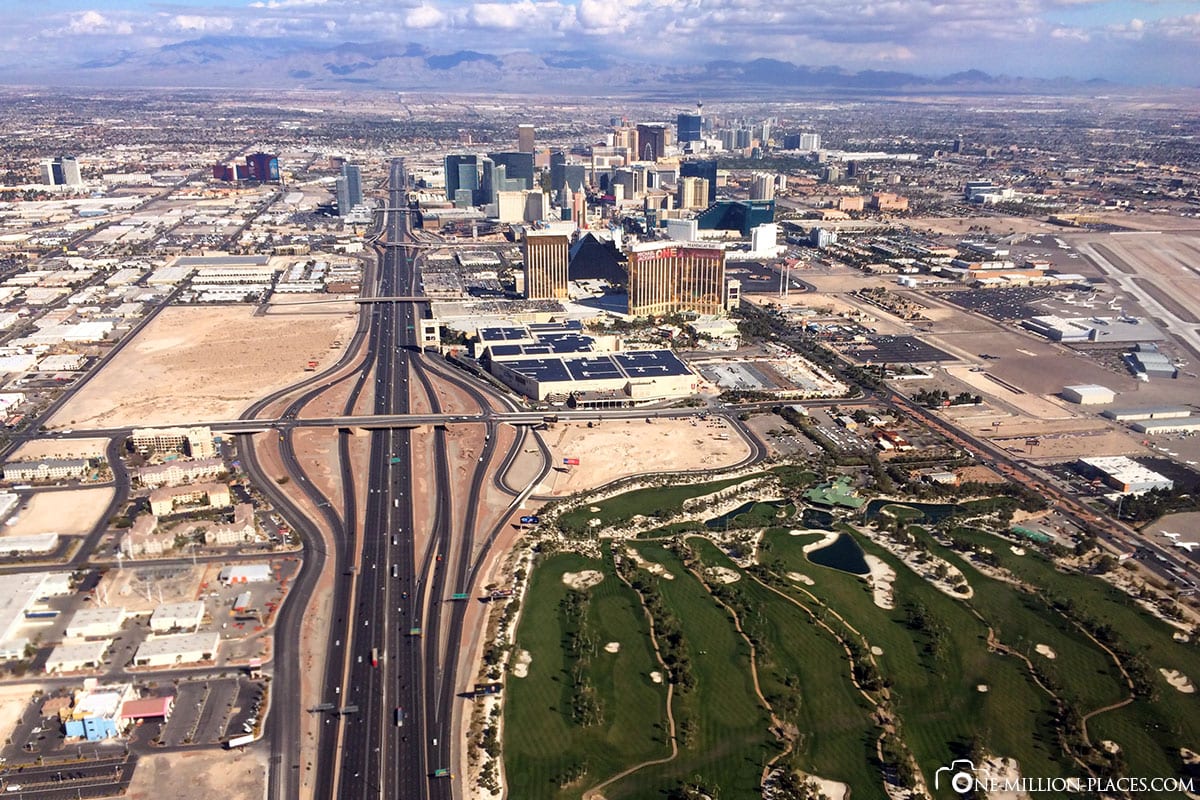 Things to know about Las Vegas

Las Vegas is the largest city in the U.S. state of Nevada and one of the most visited cities in the world, with a population of about 630,000 (2.2 million inhabitants in the metropolitan area). The name of the city is Spanish and means “The Meadows”. In 1931, gambling was allowed in Nevada and caused the city to grow rapidly. Today, the city is one of the fastest growing cities in the United States. The first casinos in Las Vegas were not located on the Strip, but in Downtown Las Vegas. Today, more than 40 million tourists come to the city every year, which is best known for its casinos, numerous shows and world-renowned fairs and conventions. This makes Las Vegas the most visited city in the United States. Sin City, as Las Vegas is also known, is home to 15 of the 25 largest hotels in the world, including Venitian, MGM Grand, Mandalay Bay, Wynn, Luxor, Excalibur, Aria and Bellagio.

By taxi we went to our hotel The Linq, which is centrally located on Las Vegas Boulevard (“Strip”) and recently opened. We stayed here for two nights. For a taxi from the airport you have to reckon one-way with about 25 dollars. The location is perfect – you are practically in the middle of the Strip and can reach everything on foot. The hotel is slightly offset from the Strip and the hotel entrance from the Strip is somewhat hidden. Check-in at the hotel was trouble-free. We had a twin room on one of the middle floors. The room was very modern and clean – no defects. 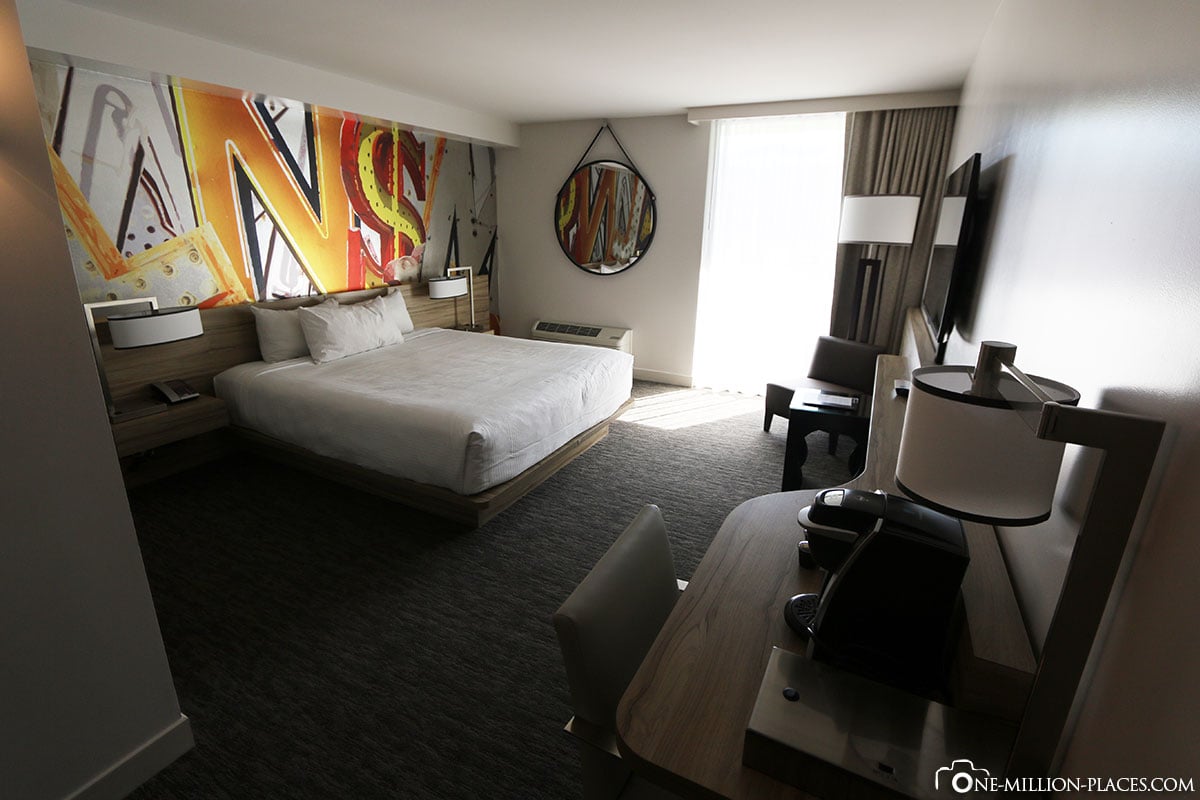 Our room at The Linq

After we checked in and put our belongings in the room, we left right away and paid a visit to the nearby Fashion Mall. On the way back we walked along the Strip. In Las Vegas, there’s something to see on every corner and it’s always full. Then there are the various hotels that can amaze you with their furnishings or their motto. Be it the “Cesar’s Palace” in Roman style, the “Paris” with an Eiffel Tower copy, the “New York, New York” with the skyline of the Big Apple, the pyramid hotel “Luxor”, the “Flamingo” with real flamingos, the “Linq” with a Ferris wheel or the “Venetian”, which is modeled after Venice.

Nearly every hotel has downstairs casinos that are open 24 hours a day, just like most restaurants. So Las Vegas is the real city that never sleeps. Everything glitters, flashes and lights up. We spent the evening in a casino and tried our luck at the slot mashines. What always excites us is the Bellagio with its Fountains.

The next morning we took the bus to the Las Vegas Premium Outlets and strolled through the shops a bit. On the way back we made a stop at the famous “Welcome to Fabulous Las Vegas” sign.

The Magic Show by David Copperfield

At about six we walked to the MGM Hotel as we had tickets for the David Copperfield Show for 7pm. We picked up the tickets last night at a ticket pre-sale, which offers reduced last minute tickets for all shows. And so we saved 50 compared to the original price and had great seats in the middle of the hall. The show lasted about 90 minutes and actually left you amazed.

The Drai’s Nightclub at Cromwell Hotel

Afterwards we returned to our hotel and got fresh, because we wanted to go to the new nightclub of the Cromwell Hotel – the Drai’s. In Las Vegas you can now find trendy Night & Beach clubs in every big hotel and everyone trumps the best DJ’s.

Our tip: Admission to the clubs in Vegas usually costs ’30 for men and $20 for women. We did some research and found the website No Cover Nightclubs. They put one on the guest list for some clubs in Vegas – and that worked without any problems. You have to be in the club up to a certain time, but you can get it for nothing 🙂

After three hours of sleep, the alarm clock rang the next morning and we went to the airport. Next stop for us is Hawaii ♥

The Starbucks Cup of Las Vegas

Las Vegas, of course, has several Starbucks stores and also its own cup 🙂