Key West was the last destination on our Bahamas and Florida trip. After crossing the Overseas Highway, we came to the small, tranquil town to see the most beautiful sights and attractions for a day.

Things to know about Key West

Key West forms the western end of the Overseas Highway and is the southernmost point of Florida. The town has about 25,000 inhabitants and is mostly located on the island of the same name.

More than 2 million tourists a year find their way to Key West. A lot of them come here on one of the big cruise ships. The city, located on the Gulf of Mexico, is best known for its Victorian villas and wooden houses, the Southern Most Point of Continental US and its tolerance and acceptance. Therefore, there is also a relatively large proportion of gays and lesbians in the population and the city is also a very popular destination for these groups. 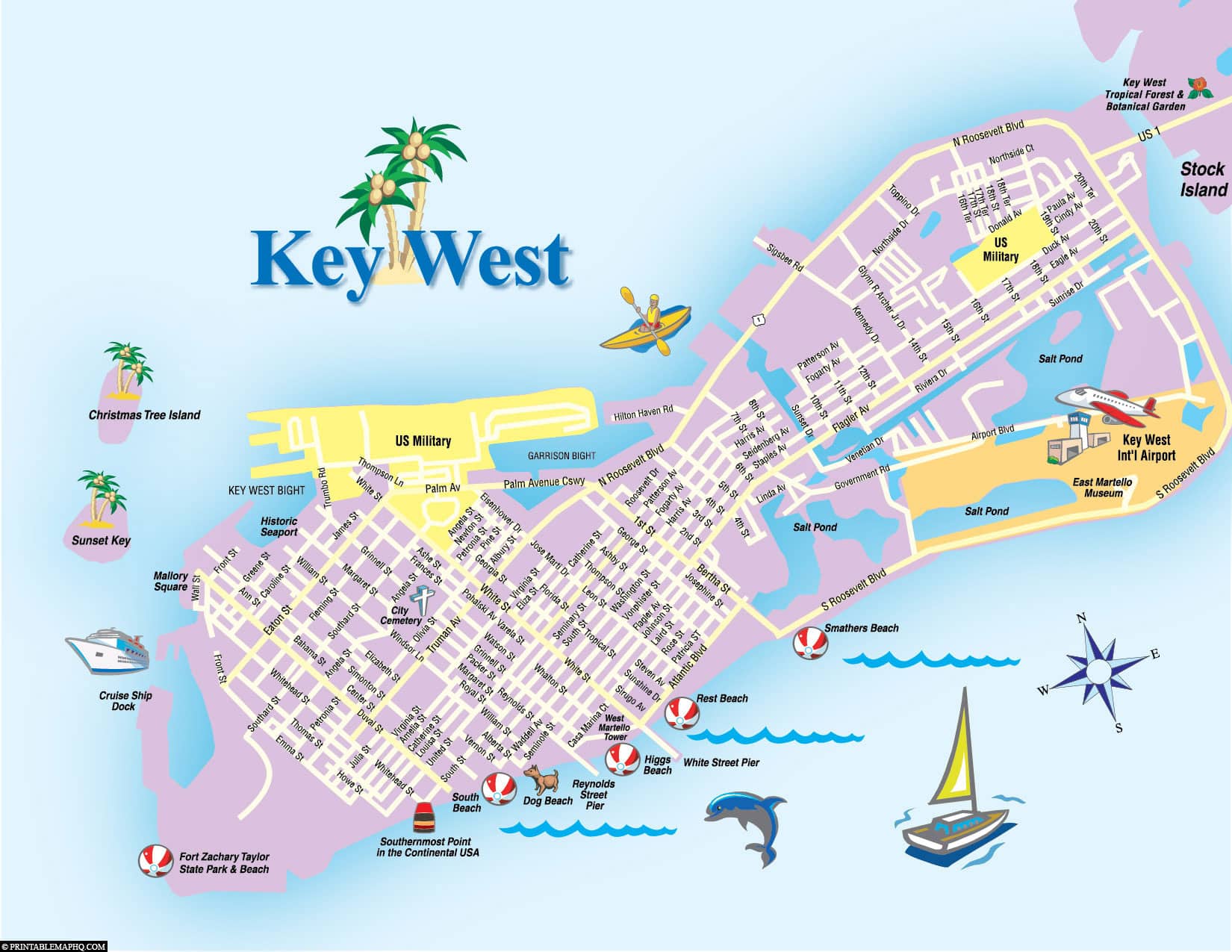 A map of Key West

Finding a nice and affordable hotel in Key West is hard, very difficult. At the time we were in the city, hotel prices averaged between 200 and 500 euros per night. Crazy! We searched for a long time and then decided on the Silver Palms Inn, which offers free parking and from which you can reach the main attractions within walking distance. One night here cost us more than in the Bahamas – we never thought that before. We really liked our room – an absolute well-being room,which was also very generously furnished. In the morning there was a free breakfast buffet, which was not huge, but at least enough to start the day.

What to see in Key West

Whether you want to explore the city as one of many cruise tourists or individually: Key West has all sorts of attractions as well as activities to offer and is ideal for making it To explore on your own in one day: Victorian-style villas, palm-fringed streets, a lighthouse, countless butterflies, museums, restaurants and the famous Sunset Celebration in Mallory Square.

We have drawn all the sights of the city in a map on Google Maps.

The southernmost point of the continental United States

On the one hand, there is the Truman Annex land area a little further west, which is a little further south. In addition, the Key West is geographically an island and is only connected to the mainland by Brcken. The southernmost point of the continental USA is therefore actually located in the southern part of the Everglades (Florida) in the small village of Flamingo. And the most geographically southernmost point of all 50 U.S. states is Ka Lae, located on the southernmost tip of Big Island, Hawaii.

At the Butterfly and Nature Conservatory, countless butterflies of 50 to 60 different species live in a tropical glass house. We were here in the morning for the opening and took a closer look at the butterflies, which are available here in the most beautiful colors and shapes. The beauty of this butterfly house is that you are really close to the butterflies, i.e. it can happen that they sit on one and stay there. In addition to many tropical plants and a small watercourse, there are also 2 flamingos, finches, quails and turtles.

In the middle of the city there is a very nice lighthouse, which we also looked at. For 12 USD you can climb the tower and walk through a small museum. The Key West Lighthouse was built in 1825 to help the many ships entering the port bypass the dangerous reefs. Today you can climb the 88 iron steps to the top of the tower to have a beautiful view of what the lighthouse keepers have watched for more than 120 years.

Next to the lighthouse you can get a glimpse of the Keeper’s Quarters. There is also an exhibition of nautical artefacts, antique furniture, maps and many old photos.

In the immediate vicinity of the lighthouse is the Hemingway Houseon Whitehead Street , which was home to the US Nobel Prize winner Ernest Hemingway and his wife for about 10 years. Built in 1851, the building is built in an American colonal tile made of shell limestone and has a wraparound veranda. Entrance fee is USD 14 per person and includes a 30-minute guided tour of Hemingway’s house.

When you walk through the house, you meet some cats. And that’s not surprising, because Hemingway loved cats. Today there are about 40 to 50 cats living on the property and there is even a cat cemetery here. Since 1968, the Hemingway House has been part of the National Historic Landmark and is a popular sightseeing spot for tourists.

The house can only be visited as part of a guided tour (21.45 USD per person); a few rooms on the ground floor can also be visited without a tour.

Mallory Square is a central square. Together with Mallory Square Market, it is one of the most famous places in the city, where you will find many restaurants, shops and attractions. The highlight here is the evening Sunset Celebration, a kind of street carnival. Every evening, artists and craftsmen offer their works for sale here, and street acrobats and musicians provide the perfect sunset entertainment. This should not be missed 🙂

The aquarium is located right in Mallory Square and is home to alligators, jellyfish, sharks, turtles and many other marine animals. We found the aquarium very small and the pools didn’t really please us, so we had already walked through within 20 minutes and looked at everything.

More photo spots in the city

In addition to the already mentioned main sights, there are many other beautiful photo spots in Key West. For example, the end of US Highway 1, which runs parallel to the Us East Coast from the Canadian border, can be found here. The main cities that pass through the highway are Miami, Columbia, Richmond, Washington, D.C., Baltimore, Philadelphia, New York City, Boston and Portland.

There are also many beautiful old wooden houses and Victorian-style villas in the city, which we really enjoyed.

For sports and water enthusiasts, Key West offers plenty of attractions that we couldn’t escape. Since we had never tried parasailing before, we really wanted to do it. For the late afternoon we bought tickets from Fury Water Adventures, which distributed several ticket counters all over the city. At 6 p.m. we started at the pier; with us there was only another couple on board. With the boat we went out for a few minutes and felt we suddenly hung on the leash, which carried us into the air. And we were already hovering up in the air. A cool feeling! But unfortunately it happened incredibly quickly, because we were only a few minutes in height. But it was definitely worth it 🙂