Today, a visit to Villa Vizcaya, located on Biscayne Bay, was on our agenda. The villa used to be the residence of an industrialist, today it is a museum with a beautiful adjoining garden. In 1970, Villa Vizcaya was listed as a Historic District on the National Register of Historic Places. It has been a National Historic Landmark since 1994.

Villa Vizcaya is a castle-style building in the style of a Renaissance Italian villa. The villa was built in 1914 as a winter residence for the industrialist James Deering. The construction took two years, cost 22 million USD and more than 1,000 workers were involved in the construction of the villa. 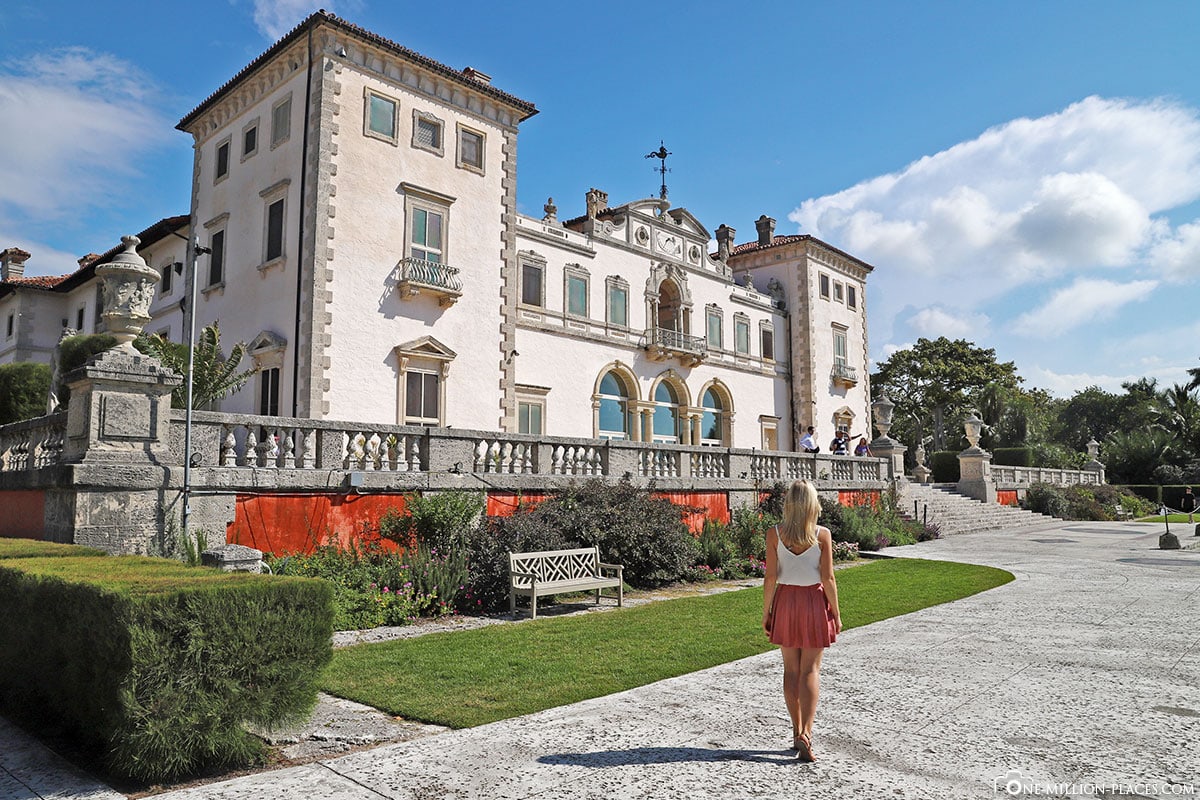 The history of Villa Vizcaya

Between 1914 and 1922, Villa Vizcaya was built in the Coconut Grove area of Miami. At that time, the property was surrounded by subtropical forest and mangrove swamps. The villa was built as a modern interpretation of an Italian villa from the 18th century – both by local workers and European craftsmen. Certain ancient elements and many objects in the main house and gardens were imported from other countries, including Italy and France, and combined with elements of Cuban limestone masonry and Floridian coral architecture.

The builder and owner Deering used the Villa Vizcaya from 1916 until his death in 1925 as a winter residence, but was present here probably only a few weeks. After his death, the villa was inherited by his two nieces, as Deering had no children of his own. Over the decades, after hurricanes and rising maintenance costs, they began selling the surrounding land and outdoor gardens of the property. In 1945, they sold significant parts of the Vizcaya property to a Catholic diocese. In 1952, Miami-Dade County acquired the villa and the Italian gardens and underwent a major restoration for about .1 million dollars. The heirs of Deering donated the furnishings and antiques to the museum.

Vizcaya Museum & Gardens is located in the northern Coconut Grove area of Miami overlooking Biscayne Bay, just 1/4 mile from I-95, a mile from central Miami and 10 miles from Miami Beach(route planner Google Maps).

The villa is open Wednesday to Monday from 9.30 a.m. to 4.30 p.m. The property is closed on Tuesdays, Thanksgiving and Christmas. Admission for adults is USD 22 and parking is free of charge directly on the premises.

Audio Guide: In addition to the guided tour, you can also explore the villa and the gardens yourself with an audio guide for 5 USD per person. The Audio Guide is available in English, Spanish, French and Portuguese.

Garden tours: There is also a 45-minute walk through the gardens of Vizcaya, where you can learn a lot about the design and the exotic plants. From November to May, these interactive guided tours take place on Wednesdays and Fridays at 2 p.m. and on Saturdays and Sundays at 10:30 a.m. (cost: USD 5 per person).

A map of Villa Vizcaya

Here you can see a map of the complete terrain of Villa Vizcaya. The map can also be downloaded here as a PDF document. 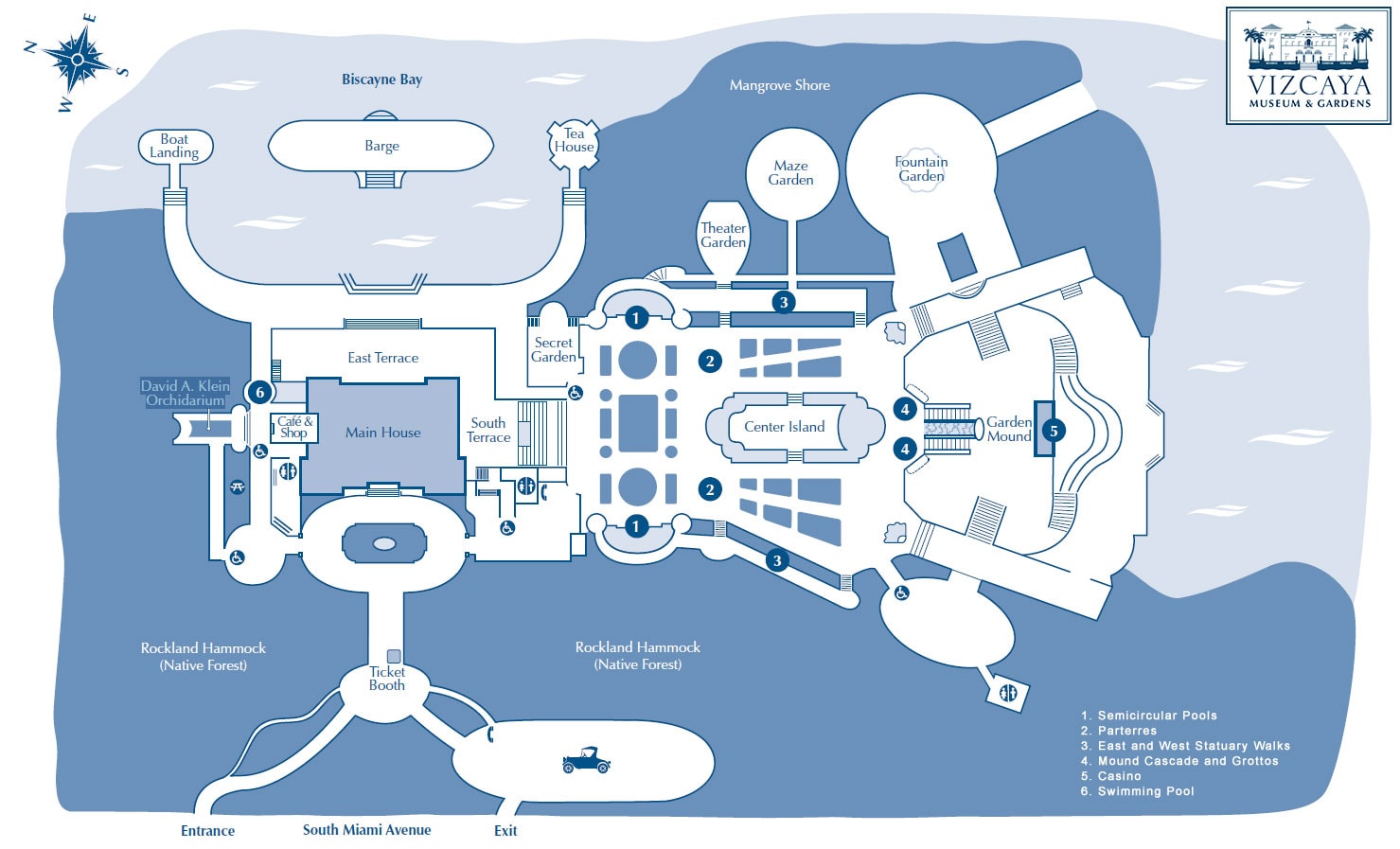 A map of the Vizcaya Museum & Gardens

A tour of the main house

The villa has been designed to take full advantage of its location on the Bay of Biscayne. Deering wanted you to see Vizcaya from the sea. The east facade shines with a wide terrace, beautiful stairs and an old barge in front of the sea.

The main house comprises 54 rooms,34 of which are open to the public. We walked through the building without a tour, so that we could see everything in peace and at our pace. The centrepiece and main living area of the house is the courtyard, which was originally open to the sky. Today, a huge glass roof is above the courtyard to protect the building from weather influences.

On the first floor, several reception rooms, the library, the music room and the dining room surround the courtyard. On the second floor was Deering’s personal suite of rooms and guest rooms, as well as a breakfast room and kitchen.

We liked the tour through the 40,000 m2 garden. The entire landscape is reminiscent of gardens from Italy and France of the seventeenth and eighteenth centuries. Everything is very well maintained and in a top condition. The garden of Vizcaya is characterized by an abundance of ornate fountains, architectural structures and ancient sculptures. Many meadows and hedges are arranged in geometric shapes. One of the most beautiful photo spots we found in the old Tea House, from which you have a great view of Biscayne Bay.

It is not surprising that Villa Vizcaya is an extremely popular place for weddings and other special occasions due to its architectural beauty. We have seen a lot of families walking through the garden from photo spot to photo spot with their camera equipment. The focus was always on a teenage girl in a particularly pompous ball gown. In the aftermath, we found out that these are photo shoots as part of the Quincea’era celebrations. In Latin American families, the daughter’s 15th birthday is especially celebrated to honor the transition of 15-year-olds from child to woman.

The original plan for the gardens included a series of terraces that began at the main house and ended in a large lagoon. But it was recognized that the light reflected by the water would dazzle garden visitors and that the gardens would merge into the jungle – hardly a fitting conclusion for such a beautifully designed landscape. So the entire garden was quickly redesigned and an artificial hill was added, which diverts the view away from the house and creates long perspectives on its sides.