If you are in South Florida, an airboat tour through the Everglades National Park is not to be missed. We both knew the airboat tours along the Tamiami Trail between Miami and Naples. And together we did such a tour a few years ago in Orlando. Since this is always very funny and there is a lot of nature to see, we really wanted to repeat it again 🙂

Things to know about the Everglades National Park

Founded in 1934, Everglades National Park is located in southern Florida and protects about 20 of the original Everglades. This makes Everglades National Park the third largest national park in the United Statesafter Death Valley and Yellowstone National Park. Since 1979, the national park has been a UNESCO World Heritage Site,and three years earlier it was protected as a biosphere reserve. The Everglades are a tropical marshland, a network of wetlands and forests fed by a river whose water vein can be up to 60 kilometers wide and only a few centimeters deep. However, you don’t see and notice much of the river, as much of the area is covered with grass and bushes and because it only flows about one meter per hour.

The park is an important place for many animals: 36 endangered or protected species live in the park, including the only wild flamingos in the US, the Florida Panther, the American crocodile and the West Indian sea cow (Manatee), along with 350 bird species, 300 freshand and seawater fish, 40 mammal species and 50 reptile species. The Everglades are, by the way, the only region on Earth where both alligators and crocodiles live.

A map of Everglades National Park can be downloaded here. 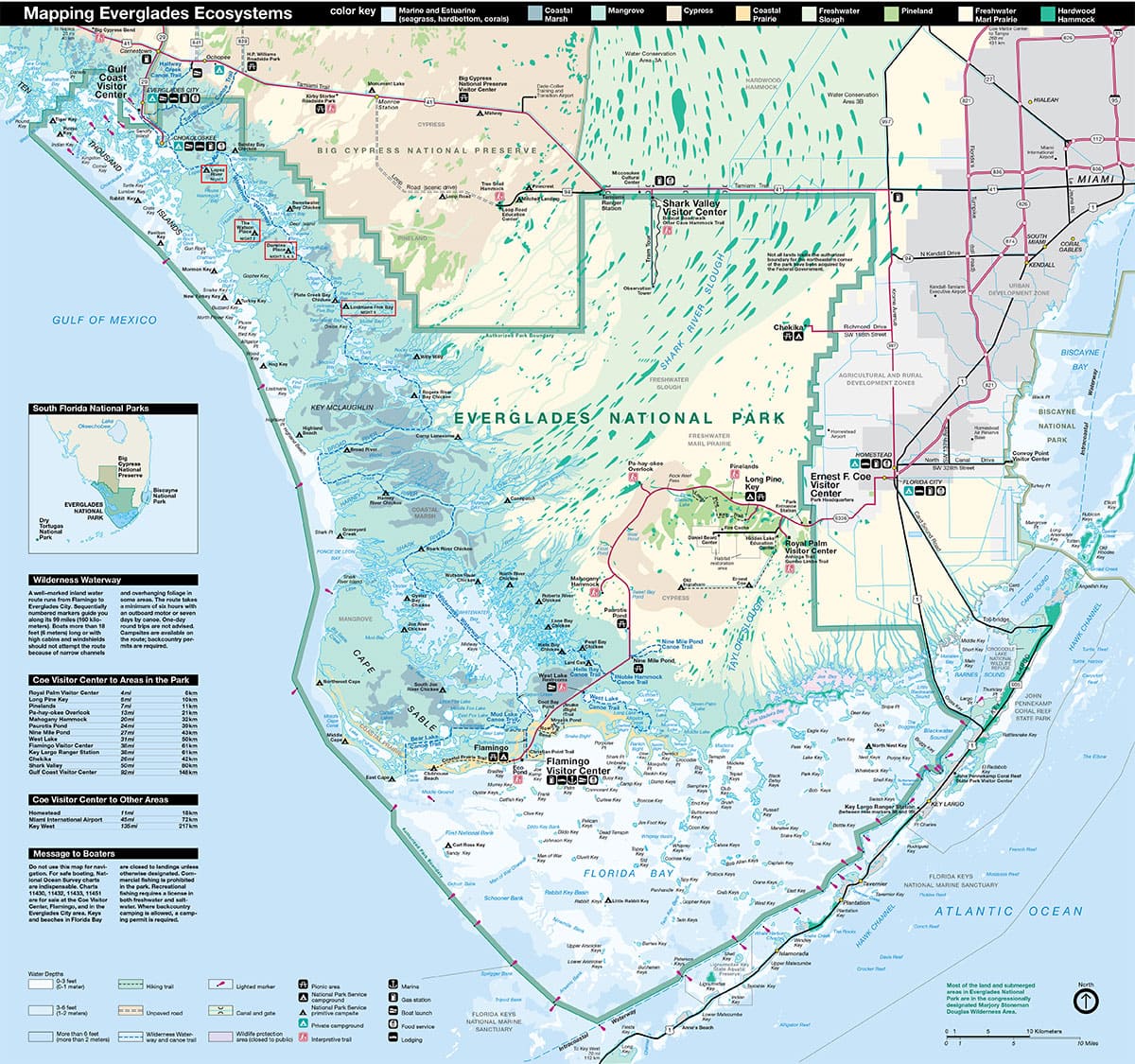 The Everglades Alligator Farm in Homestead

On our way from Miami to Key West, we were looking for suitable airboat tour operators that are right on our route. We became aware of the Everglades Alligator Farm, which is located south of Homestead and is only a few minutes away from the Dixie Highway (US-1) (Route in Google Maps) 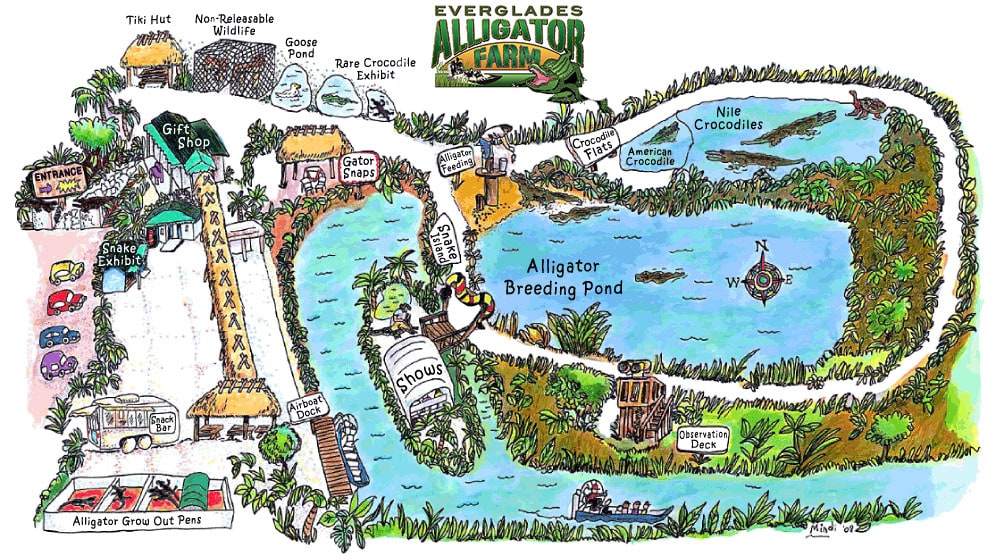 A map of Everglades Alligator Farm in Homestead, Florida

Alligator Farm is South Florida’s oldest alligator farm and is open every day from 9 a.m. to 5:30 p.m. Shortly before we arrived here around 2 p.m., it was something that we were stuck in the car for a short time and wondered whether an airboat tour was even worthwhile in such heavy rain. But the short wait was worth it, because 10 minutes later the rain front was gone 🙂

Since the Airboat Rides only take place here every hour, we have first informed ourselves when the next tour will take place, so as not to waste too much time. And behold, in the next 5 minutes the next tour should start. So we quickly bought the tickets. Per person, the Airboat Tour is paid 28 USD on site. Online, it’s slightly cheaper at 25 USD. You can also print out a 3 USD coupon on the official website of the farm, with which you can save a bit on site.

Since the airboat tour was supposed to start in the next 5 minutes, we went directly to the entry point, where there were already a lot of other people. Each boat can accommodate about 20 to 25 people. The boat driver sits on top of a seat in order to be able to control the boat in the best possible way. Airboats are used here in the Everglades because the swamp area is very low and you would destroy a lot by engines.

The most important utensil in the airboat are the headphones that you get handed out before the tour. The propeller from the boat gets really loud, so you have to protect your ears. When everyone had found their place in the boat, it was time to go. At first very slow, so that we could see right and left of the boat if we see alligators in the wild. And behold, after a short time we have already seen one. And also an iguana.

The airboat tour lasted a total of about 20 to 25 minutes. We were told beforehand that we would definitely get wet, so we would rather have ourselves in the back row. And that was also a good thing, because after a few minutes the boat got faster and faster and almost flew over the swamps. From time to time, the boat driver has also made turns in which the dirty swamp water has only splashed. All of them, who were in a white T-shirt, suddenly had a speckled T-shirt. We found these spins a bit unnecessary, after all, it’s about enjoying the nature of the Everglades – you can’t necessarily do that with this rollercoaster ride.

The entrance fee includes a snake show, which takes place three times a day at 10am, 1pm and 4pm. Here some local snakes are presented and at the end you can hold them… if you dare 😉

In the Everglades, however, there are not only native, harmless snakes. There are also very dangerous species, such as pythons. Since the beginning of the 2000s, they have been spreading continuously in the Everglades, so that there are already special python hunters. There are two theories as to how this python invasion came about: (1) In the 1980s, it was common in Florida to own reptiles as pets – mostly exotic animals from Africa or Asia. But many of the owners did not expect that their baby snake, which is a few centimetres small, could increase by tens of times. So you just put the animals out because you couldn’t hold them anymore. (2) Hurricane Andrew destroyed a reptile breeding facility in 1992, bringing 900 baby pythons into Everglades National Park.
There are now said to be more than 100,000 pythons in the Everglades, which pose a very serious threat to the animals and people in the area.

The many different alligators

There are countless alligators on the grounds of Alligator Farm. They live in a large lake and were mostly outside in the sun when we took a look at the terrain. There is also a show here three times a day at 11 a.m., 2 p.m. and 5 p.m., but we just missed it.

In another corner of the farm there is an area where you can see baby alligators. Pretty many baby alligators even! We were a bit shocked by the amount of alligators in a pool – that was just way too many. It is really questionable whether the animals can be kept in an appropriate manner. The pools are divided into depending on the age of the alligators – from very small ones in the left pelvis to larger ones on the far right.

At the basins there are small feeders where you can pull small pellets for 25 cents. With this you can feed the small alligators. This is always an unbelievable hustle and bustle when the many alligators rush on to the small pellets.

More animals on the farm

In addition to the hundreds of alligators, you can also see a few terrariums with snakes on the farm, an enclosure with turtles and one with 2 really big emus. Here, too, there are feeders and as soon as you throw in money here, you are already eagerly awaited by the emus 🙂

A video from the Airboat Tour

On the website of the Everglades Alligator Farm you will find a short video.