The wine town of Volkach am Main was the third stop of our week-long river cruise with A-ROSA Silva, which took us from Nuremberg to Bamberg, on to Volkach and Miltenberg through the Upper Middle Rhine Valley to Lahnstein, Koblenz and Cologne. Originally we should have docked in Würzburg. However, since the city was declared an inner German risk area the day before because of Corona, we have approached an alternative stop as part of the A-ROSA “Safety First” strategy.

The journey from Bamberg to Volkach

After leaving the Bamberg harbour, we reached the place where the Regnitz near Bischberg – northwest of the city centre of Bamberg – flows into the Main shortly afterwards. It is interesting that the Regnitz at this point – measured by the amount of water – is even a quarter larger than the Main. It takes only 50 to 60 minutes by car to take the Bamberg-Volkach route. Due to the many locks and the comfortable speed of the boat, it took almost 12 hours.

With our river cruise ship A-ROSA Silva we have moored at the “Astheim pier”, which is located opposite Volkach on the other bank of the Main and in the immediate vicinity of the Main Bridge. From here it was only a few minutes walk to the center of Volkach. 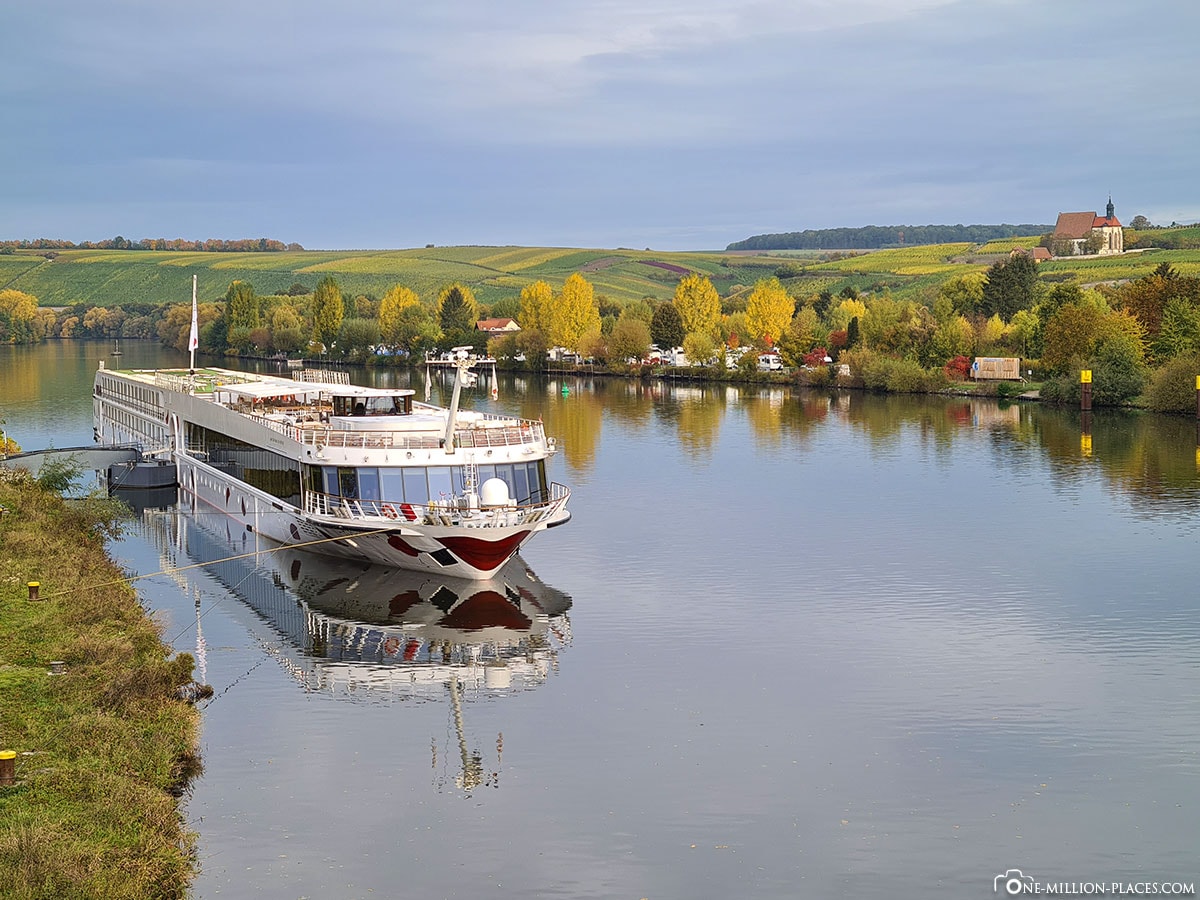 Things to know about the wine town of Volkach

Volkach is a small, historic town on the Main With about 10,000 inhabitants. The history of the city goes back more than 1,100 years to the past. The fact that almost every century has shaped the city can still be seen today: for example, there is a medieval city wall, a Gothic parish church, an impressive Renaissance town hall and the modern Main Bridge.

The city has made a name for itself as an important wine and tourist destination in the Franconian wine region, as a good quarter of the Franconian vineyards are cultivated on the Mainschleife, which is thus the largest contiguous wine-growing region in Franconia.

The wine town is known above all for its location on the Volkacher Mainschleife. This is probably the only place on the entire Main with its 527 river kilometers where the river actually makes a loop.

The Main Loop near Volkach

A walk through the old town of Volkach

From our pier we reached the old town of Volkach in about 10 minutes on foot via the Main Bridge. Here we took 1.5 hours to stroll through the old town and the cobbled streets.

During our walk through the city we could see some relics of the former city fortifications. In particular, the outer city wall, which once ran between the inner wall and the kennel, is still largely preserved today.

In the middle of the 13th century Volkach was appointed a city and thus also had the right to a fortification. Therefore, around this time there was already a ring of walls and two gate towers for entry and exit into the city. The Upper Gate used to house the city prison, whose prison cells are still inside. The Lower Gate is located at the eastern end of the main road.

Around the market square

The market square with the market fountain forms the heart of the city. Here is the Renaissance town hall built in 1544, which stands out for its external staircase and half-timbered bay window. On the ground floor is the Tourist Information Volkach, where you can find information about city tours, activities and excursions. Directly on the market square stands the Catholic parish church of St. Bartholomew which was built from 1413 until the 18th century. Particularly striking is the 54-metre-high church tower, which is already clearly visible from afar.

Other places worth seeing are the Gänseplatz with fountain, the Baroque Barn, the lovingly restored building of the old railway station and the former representative town palace Schelfenhaus from 1719. Above the town of Volkach, in the middle of the vineyards, lies the Catholic pilgrimage church of Mary inthe vineyard , which was first mentioned in 1158 and has always been a popular pilgrimage site for believers.

A map with all sights in Volkach

On the following Google MyMaps map we have drawn all important sights and photo spots in Volkach.

A-ROSA Silva - Our river cruise “Main-Romance” with A-ROSA
Nuremberg - Sights & Photo Spots in the Old Town
Bamberg - The sights in the World Heritage Old Town
Volkach - The wine town of Volkach on the Main River
Miltenberg - The historic town of Miltenberg – The Pearl of the Main
Rhine - River cruise through the World Heritage Upper Middle Rhine Valley
Koblenz - Sights of the city on The Rhine & Moselle
Cologne - Cathedral, Old Town & the Chocolate Museum