For today’s day of our Gebeco tour we had two options: Either we do something on our own in Hoi An or we join the bookable trip to the temple city My Son. Since we were very interested in the temple complex, which has been a UNESCO World Heritage Site since 1999, we decided on the second variant.

Our trip to My Son started around 8.30 am at our hotel in Hoi An. For the 50 km long trip to My Son we took about 1.5 hours by coach. When we arrived, it had suddenly poured out of buckets and it didn’t want to stop. What a pity! But luckily it stopped after about 20 minutes, so we only had to run in the rain at the beginning.

My Son is a temple city in central Vietnam. From the 4th to the 13th century it was the religious and cultural centre of the Cham, which were strongly influenced by Indian culture and, for example, have also adopted the Hindu beliefs (worship of the god Shiva). Since the 7th century, the first wooden buildings have been replaced by brick buildings – built with red bricks and completely without mortar or concrete. A special tree resin was used to hold the bricks together.

The complex was forgotten after the disintegration of the Champa Empire. At the end of the 19th century, the jungle-overgrown complex was rediscovered by the French colonial masters. The site once had 70 temples,but unfortunately much of the site was destroyed by U.S. bombing during the Vietnam War. However, some temples have been preserved to this day.

In 1999, the ancient temple city of My Son was added to the list of UNESCO World Heritage Sites because “… the temple city symbolizes the cultural exchange and influence of Hindu architecture on Southeast Asia and, in addition, the Champa culture was an important part of the political and cultural history of Southeast Asia…”.

The park is open daily from 6.30 a.m. to 5 p.m. If you are on the way individually we would recommend to come here in the afternoon, because until noon the whole tour groups are on the premises and it can be very crowded accordingly. Entrance to the My Son temple complex is 150,000 dong (about 6 euros).

At the beginning of the complex there is a small museum on the right, which is best looked at before you drive to the actual temple complex. The museum houses many statues as well as information about the architecture of the temple complex. You will also get an insight into the culture, religion and way of life of the Cham.

The start of the tour & a local Vietnamese dance

After the museum, you cross a bridge and get to a bus station where the free electric shuttle buses leave for the temple complex, which is 2 kilometres away. Each of the shuttle buses can accommodate about 12 to 13 people, so there are usually no long waiting times.

After the shuttle bus had dropped us off, we had to walk for a few more minutes until we passed a stage and a larger souvenir shop. On stage there is a performance of a traditional Vietnamese dance once a day in the morning, which is always very well attended, especially because of the whole tourist group.

The Ruins of the Temple City of My Son

The temples are in different condition, with some still in the process of restoration. They are in different “groups” marked with A to L. Four of the sites (A, B-C-D, E-F and G) are relatively close to each other. The ruins H, K and L are a little further away, but on the large overview maps these are clearly marked.

Sites A, B-C-D, E-F and G are connected by well-marked paths. There are no official routes to the other sites, as they have not yet been fully restored. One should also not risk staying away from the marked paths, because to this day countless landmines are hidden in the soils around My Son.

The ruins of The Guppen B, C and D

The first ruins to be reached on the circular route are those of groups B, C and D. Before we looked at the temples, our Gebeco tour guide provided us with an overview map with interesting information about the facility.

In group B-C-D there are the most beautiful, best preserved temples and you can even go into some. Some temples show beautiful reliefs, mainly cham motifs.

The Ruins of Guppe A

The ruins of Group A are actually only isolated, partly overgrown by nature remnants of ancient temples.

The Ruins of Guppe G

When we reached the ruins of Group G, we were overwhelmed by the crowds. In the first group B-C-D the tourists had gone well due to the size of the site, but since the group G is a bit more compact, everyone was concentrated in a heap here, so we couldn’t take any nice photos at first. So we used the time to look at the ancient temple of more. And behold, after 15 minutes almost all tour groups were gone, so we could take some really nice photos in peace 🙂 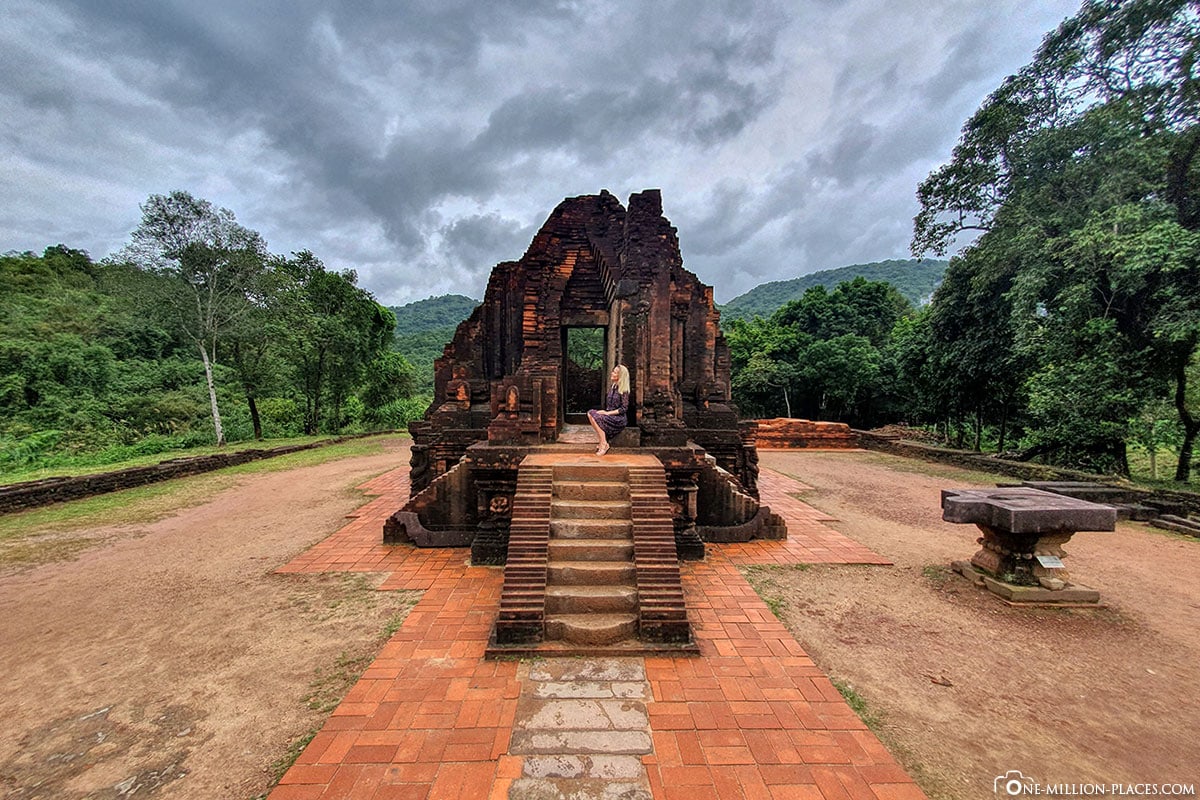 The Ruins of the Temple City of My Son

The ruins of the Guppen E and F

The last group to be reached on the circular route are the ruins of groups E-F. Here you could see what a restored temple looks like, which was recognizable by the bright red bricks. Another area of the group was still completely covered, because the restoration is still in full swing.

Lunch in Hoi An

After about 2 hours in the temple complex we went back to Hoi An around 12.30 pm and enjoyed a very tasty lunch menu in a restaurant with our tour group.