For today we have decided on an optional excursion with Gebeco, which has taken us and almost our entire tour group to the Mekong Delta in the south of Vietnam. In rural Ben Tre, we first immersed our bikes in the culture of the Mekong Delta. On shady paths we reached Mr Six, who invited us to his house for a short rest. After an extensive lunch, during which we were allowed to try a local specialty, we finally explored the narrow waterways by boat and watched everyday life on the riverbank.

By bus from Saigon to Ben Tre

Just in time at 8 o’clock we started at our hotel and we made our way to the Mekong Delta. For the approximately 80 km long journey (Google Maps) from our hotel to Ben Tre in the Mekong Delta we took a little more than 2 hours by bus. In between we made a short stop at a motorway rest stop to represent our feet.

The Mekong is a river in Southeast Asia that crosses six countries (China, Myanmar, Thailand, Laos, Cambodia, Vietnam) over a length of 4,350 to 4,909 kilometers. This makes it one of the twelve longest rivers on earth. The source of the Mekong could not yet be determined precisely, as it arises from several confluences in hard-to-reach areas of the highlands of Tibet.

From Cambodia, the Mekong flows across the border into southern Vietnam. South of Saigon, the river widens to the 70,000 km2 Mekong Delta and flows into the South China Sea. Due to the suspended matter deposited by the river, which colour the water yellow-brown, the Mekong Delta with its nine side arms is considered the lifeline of the south and fertile “rice bowl” of Vietnam. It also produces foods such as fish, tropical fruits, vegetables, sugar cane and coconuts.

The Mekong Delta is relatively densely populated. Due to the large network of canals, the greater part of the traffic and the handling of goods takes place on the water. The so-called “floating markets” are known, where trade takes place exclusively on ships. We would also have liked to have seen these floating markets; unfortunately, this was not provided for in our daily programme. One reason for this is certainly that the market is drifting early in the morning and we were only in the Mekong Delta around 10 a.m. – at a time when the action is already over. 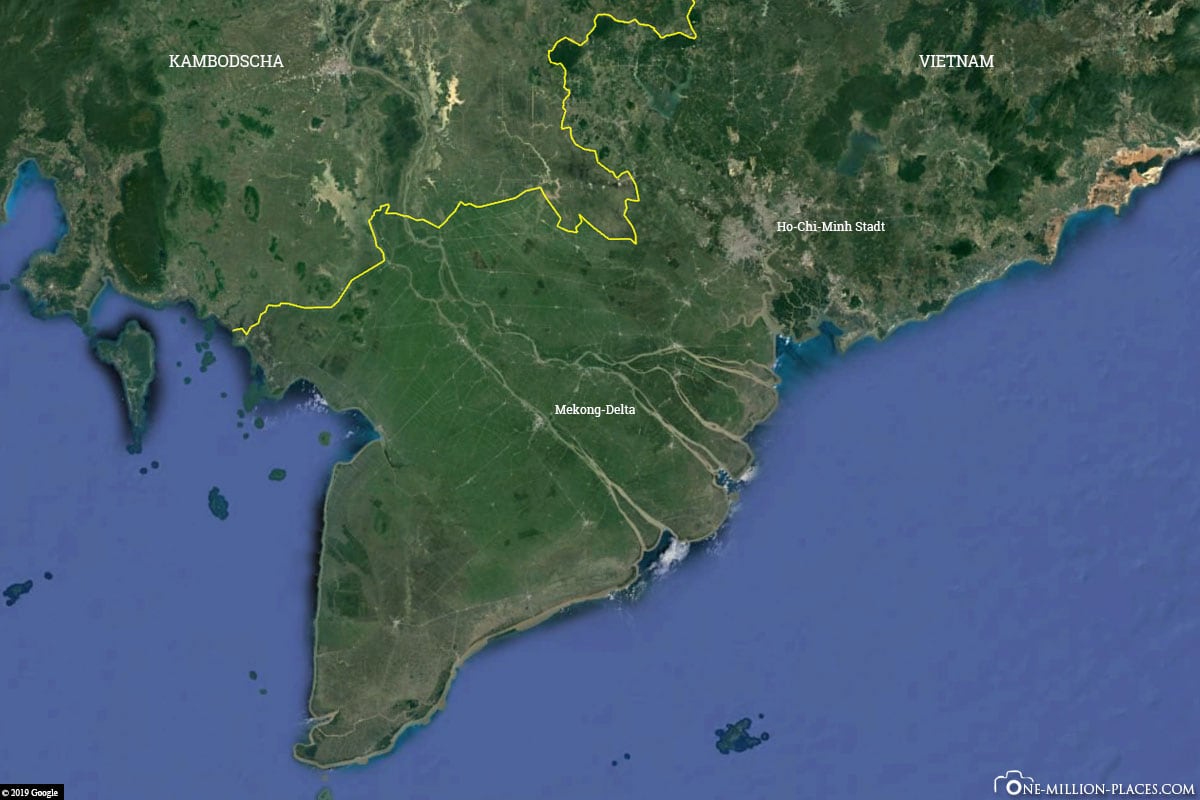 The Mekong Delta in Southeast Asia

The route of our current tour

Our tour today By bike and boat in the Mekong Delta incl. Lunch, which costs about 50 EUR per person, can be roughly divided into 5 activities:

1) Cycling through the Mekong Delta
2) A visit to Mr. Six’s house
3) Lunch at the Séu Khnh Restaurant
4) A boat trip on the Ben Tre River
5) Visit to a manufacturer for Coconut Candy, Rice Wine & Honey

With Google Maps, we couldn’t quite understand where we were going, but we tried to mark our approximate path into a map. 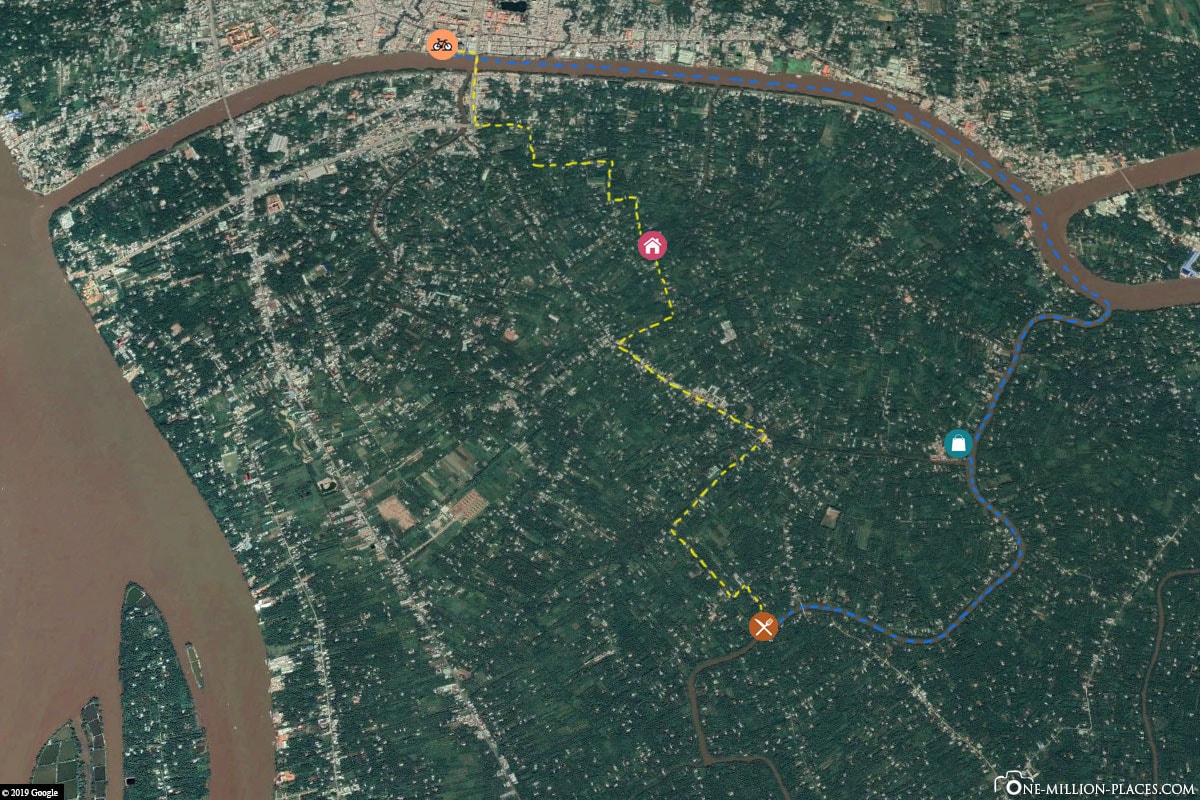 The approximate route of our tour of the Mekong Delta

Cycling through the Mekong Delta

At the bike rental of Nam Bo Tours in Ben Tre the bikes were already ready for us, so that we could start our bike tour directly. With a local guide we drove a little bit through the city, then over a large bridge, then to more rural, wooded areas. It walked on shady paths past coconut palms, banana trees and native villages.

Our first stop was the house of Mr. Six, a local who gladly invited us to a short rest in his house. He first showed us some private photos from previous years and then we were allowed to go through his house and look at it from the inside. The house was very full of antique ceramics, all sorts of pottery such as bowls, bowls, vases and sculptures, so that you had little freedom of movement. At the end of our visit there was coconut water from freshly opened coconuts,which are too well in Mr Six’s garden.

Our Lunch – Elephant Ear Fish at the S’u Khonh Restaurant

From Mr. Six’s house, we continued our bike ride through the Mekong Delta, past a temple and local villages until we arrived at a riverside restaurant after about 30 minutes.

In the local restaurant we were able to taste – after a whole series of different appetizers – a very special ity: an elephant ear fish. This fish is only eaten in southern Vietnam around the Mekong Delta and is served in a stand with head, fins and skin. The meat of the fish is bright and is served with various side dishes. It is customary to roll a piece of fish meat into rice paper, refine it with fresh spices and then dip this “fish roll” into fish sauce. A special taste experience!

A boat ride on the Ben Tre River

After the delicious lunch break we were picked up at the restaurant by boat and were able to sit back and relax. On our boat trip we explored the narrow waterways of the Mekong Delta and observed the local everyday life on the river bank.

Visit to a manufacturer for Coconut Candy, Rice Wine & Honey

On our way back to Ben Tre we made a little stop in a factory for coconut sweets, rice wine and honey. Here we could follow the way from the fresh coconut to the packed coconut caramel candy live, which was super interesting. Of course we were also allowed to taste (and buy) the different sweets.

Exciting was also a large transparent glass, in which dead snakes lay in rice wine. A typical snake schnappsthat was first actually made here in Vietnam. For the production of this snake liquor mainly poisonous snakes are used, since the snake venom is given healing effects for almost every disease. However, many of these myths are also said to have been invented. We were offered a sip of this snake schnapps, but we thankfully refused 😉

Around 3 p.m. we arrived back in Ben Tre, where our bus was already waiting for us. With many new impressions in our luggage we went back to Saigon, where we arrived again – due to traffic jams – only around 5.30 p.m.