A visit to the Great Wall of China must not be missed, of course, if you are in China or Beijing. And that is exactly what we should be doing today.

Our tour to the Great Wall of China

At home we had already done a bit of research, which tour provider is best for this. In the end we decided for a private tour with Untouched Great Wall Hike, because we were able to design the tour here very individually and according to our wishes. After some nice e-mails with the agency (Joe) we agreed on the following day tour. Thus we had the opportunity to see on the one hand the restored part of the wall at Mutianyu, but then also as a contrast an original part of the wall at Huanghuacheng.

The way from Beijing to Mutianyu and Huanghuacheng

Our guide Andy picked us up on time at 7 o’clock this morning from the Hotel Days Inn Forbidden City Beijing and drove with us the 90 km long route to Mutianyu. This piece of the wall is not quite as crowded as the most famous wall in Badaling, to which most tourists go. Since there was a lot going on on the roads, we didn’t arrive until about nine o’clock.

From the valley station up to the Great Wall of China

The valley station on the wall consists mainly of a few stalls, the ticket office, a tidy toilet and the cable car stations. Even the fast food has made it to this point: there is also a Subway. There are 3 different waysto get to the wall in Mutianyu. You can walk the approximately 4000 steep steps to the wall, which takes about an hour. Or you can use a cable car or a chairlift. The same paths go back or you can also use a summer toboggan run. The prices are as follows:

We had decided on the option with the chairlift up and down over the toboggan run. All current prices and opening hours can be found here: mutianyugreatwall.net From the valley station we went up in a few minutes with the chairlift, from where the two kilometer long restored section of the wall with numerous watchtowers stretches.

Things to know about the Great Wall of China

The Great Wall of China (also known as the Great Wall) is a historic border fortification and, according to the latest surveys, extends over a length of 21,196 kilometers through China and comprises 43,721 individual objects and locations. The wall consists of a system of several sections of different ages and constructions, some of which are not connected to each other, whose main wall is 2,400 km long. In total, the wall covers 15 provinces, autonomous areas and cities. The Great Wall is now constantly being restored by state funding, the sections of the sections are less than 10 intact,while the rest are in poor condition. In some cases, only the massive foundations are still there. Today, four sections of tourists can officially be visited. The most famous restored section of the wall stretches near Badaling, 70 km northwest of Beijing. Other touristic sections are located at Mutianyu, Huanghuacheng, Simatai and Jinshanling. [Source: Wikipedia]

A total of 3 million workers were involved in the construction of the wall between the 5th century. and 16th century Involved. It is hard to imagine how this building, which stretches along the ridges of the hills through green landscapes, was built at that time. The Great Wall of China is therefore rightly one of the 7 new wonders of the world on earth and is also a UNESCO World Heritage Site.

The size & construction of the Great Wall of China

The Function of the Great Wall of China

The Great Wall of China was originally built as a purely defensive facility. The watchtowers were used for this purpose, of which there are said to have been up to 25,000 stück in the heyday of the building. They were signal towers in the first place, but at the same time they were also weapons depots. As soon as an enemy was spotted, a guard on the tower lit a fire, informing the surrounding towers of the approaching threat. In this way, a well-thought-out, effective protection systemwas created, which certainly played a major role in China’s path to becoming a world power. [Quelle chinesischemauer.net] 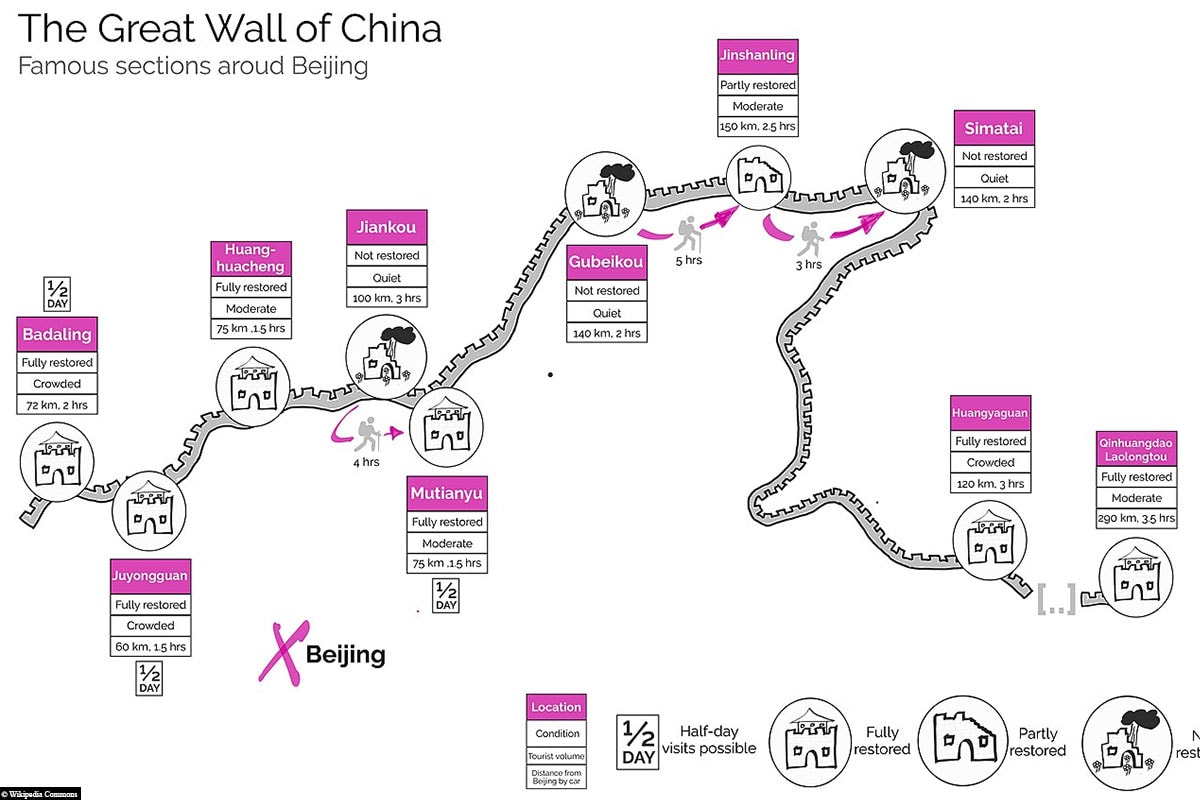 Sections & State of the Great Wall of China

The Wall Section at Mutianyu

The Mutianyu section (Chinese for “Valley of Beautiful Fields”) stands out under the sections of the Great Wall due to its large scale and quality of construction. Built mainly of granite, the wall is seven to eight metres high and four to five metres wide on the crown of the wall. A special feature of the 2,250 meter long section are the 22 watchtowers. The section is filled with battlees on both sides, so that the defenders could shoot on both sides. The gatehouse at the passageway consists of three watchtowers, one large one in the middle and two smaller ones on both sides. The towers stand on a terrace and are connected to each other inside. [Source: Wikipedia] 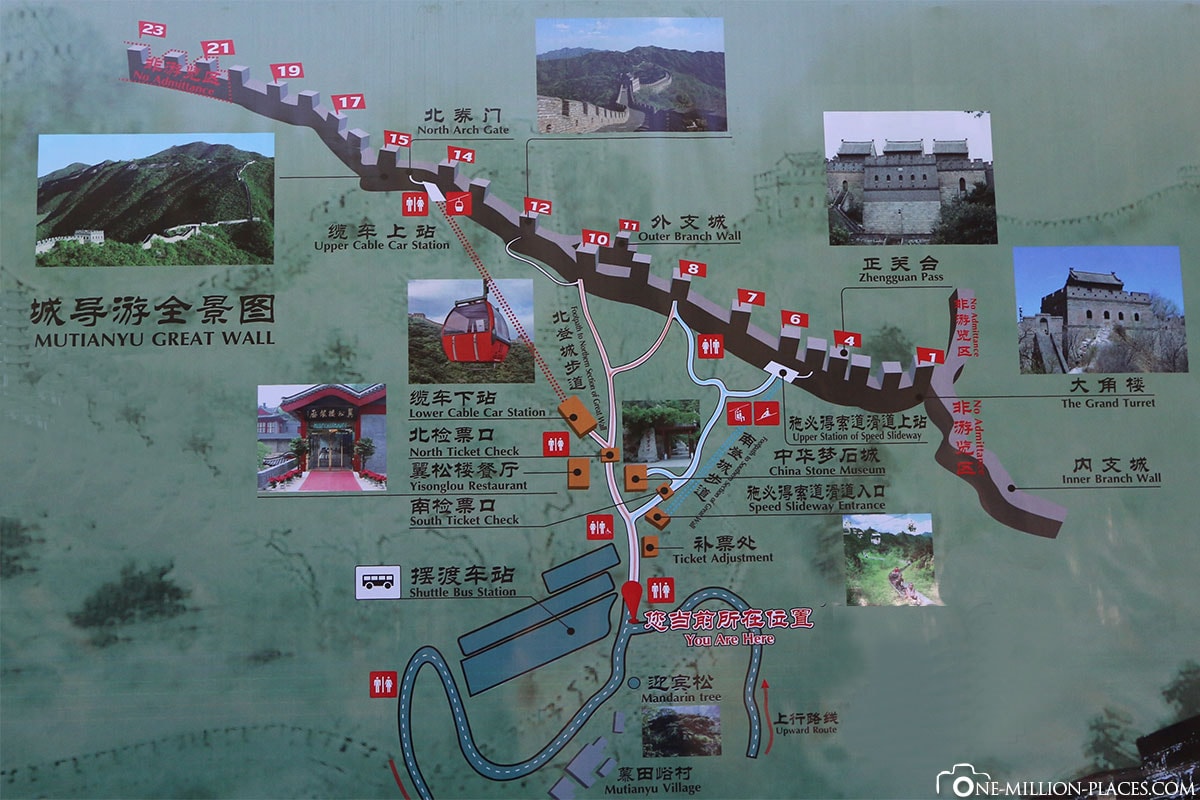 An overview map of the wall section at Mutianyu

Hiking on the Great Wall of China near Mutianyu

We had about two hours to take photos and walk along this restored part of the wall. Luckily, at 9.30 in the morning, there wasn’t much going on.

What should be avoided under all circumstances is to visit the wall (or other of the sights in China) during the Golden Weeks (non-working weeks). Because then it can look like this along the wall!! 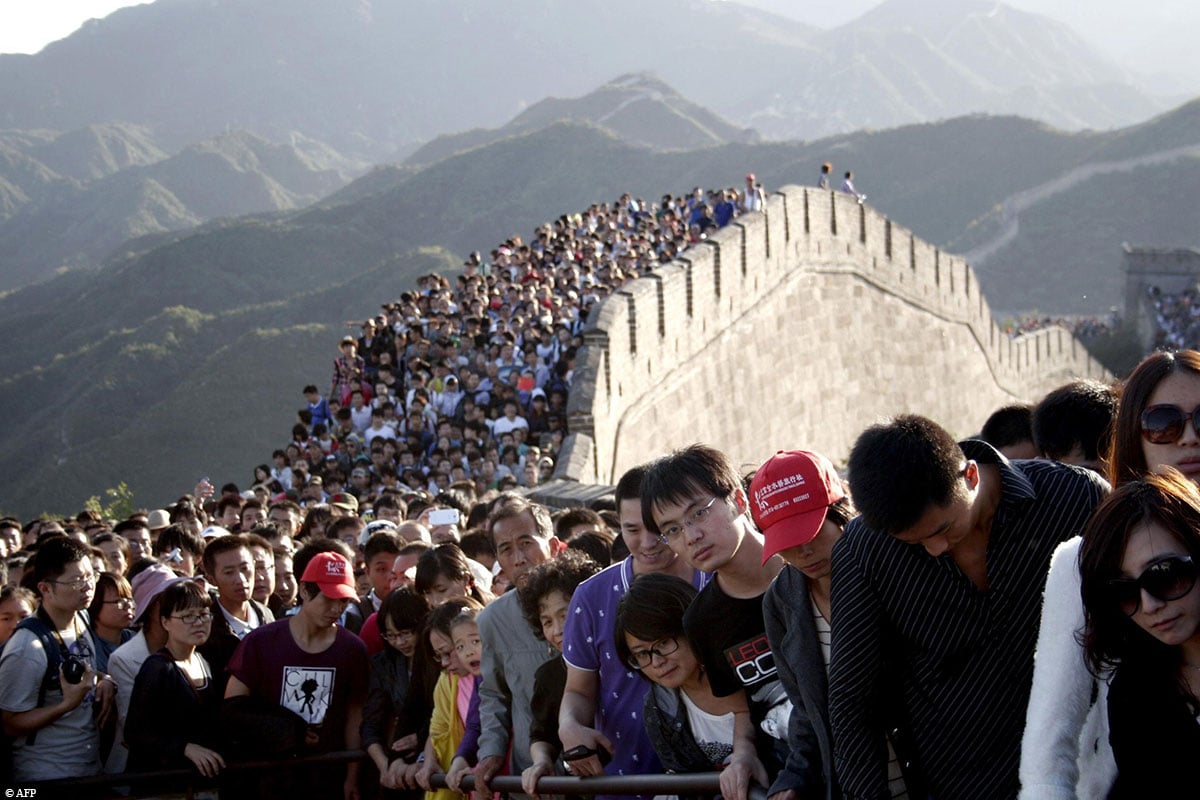 The Great Wall of China in Golden Week

The restored part of the wall can be southed to the Great Corner Tower. At this point, the wall was divided into two parts. Behind it you get a look at a non-resting part, which is however not open to the public.

From the end of the wall at the Great Corner Tower we walked back north. Here we also went to one of the watchtowers, from which one has a wonderful view of the landscape and the wall. We didn’t quite walk to the northern end of the wall, which was really warm today and the road was really exhausting.

With the toboggan run back into the valley

After a good 2 hours we took the summer toboggan run back to the valley, where our guide was already waiting for us.

From Mutianyu we continue to Huanghuacheng, where we could see and even walk a larger unrestored part of the wall. The report on this can be found here. 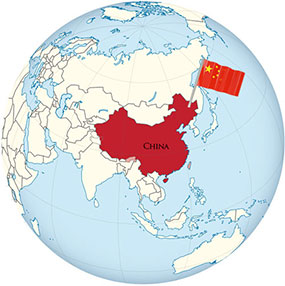