On this year’s Good Friday we were greeted in the morning with a blue sky and a lot of sun, so that the idea quickly became clear that we would drive to the nearby Opel Zoo in the Taunus. Even though we live nearby, we have never had a visit to the zoo on the screen or were there for the last time 20 years ago – so a lot of things have changed. And since we also had a visit over the Easter weekend, there was another reason to take a trip into the green in the beautiful weather 🙂

Things to know about the Opel Zoo

To some, the Opel Zoo may be known for the TV show “Giraffe, Erdmännchen & Co.”, which is broadcast on ARD. The Opel Zoo was founded in 1956 by Georg von Opel as the Georg-von-Opel open-air enclosure for animal research.

The zoo is located in the Taunus exactly between Kronberg and Königstein on the B455 on a slope and can be easily reached by car but also by public transport (S4 to Kronberg, then further by bus).

Parking at the zoo is free and there are plenty of parking. We were at the zoo about 11.30 am and were amazed at what was going on. The first two parking spaces were already full, there were parking signs, at the checkout a huge queue and there were an unbelievable number of families with children on the way. But well, we could have thought that … it is Easter, a holiday and also Hessian school holidays. In the park itself, however, this was distributed relatively well again.

The Opel Zoo is open every day of the year. Opening hours vary depending on the season and holidays. In principle, however, all visitors can stay in the zoo until nightfall.

Adults as well as children from 15 years pay the full entrance fee of currently 14 euros. Incidentally, the Opel Zoo is financed exclusively by these entrance fees and donations.

Own dogs in the zoo

What surprised us: Dogs are also allowed to go to the zoo if they are briefly led on a leash. You have to pay for this 2 Euro entrance fee and get hygiene bags at the entrance. We thought that dogs might not be allowed, as they could confuse the animals in the enclosures by the loud barking or when they walk around in front of the enclosures. But basically it is a nice thing if you can take your beloved four-legged friend on the excursion.

Food for the animals

At the entrance we saw a huge pile full of carrot bags. These can be purchased for 2 euros per bag and thus feed the animals in the zoo. Really great. Of course, we each bought a sack 🙂 Incidentally, it is not allowed to bring your own food from home and thus feed the door in the zoo, such as in the petting zoo, but also goats or elephants. At individual enclosures there are also donors with dry food, which can be purchased. You only have to be careful that only selected animals are allowed to be fed. Some animals could also cause damage to the food, so there are signs on these enclosures with the words ‘prohibition of feeding’, such as in the case of lynxes, monkeys or giraffes.

The different animals in the Opel Zoo

After the checkout we looked at the map and thought about how we want to walk through the zoo, i.e. where first, what if necessary at the end.

The Opel Zoo presents on an area of 27 hectares over 1,600 animals from 230 species. From elephants to giraffes and zebras to cheetahs and kangaroos, you will find a huge variety of animals that are admired by up to 750,000 visitors each year.

The zoo winds its way through circular paths and educational trails, from which one has unhindered insights into the enclosures of the animals. In the middle of the zoo runs the main path, which also acts as a public path (“Philosophenweg”) and leads from Kronberg to Königstein. If you want to leave this main path on the right or left, you will come across thick, red stripes on the floors or fences and signs that you are now entering a private area and you can only enter it with a valid ticket. This means that it is currently (as of March 2018) still possible to enter the main route without paying for admission. When we researched all this in the aftermath (because we couldn’t quite believe it), we came across the fact that there seemed to have been a decision in this discussion at the end of 2009 that provided that one could stay on this main route for 30 minutes without paying an entrance fee for the zoo. The checks were carried out on the basis of a passport. At the end of 2012, the whole thing looked different again: the said words of 2009 were no longer to be valid and the main route (aka Philosophenweg) was to be fully integrated into the zoo and thus become part of the area subject to entry. Well, now we have 2018 and the main path is still freely accessible.

We strolled through the zoo for about three hours and looked at the different enclosures in the most beautiful sunshine. Many animals could be seen in the outdoor enclosure; few were still in their winter quarters, such as the turtles.

Many enclosures are very generous and sometimes it seems that there are only a few barriers between visitors and animals. By the way, the goal of the zoo founder Georg von Opel was to show the animals in enclosures close to nature and, if possible, without visible boundaries between humans and animals.

There are many people who are very negative about zoos and zoos, because of too small cages or even the fact that animals live in captivity here. The Opel Zoo shows that zoos also have a teaching assignment and can even contribute to the conservation of species using the example of the Mesopotamian fallow deer. In the 1940s, the species was considered extinct. The last animals of this species were spotted in Persia, now Iran. A few years later, in 1956, there were indications that a small group (about 25) of the Mesopotamian deer were rediscovered in Iran. The founder of the Opel Zoo, Georg von Opel, then made several expeditions to Persia to catch deer and start a conservation breeding with them. Eventually he managed to bring a male and a female to Kronberg … and behold, the first offspring was born in 1960 – the foundation stone for the rescue of the species. In the meantime, more than 250 Mesopotamian deer have been born in the Opel Zoo, some of which have been poached in their original distribution areas or some have been handed over to other zoos. By the way, the fallow deer were very generous buyers of our carrots 🙂 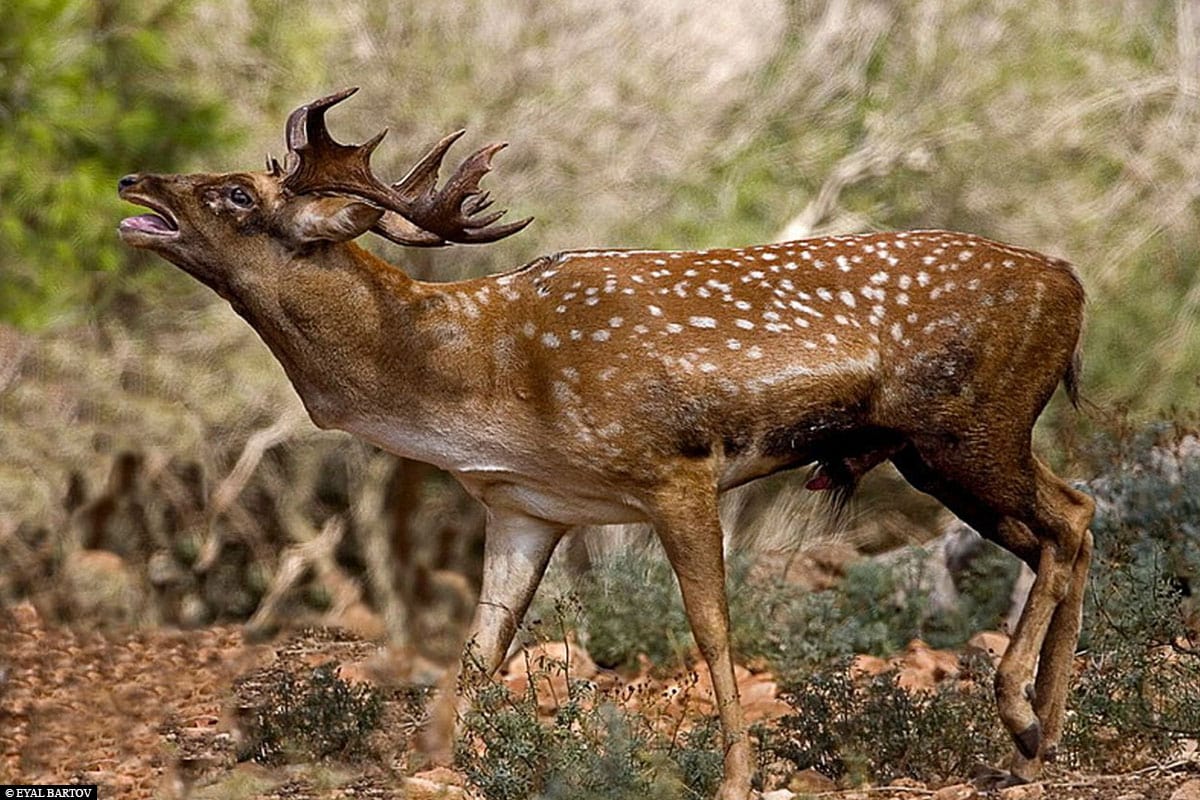