Today, the first on the agenda was a visit to Arusha National Park.

Founded in 1960, Arusha National Park is one of 11 national parks in Tanzania, located between Mount Meru and Kilimanjaro in the northeast on the border with Kenya.

The national park is 137 km2 in size and mainly includes the 4562 m high Mount Meru (an extinct volcano), the area of the Momella Lakes as well as the Ngurdoto crater and the small Serengeti (Google Maps). Entrance to Arusha National Park is subject to a fee. The fee in the Arusha, Tarangire and Lake Manyara National Park for 24 hours stay is 35 USD per person. The streets in the park are unpaved and can only be used by off-road vehicles. 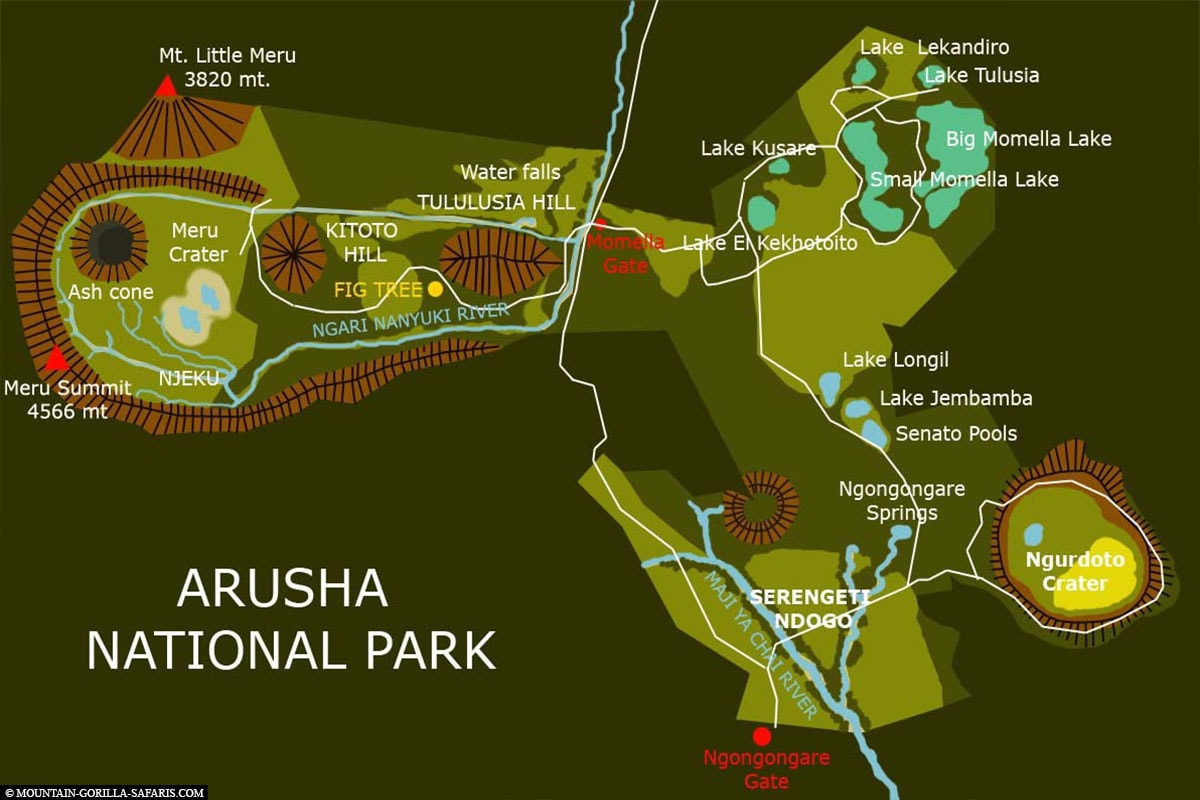 A map of Arusha National Park

Over the Ngongongare Gate in the south we drove into the park and passed a small green area (the “little Serengeti”) – on which like the first zebras, antelopes and buffaloes saw. The further path is mostly a shady and dense mountain forest, in which one can see above all many monkeys: from diadem-sea-cats to the black-and-white stub-monkeys to baboons.

But then we had a flat tire 🙂 For a good two hours we drove a part of the national park, saw giraffes, warthogs, eagles, dikdiks and ibex. And from the higher viewing point Mikindu Observation Point one had a great view into the Ngurdoto crater.

A Bushwalk through the Arusha National Park

After a small lunch at a picnic area at Momella Gate,we did a two-hour bushwalk with an armed ranger in the prayer room around Tululusia Hill and saw a giraffe very close. We walked up to a beautiful waterfall and watched buffaloes, warthogs and monkeys along the way.

After we arrived at the parking lot again, we drove with our guide another 1.5 hours through the park. At the Momella lakes you could see thousands of flamingos colouring the lake into a pink surface. In the background is the majestic Kilimanjaro, with 5,895 meters Africa’s highest mountain. On the further drive through the Arusha National Park we could see some giraffes, hyenas and monkeys at the side of the road.

Around 6 p.m. we arrived at our night quarters, Momella Wildlife Lodge, and surprisingly found that we are the only guests today 🙂

On our 7-day safari tour we also slept one night in the Momella Wildlife Lodge, as we had previously visited the Arusha National Park here. Our group was the only one who was in the lodge at the time. We were accommodated in a round hut, which was simple but clean. The bath was also ok, even if it changed again and again between hot and lukewarm water. But that is perfectly fine for seclusion. Our chef Dixon then conjured us a great dinner and around 10 p.m. – when the electricity was turned off anyway – we lay in bed.