Today, one of the most famous and largest national parks in the world was on our program: the Serengeti National Park.

The trip to the National Park

Today was the time to get up early. When we showered at 6 o’clock, it was still dark outside. We packed our car and drove over dusty slopes to Serengeti National Park, 85 km away. Along the way we have already seen some elephants, giraffes, zebras, wildebeest, jackals and gazelles. Around 10.30 a.m. we arrived at the main entrance of the Serengeti National Park and had a small picnic before the ride continued. From a higher hill you have a great view over the wide landscape.

The Serengeti is Tanzania’s oldest national park. With a size of about 15,000 km2, it is also one of the largest and most famous national parks in the world and has been a UNESCOWorld Heritage Site since 1981. The park borders Kenya to the north and Lake Victoria to the west. The word Serengeti is derived from the Masai language from the term “Siringitu” and means “the endless land”. The Serengeti National Park is, to our knowledge, the most expensive national park in Tanzania. Entrance to a 24-hour ticket costs USD 60 + car and overnight fees.

The park is home to more than 1.6 million herbivores and thousands of predators. The most common animals in this region are wildebeest, Thomson and Grant gazelles, antelopes, steppe zebras and African buffaloes. But you can also find many lions, cheetahs, leopards, elephants, hyenas, river horses, giraffes, imapllas, jackals and over 500 different bird species. Every year, more than 90,000 tourists visit the Serengeti.

Particularly interesting here is the annual repetitive natural spectacle, the animal migration. About 6 million wildebeest,more than 200,000 zebras and 300,000 gazelles are moving. All with the same goal: the fresh pastures in the north (to Kenya), where the animals regenerate in a short time and about 8,000 calves are born daily before the 1,000 km long hike begins again. We were very curious to see if we would see a part of it. 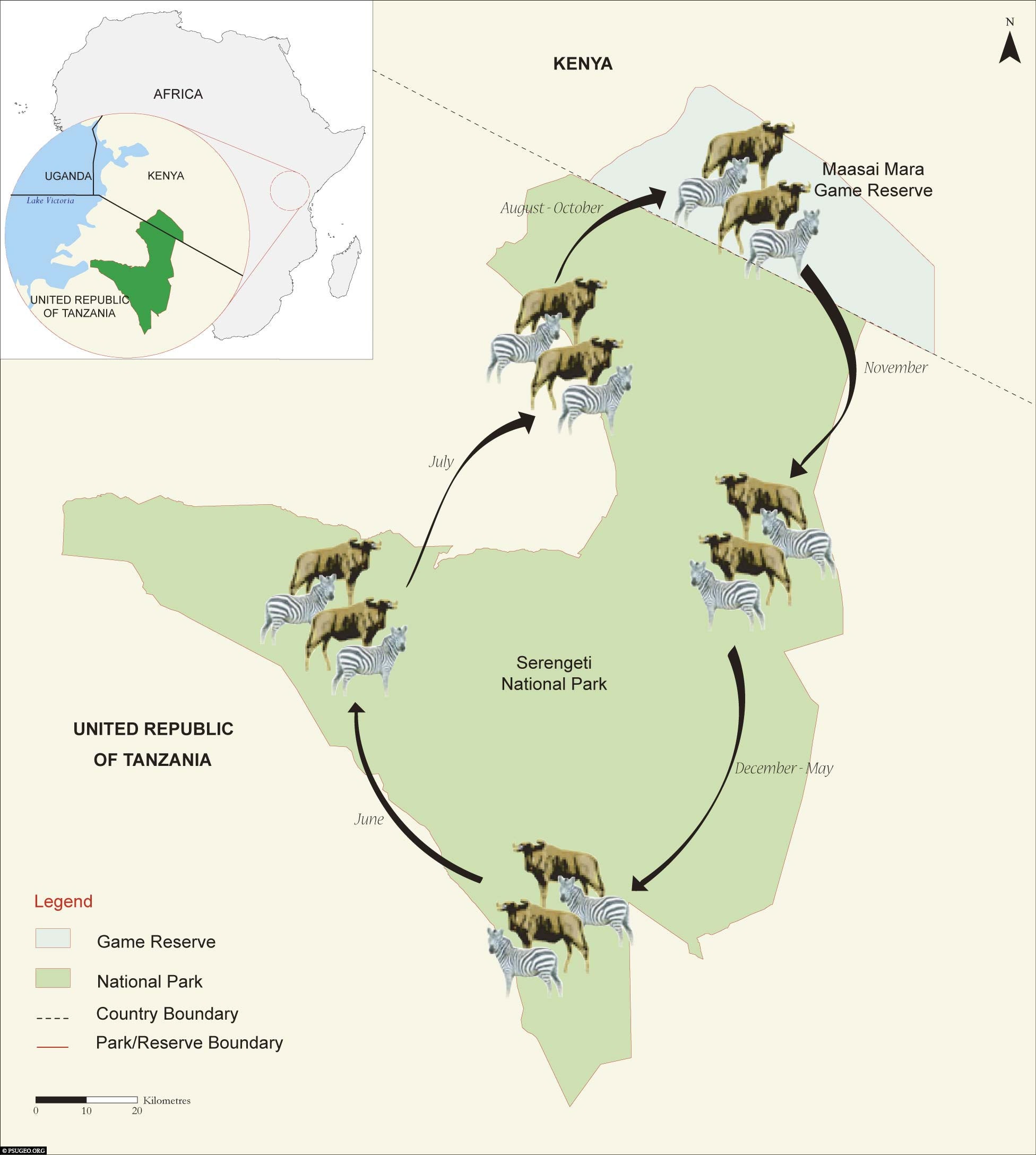 The annual cycle of large animal migration in the Serengeti

Our game drive through the Serengeti

On the way to our camp today we did a little game drive and saw elephants, ostriches, giraffes, wildebeest, gazelles and a secretary bird. Eventually the path became narrower and more muddy, so we almost wanted to turn around. In the distance, however, we saw that another safari car had got stuck in the deepest mud. Our guide and our cook then managed together with the guide of the other car to pull the car out of the mud and tow a piece. In the next 1.5 hours we didn’t see many animals, but there was still a highlight: a lioness lying relaxed on a branch. When we passed a hippo pool, unfortunately it started to rain more and more, so that we went to our Camp Seronera and unloaded all the things.

Our evening cruise through Seronera

When the rain stopped slowly, we sat down again in the safari car and used the time until sunset for a game drive through the Seronera. Seronera is located in the heart of the Serengeti and is one of the most interesting areas of the national park due to its animal diversity. And this proved true during our game drive: we saw thousands of wildebeest and zebras that had reached the Serengeti on the way of their migration. The soundscape is absolutely fascinating. Also we could finally see lions here, who rested on their rocks in the evening sun.

Very interesting was also a lion pairing, which took place directly in front of our jeep. At first, the lion couple lay quite relaxed on the side of the road. After the mating, you could see how both the lions absorb edits of each other in the air. The animals raise their heads slightly, open their mouths slightly and pull the upper lip far back, stretching out the tip of the tongue if necessary. The air inhaled in this way is routed along the palate with the odour substances and reaches the Jacobson organ on both sides of the nasal septum via the intermediate jaw passage (connection between the nasal and oral cavity). The olfactory perception with this organ is also called flehmen and usually takes place in response to certain odors (multiple urine), i.e. most often in the context of reproduction and for this reason can be observed more often in males. The facial expression created by the flaring disfigures even the most majestic cat animal, so that one often speaks of “grimassing” and “grimassen cutting” [Source: kidogos-bigcats.de].

Our night at Camp Seronera

As it got dark we went back to our camp, where we could watch a great sunset. After sunset there was dinner. Since our camp was located exactly between two lion rocks, we were curious who walked through and around our camp at night. And in fact, there were always violent lion roarsat night.

Our videos of the Serengeti

The highlight of the evening was a lioness who chased a Gnu and killed her successfully in the end. As cruel as it is to look at the whole thing, it is the course of nature and was already very fascinating to have seen this with one’s own eyes. We also recorded a short video of the Serengeti animal migration.