In the search for beautiful day trips in our immediate surroundings, we became aware of the Hessenpark which is located in the Hessian Neu-Anspach in the Hochtaunuskreis. The Hessenpark is an open-air museum and offers an insight into the history of Hessian village life in recent centuries.

The Hessenpark was opened in 1978 and houses more than a hundred historic half-timbered buildings from all over Hesse and a total of around 200,000 objects of everyday life on its 65-hectare site. Visitors are taken on a journey of discovery into the Hessian everyday culture of earlier times: for example, there is a church from the 15th century, an old school from the period around 1900 or an inn of the 1950s.

The Hessenpark is primarily used for the museum collection of buildings. In other areas of the park, there are demolished half-timbered houses and other buildings, which have been rebuilt here – mostly using the old building material – in order to preserve them as “witnesses of wood and stone” for posterity. Furthermore, visitors should get an impression of the former village life and information about traditional construction techniques, crafts and agricultural methods.

The park is located in Neu-Anspach in the Hochtaunuskreis in Hesse (location in Google Maps).

A map of the Hessenpark

On the overview map you can see quite nicely how the Hessenpark is structured. On well-developed paths you can discover five regional assemblies and two special assemblies, which bring you closer to the building and living culture from different areas of Hesse. 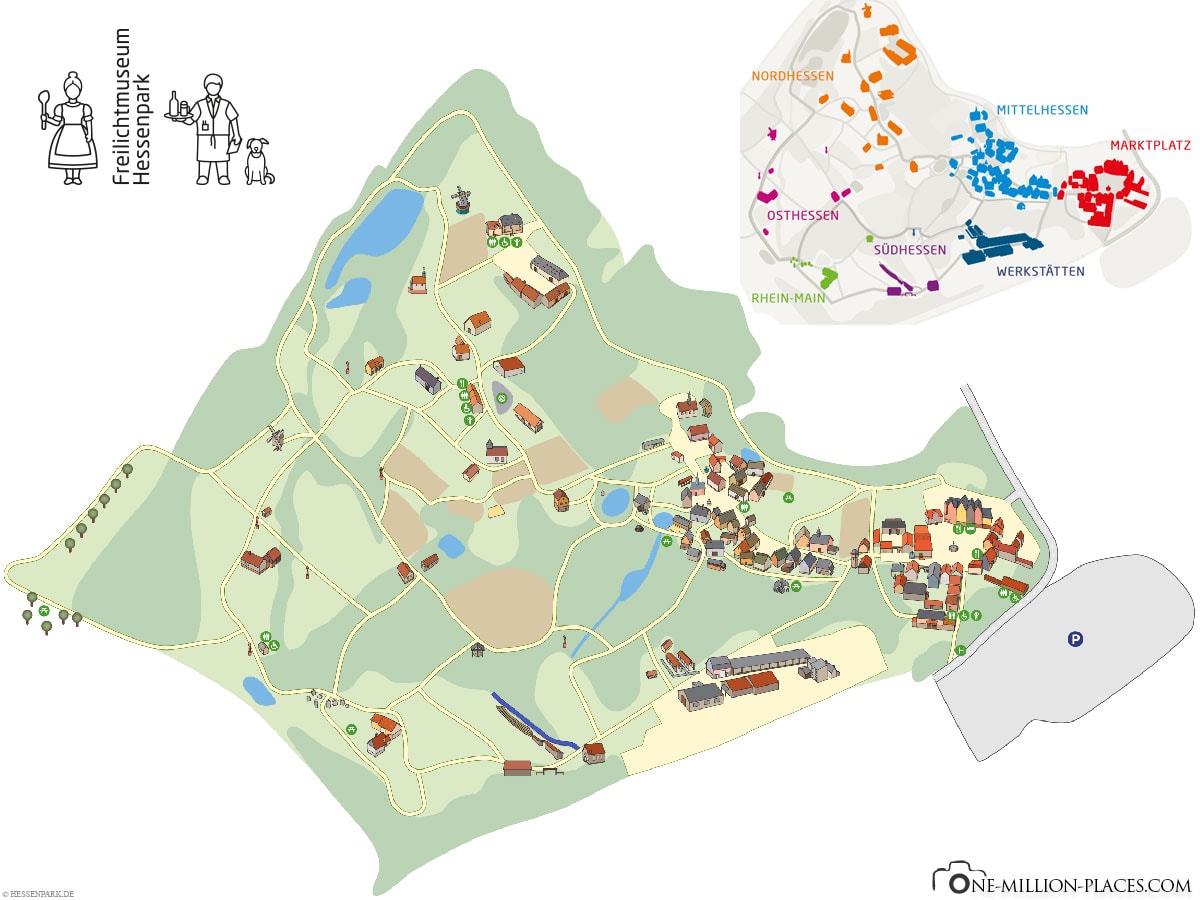 A map of the Hessenpark with the different areas

The market square with its 26 half-timbered houses and the four-tube fountain is the heart and historically oldest construction phase of the Hessenpark. Buildings from all over the state of Hesse are represented around the square, so it is not targeted at a specific region. In addition to a hotel, shops with locally produced products & souvenirs and gastronomic facilities (e.B. inn, bakery, delicatessen shop), there are several permanent exhibitions (e.B.g. Hessian photography, radio technology, cast iron exhibition, pharmacy).

A walk through the different regions

During our walk through the different regions of Rhine-Main, Middle Hesse, East Hesse, Southern Hesse and Northern Hesse we could see many more beautiful historic buildings and workshops. Directly adjacent to the market place is the middle-hesse region, which was one of the first to be completed in the 1970s and 1980s. The centre of the area is a small square with a half-timbered chapel and a school and town hall. There is also a chapel in the Middle Hesse region, which can be used for weddings.

In the regions of Northern Hesse, East Hesse, Southern Hesse and Rhine-Main there are comparatively fewer houses. In contrast, there is, for example, a buck windmill, a vineyard, stables, a large ten-barn and a trimming-dich path to admire.

Spread over the grounds of the Hessenpark, you will find various (permanent) exhibitions and showrooms in which you can get an insight into the life and everyday working life of earlier times. These include the radio technology museum, the pharmacy, a photo museum, the cast iron exhibition as well as the Hessian watchmaking school and the workshop of watchmakers.

The Hessenpark is a very nice excursion destination for young and old and you can spend a good whole day on the extensive grounds. By the way, there are also enough picnic areas.