We were particularly looking forward to a new building in Dubai: the Dubai Frame. The spectacular building in the form of a huge picture frame is now one of the city’s new landmarks and a popular excursion destination. In addition, a visit can be ideally combined with the small amusement park Dubai Garden Glow.

Things to know about the Dubai Frame

Since 2018, the Dubai Frame has been the new most spectacular building in the Dubai skyline. The architectural masterpiece consists of two 150-metre-high and gold-shining towers, which are connected below by a base building and above by a 93 metre long bridge. The shape is reminiscent of a gigantic picture frame and is called the “largest picture frame in the world”.

The 37 million euro building was used to install a total of 2,000 tons of steel, 15,000 square meters of gold cladding and 2,900 square meters of glass. At the lower part of the frame is a museum that shows the development of Dubai from a fishing village to one of the most famous luxury metropolises in the world. In the upper part there is a connecting bridge with a spectacular observation deck, which offers a unique 360-degree view of the entire city.

By the way, the location of the frame in Zabeel Park between the old city centre and the young districts is deliberately chosen. The Dubai building is not only intended to frame, but also to connect the new modern Dubai in the south with the old traditional Dubai in the north.

We actually thought that access to the frame in Zabeel Park was open to the public. But the area is largely cordoned off. So you can only get close to the oversized golden picture frame if you buy an entrance ticket. The Dubai Frame is open daily from 10 am to 7 pm all year round. Admission costs around 11 euros (50 dirhams) for adults and just under 5 euros (20 dirhams) for children over 3 years.

The observation deck in the Dubai Frame

The cash registers are located at Gate 4 at the eastern end of Zabeel Park. From here, a short walk leads past some food trucks to the main entrance. We were able to drop off our stroller free of charge at the entrance to the cash registers, as it must not be taken high on the viewing platform. After a short security check we passed a small museum and then with a panoramic elevator to the 48th floor. The glass elevators on the sides of the frame already offer a great view of the city.

The observation deck faces north to historic neighborhoods such as Dubai Creek, Al Fahidi, Deira and the surrounding souks. To the south stretches a sea of skyscrapers.

The highlight of the viewing platform, however, is a 93-metre-long and walk-in glass bridgethat connects the two vertical towers. This 25 square metre glass catwalk offers a special technical highlight: First, the glass floor is milky veiled and you can’t see through it. But as soon as you enter it, the veil disappears under your feet and lets you look 150 meters deep at the Zabeel park.

We spent about 20 minutes on the observation deck. But you are not bound here.

So is it worth visiting the Frame in Dubai? We think so! At first we only wanted to take a few pictures from the outside, but then we did not want to take a visit to the observation deck. Even if the visit seems relatively entertaining, the entrance is worth your money in any case and you have a great view of 2 different
Pages of Dubai. In addition, the glass catwalk is a special highlight.

The view of the picture frame of Zabeel Park

To take beautiful pictures of the Dubai Frame, you don’t necessarily have to buy a ticket for the viewing platform. Also from the adjacent Zabeel Park you have beautiful views on the huge picture frame. If you want to visit Zabeel Park, you only have to pay an entrance fee of 5 dirhams (approx. 1 euro). However, if you have bought ticks for the viewing platform, then the subsequent visit to Zabeel Park is free of charge.

Similar to the At the Top observation deck at Burj Khalifa, we found it ideal to visit the frame just before sunset. The setting sun dips the picture frame into a golden-shining light at this time. We took a taxi from our hotel in Downtown Dubai around 5 p.m. and paid 25 dirhams (6 euros) for the route.

Shortly after sunset, guests can also visit the adjacent small Dubai Garden Glow theme park. It is directly connected to Zabeel Park via a bridge.

Dubai Garden Glow is a single sea of lights: 10 million energy-saving lamps transform the park into a dazzling play of colours shortly after sunset. Since 2005, numerous works of art made of recyclable materials have been transformed into a colourful world of lights. However, the largest glow park in the world is only open during the winter months (1 November to 31 May) from Saturday to Thursday between 16:00 and 23:30. Admission costs 60 dirhams per person (approx. 13 euros). 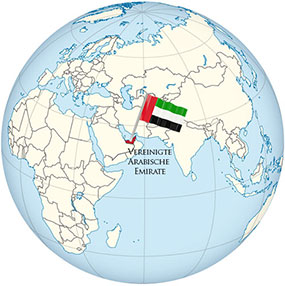