About fifty kilometers from the Saxon state capital Dresden, is the large district town of Bautzen. The “City of Towers” scores with a historic old town, medieval defensive towers and beautiful photo spots.

Things to know about Bautzen

The eastern Saxon district town of Bautzen has about 40,000 inhabitants and is located on the Spree. It is considered the historical capital of the Upper Lusatia region and is at the same time the political and cultural centre of the Sobs. The West Slavic people of the Sords live mainly in Lusatia in eastern Germany and have their own language, flag as well as customs and traditions. It is very interesting that in this area local and road signs are often bilingual (German/Sorbian).

Bautzen was first mentioned as “Civitas Budusin” in 1002 and thus looks back on more than 1000 years of history. In the city you will find many towers, gates and bastions as well as hundreds of cultural monuments from different centuries, so a tour of the city is a foray through its history. A culinary specialty is the Bautz’ner mustard, which is also known beyond the city limits.

The old town of Bautzen can be explored on foot and on your own, because the most important sights are compact in the city centre. We parked our car in the Kornmarkt-Center and started our tour of the city from here.

The most beautiful view of the old town

Our first port of call was the Friedensbrücke, a 181-metre-high stone arch bridge that spans the Spree Valley at an altitude of more than 20 metres. From the bridge you can enjoy a breathtaking view of the city’s most striking ensemble, consisting of old water art, St. Michael’s Church and water tower. For us the most beautiful photo motif in the city! 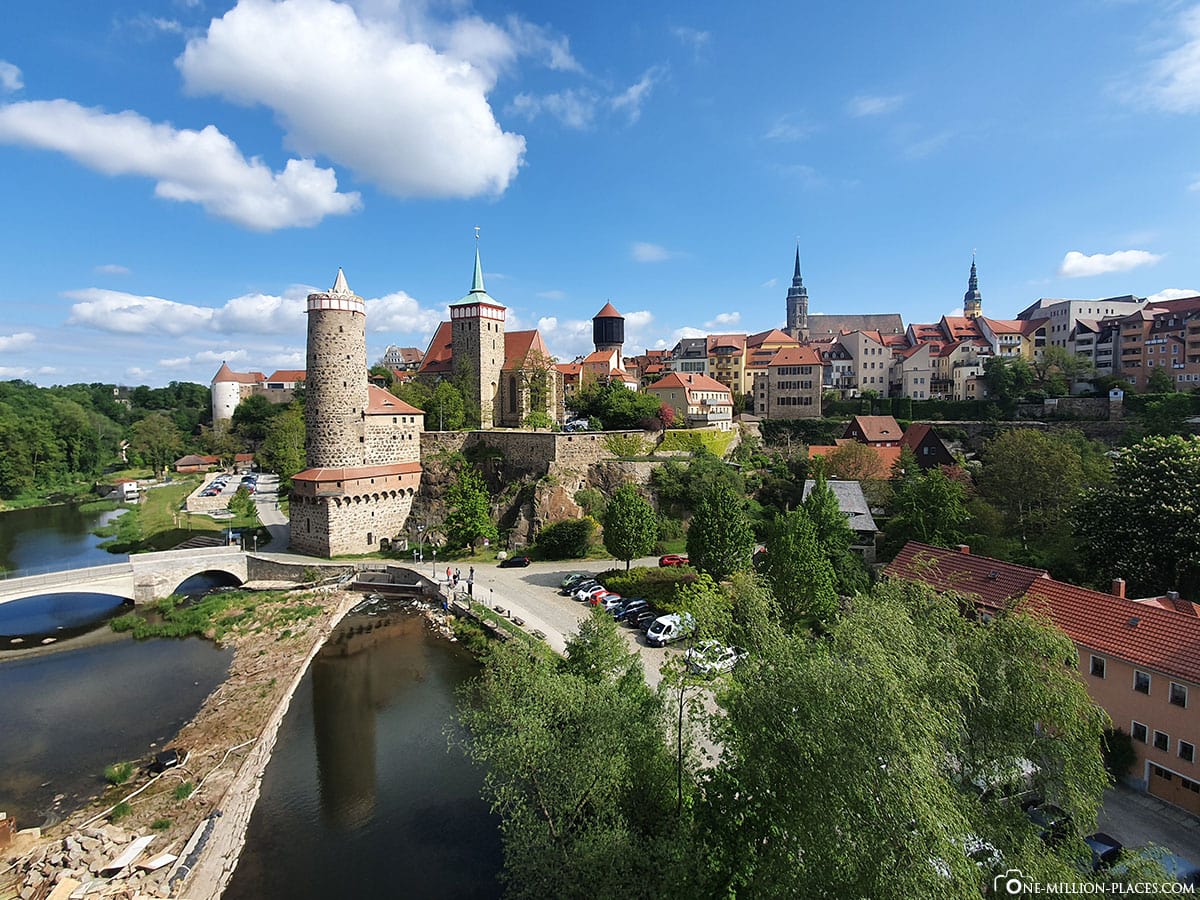 The Spree & the old town of Bautzen

Around the main market

The heart of the main market is the baroque town hall with town hall tower, on which various clocks are located. The first town hall existed here as early as 1213. Due to destruction, fires and various reconstructions, almost nothing has been preserved from the building of the former building. The town hall was given its present form after a reconstruction between 1729 and 1732.

North of the town hall is the Cathedral of St. Peter, which was inaugurated in 1221 and is considered to be the oldest and one of the largest simultaneous churches in Germany. After the Reformation, the cathedral functioned as a simultaneous church, i.e. believers of different Christian denominations use the church house equally: since 1524, the nave, the sacristy as well as the organ gallery are Protestant and the choir as well as the first gallery Roman Catholic.

The Ortenburg & the ruins of the Nikolaikirche

Above the Spree lies on a rocky plateau the mighty Ortenburg, which was built around 928. For several centuries it was the tribal castle of the Milzens, a West Slavic tribe and ancestor of today’s Sobs. Today, the Ortenburg is home to the Saxon Higher Administrative Court. On the grounds of the castle courtyard there is also the Sorbian Museum, a castle theatre and a restaurant.

A few minutes walk from the Ortenburg, lies the ruins of the Nikolaikirche with the Nikolaifriedhof. The church was built at the beginning of the 15th century and did not survive destruction, devastation and fires – to this day it is a ruin. Since 1745, the church ruins have also been used as a cemetery. From the church grounds you have a very nice view of the Spree and the Protschenberg.

From the Kornmarkt-Center, a walk down the Mühltorgasse down to the banks of the Spree is worthwhile. You also pass the listed witch’s house, one of the oldest residential buildings in Bautzen. It is an old fisherman’s house, built before 1604 and survived the great fire in 1634. After the last tenant moved out in March 2020, the house is now being transformed into a museum.

Towers and gates in the Old Town

Bautzen is considered to be the city of towers,which are already visible from afar and shape the silhouette of the city. We discovered some beautiful towers during our tour of the city centre.

The most striking ensemble of the city consists of the Old Water Art,the St. Michael’s Church and the Water Tower. All three buildings are best seen from the Peace Bridge. The Gerberbastei is a five-storey circular building with 3.50 m thick walls, built in 1503, which was built as a fortification. The Reichenturm is nicknamed “The Leaning Tower of Bautzen”, because it has a slope to the northwest of 1.41 m at a height of 56 m. From the observation deck you can enjoy a great view of the old town.

We enjoyed our two-hour tour through Bautzen and we were able to explore all sorts of sights in fine weather.