On the way from San Francisco to Lake Tahoe, halfway through the capital of California is the cityof Sacramento . It takes only 1.5 hours from San Francisco for the approximately 150-kilometer stretch of Interstate 80. Due to the evening traffic and longer traffic jams, it took us about 3 hours the night before. This morning we wanted to use to explore downtown Sacramento.

Our car rental for California

In the first 3 days in San Francisco we didn’t have a rental car, just for the reason to save the horrendous parking costs in San Francisco. Prices of .40-$50 for parking per day are not uncommon here! We actually got to all sights in San Francisco easily by Hop on Hop Off Bus, Cable Car or on foot. For some sights, such as the Twin Peaks or the viewpoints of the Golden Gate Bridge on Conzelman Road, a car is still very beneficial.

So we only got a rental car at Alamo at Fisherman’s Wharf on the last day in San Francisco. Until the early afternoon we explored a little San Francisco and then made our way to Sacramento as written above. We paid a total of €310 for 10 days for our rental car for a Jeep midsize SUV (over billiger-mietwagen.de), incl. the all-round carefree insurance package. With this car we drove more than 2,100 kilometers across California 🙂

Things to know about Sacramento

Sacramento has been the capital of California since 1854 and is home to about 500,000 people.

From 1839, the area belonged to the private colony of New Helvetia, founded by the Swiss immigrant Johann August Sutter. With the permission of the Mexican administration, he expelled the local Indians and founded Fort Sutter in 1841, which later became the city of Sacramento. In 1848, the territory of what is now the state of California and thus Also New Helvetia passed to the United States. In the same year, gold was discovered at a sawmill (Sutter’s Mill). The find triggered the California gold rush and the onslaught of gold diggers ruined Sutter’s empire. He lost everything and was completely impoverished. When the first railroad opened in 1856, Sacramento grew into a commercial center and attracted more and more people. The construction of a canal in 1863 facilitated shipping and thus trade in goods.

A map of what to see in Sacramento

Sacramento doesn’t really have much to offer in sights. Most of it is very centrally located in the city centre and is therefore also within easy walking distance. We parked our car in a parking garage in Old Sacramento and took a total of 4 hours for our tour. On the following map you will find an overview of the sights, which we have also stored here in Google MyMaps. 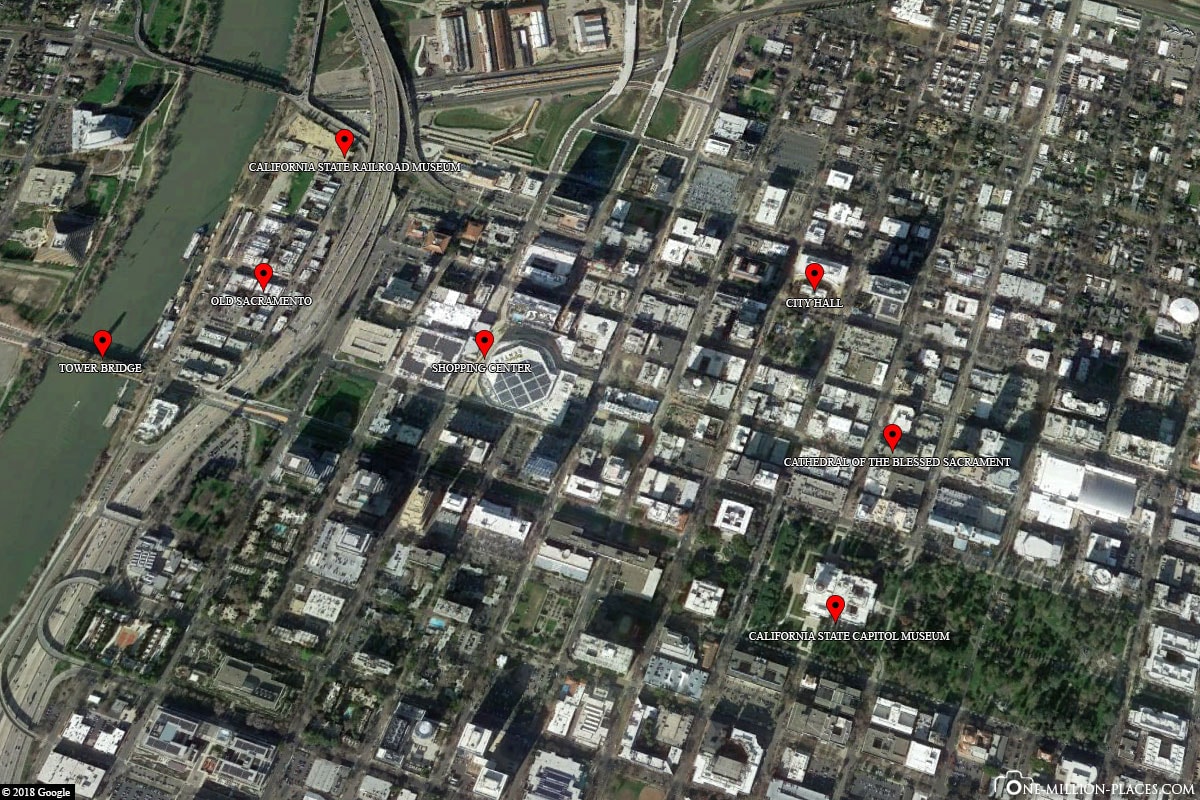 Map of what to see in Sacramento

The historic old town of Sacramento

As this area of the city had fallen into disrepair in the 1960s, a plan was devised in the mid-1960s to redesign the area. This laid the foundation stone for the first old town in the west. Gradually, this part of the city and its historic buildings have been restored and developed into a major tourist attraction that attracts more than 5 million visitors each year. Old Sacramento now covers the area between the waterfront, Interstate 5, between I Street and Capitol Mall. The 28-acre site is home to 53 buildings of historic value,registered as a National and California Historic Landmark. Almost all the buildings in this area date back to the 19th century, the most notable being from the time immediately after the devastating fire of 1852. Most of the buildings are designed for tourism and now house restaurants, souvenir shops or other shops.

As we strolled through Old Sacramento, there was early morning and really little going on. So we had enough time to take beautiful photos of the restored houses without other tourists. Perfectly 🙂 The weather was also great: it was sunny and warm, i.e. real T-shirt weather. The architecture of the houses dates back to the Spanish and Mexican rule of California. As a rule, the houses here are multi-storey, have large arched doors, raised balcony windows and wrought-iron balconies.

Notable buildings in the neighborhood include:

• B. F. Hastings Building: This building, which houses the Wells Fargo History Museum and the Old Sacramento Visitor Center, was once home to the Pony Express and the California State Supreme Court (1855-1869).
• Big Four House: The original three separate buildings were built between 1851 and 1852. The name of the house honors the four California nanes Collis Huntington, Mark Hopkins, Leland Stanford and Charles Crocker – better known as “The Big Four”.
• Lady Adams Building: The oldest commercial building in Old Sacramento.
• Sacramento Engine Company No. 3: The oldest surviving fire station in Sacramento.
• Old Sacramento Schoolhouse Museum: In the small building you can experience a vivid replica of a 19th-century one-room schoolhouse. The museum is free of charge and is open from 10 a.m. to 4 p.m. on weekdays and from 1 p.m. to 4 p.m. on Sundays.
• Eagle Theatre: Founded in 1849, the theater was the first permanent theater in California. Due to a flood in January 1850, the building lasted only one year, but was reconstructed.
• Booth’s Residence: Front Street is the first home of a U.S. governor in California.

Another highlight in Old Sacramento is certainly the California State Railroad Museum, one of the best railway museums in the USA. Due to lack of time we were unable to visit the museum. But on the outside you could see a few historic trains from the former Central Pacific Railroad passenger station.

The gold-yellow Tower Bridge is a vertical lifting bridge over the Sacramento River that connects West Sacramento in Yolo County with Sacramento to the east.

Construction of the bridge began on 20 July 1934. The Tower Bridge was originally designed with a 16-metre wide pavement with pavements that is single-lane for cars and offers a 4 metre long middle carriageway for trains. The towers are 49 metres in size. After 1.5 years of construction, the then governor inaugurated the bridge in December 1935 and led the opening parade over it. 1,000 pigeons were released to spread the news across California. The first train had already crossed the bridge a month earlier. In 1963, however, the railway tracks were dismantled again and since then the bridge has only been permitted for vehicles and pedestrians/cyclists. As we looked at the bridge from the riverbank, suddenly shrill warning signs sounded and traffic stopped in front of the bridge. Step by step, the bridge then lifted upwards, creating a vertical passage height of 30 metres for the passing shipping traffic with a 52-metre-wide channel between the wooden pillars. What a spectacle 🙂

The California State Capitol houses the government of the State of California and the governor’s office. The neoclassical building was completed between 1861 and 1874 at the western end of Capitol Park, was added to the National Register of Historic Places and has been listed as a California Historical Landmark since 1974. The building is very reminiscent of the U.S. Capitol in Washington, D.C. Eye-catcher is definitely the two-story rotunda with its 6.7-meter-high dome.

After looking at the building from the outside and taking a short tour of the adjacent park, we entered the building. Everyone who enters the building must first undergo a small security scan, as at the airport. Access is free of charge. In the middle of the rotunda on the ground floor is the marble statue of Columbus’ Last Appeal to Queen Isabella, from which you have a beautiful view to the top of the dome. The heart of the Capitol Museum is located in the basement and on the ground floor. Free tours of the Capitol are offered daily, but we wanted to walk alone through the rooms and take a look at everything in peace. On the ground floor, we first looked at the restored historic offices of the Secretary of State, Treasurer and Governor of California, as well as two other exhibition rooms. After that we went to two different meeting rooms of the “Senate” and “Assembly” and walked through the corridors of the Capitol. It’s all quite open, but of course there are also many cordoned-off areas.

On the way back to our car, we walked from the Capitol a little bit through the city center. The first port of call was the Cathedral of the Blessed Sacrament, a cathedral of the Roman Catholic Church. The parish church of La Trinité in Paris served as a model for this church. The completed cathedral can accommodate 1,400 people, has a length of 61 meters, a width of 30 meters and a 66 meter high central bell tower.

Basically, there is not much to see in the city centre. We made a short detour to City Hall and the shopping centre ‘Downtown Commons’ and then walked back to the car.

Hanoi has several Starbucks stores and also its own cup 🙂

The Starbucks City Cup of Sacramento