Also for this year we had planned to fly on holiday over our two birthdays at the end of April. But this time we had taken a little time with our travel planning because of the ITB in Berlin in March, because we wanted to be inspired by the travel fair and also had some interesting cooperation talks.

The Maldives as a destination

So where should we go this year? As possible destinations we had chosen the following destinations:

– The Bahamas, because we always wanted to swim with the piggy and nurse sharks 🙂
– Iceland, because we liked the island very much and here we were only in winter
– A round trip in Canada
– Raja Ampat, as this is one of the best diving areas in the world at the top of our bucket list
– An island trip in the Seychelles

But we had nabed the right offer for our desired date and at the ITB in Berlin we had a really great conversation with the Robinson Club . And so it came to pass that we agreed on a great cooperation, which should lead us to the Maldives for the second time. We had visited the Maldives six years ago and we really enjoyed it there. The island worlds are simply fantastically beautiful! At that time, however, we were not yet certified divers, so we had planned to fly to the Maldives again for some time to go diving. The cooperation had a further focus, but then more in one of the next contributions 😉 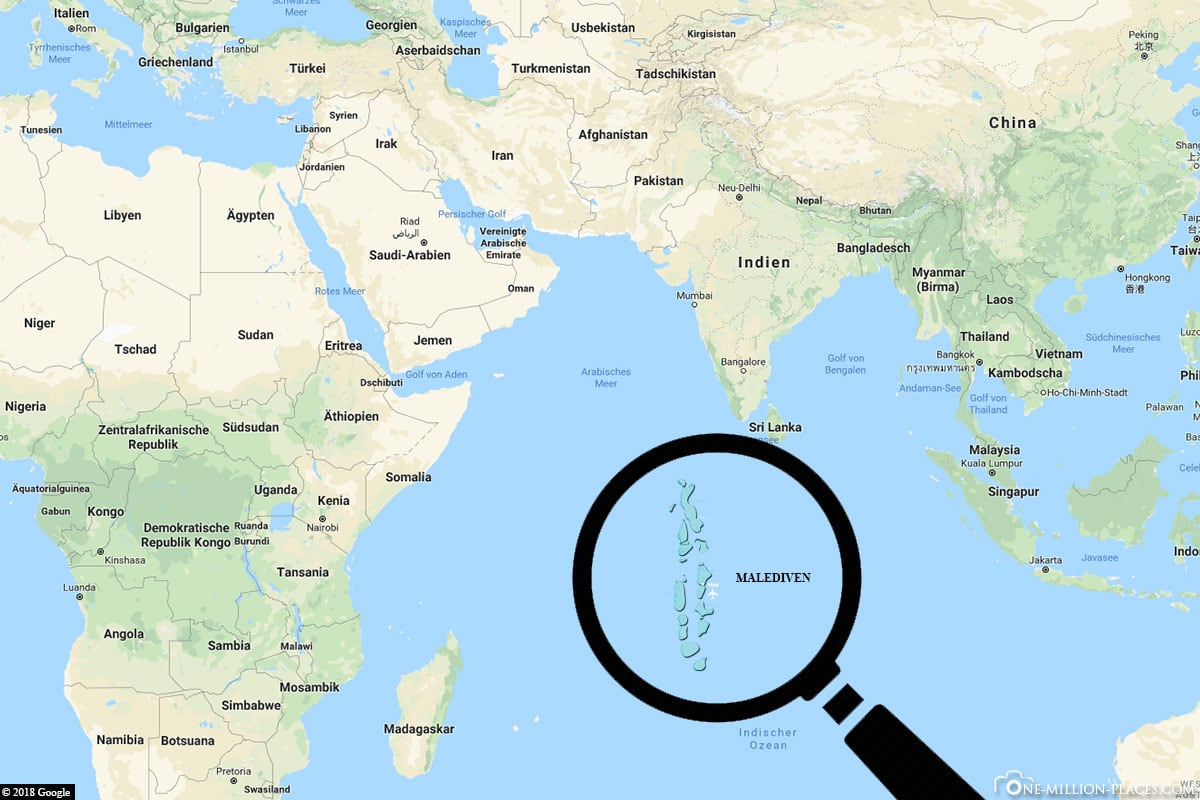 The location of the Maldives

Flights from Germany to the Maldives

What is the best way to get from Germany to the Maldives? A non-stop flight from Germany takes about 9-10 hours. In our flight search we could only find non-stop flights with Condor or Lufthansa, but only in the period from September to mid-April. Since these non-stop flights were unfortunately no longer offered during our travel time, we only had the option of a stopover or direct flight (despite their name, direct flights may also include a stop). For this purpose, the following connections are available, among others:

After comparing all prices, we decided to connect via Zurich. The price was similar to dubai, for example, but from our point of view the times were much better. In Dubai we would have had to spend 5 hours in the middle of the night at the airport before we would have gone on to Malé. We only had a 2-hour stay via Zurich and the onward flight starts in the early evening, so that you fly over the whole night and arrive in the Maldives at around 9 o’clock in the morning. That’s actually perfect. In addition, we planned our trip in such a way that we could stay in Zurich for a day longer on the return flight in order to explore the city on Lake Zurich a little.

So our flight plan was as follows:

Our flight via Zurich to Male

For us we started on a Sunday afternoon at Frankfurt Airport. The Swiss aircraft was fully booked, although every hour there are flights from Frankfurt to Zurich every day. At Zurich airport we had about 2 hours to change. In any case, this is enough to get from Terminal A to Terminal E in peace. For this purpose, there is the fully automated Skymetro, which connects the terminals with the satellite terminal E at regular intervals. The trip itself is already a highlight, because there are alpine pictures on the wall in the tunnel tube, which represent a thumb cinema-like animation when passing through. In addition, there are yodelling sounds, cow sounds and the beginning of the Heidi melody. Really a funny idea 🙂

Otherwise, we liked Zurich Airport very much. Insanely clean, neat and nicely decorated. When we were there in the evening, however, it was very quiet. Our flight was the only one in the vicinity of our gate that still flew off. What we found a bit strange, by the way, was the choice of seat at Edelweiss Air in advance. When booking the tickets, you would have had to pay 25 euros per person per way for a seat reservation. During the online check-in 24 hours before departure, however, we were able to select our seats at will and free of charge.

Just in time at 8.25 p.m. we started. In front of us were 9 hours and 10 minutes flight time. If you imagine that this is kind of a whole working day and you don’t do anything else except eat, sleep and watch movies, that’s kind of crass. But time really passed as if in flight. We found that the dinner came a little late – only after two hours of flight around 10.30 pm. Nevertheless: The food was quite tasty and the film selection was also great. Some sleep was even in there. In between, there was turbulence for about 40 minutes, which caused a female passenger to scream through the whole plane in fear. When you hear something like this, you almost panic yourself.

Shortly before landing, there was a breakfast and the flight attendants handed out immigration cards for the Maldives. These are small pieces of paper that you have to fill in with the individual information. The question of the date of the yellow fever vaccination shocked us slightly at first, because we did not know this by heart and had not even thought of taking our vaccination certificates with us beforehand. But the fine print on the back had put the whole thing into perspective again, because you only have to fill this point if you have been to South America or Africa in the last 14 days.

After a little over 9 hours of flight it was called “Hello Maldives”for us. Our plane landed on time at Velana International Airport (formerly known as Ibrahim Nasir International Airport) in Malé, the capital of the Maldives. Malé is the only real city in the Maldives and at the same time one of the most densely populated cities in the world. After we had received our luggage, a member of staff from the ROBINSON Club was already waiting for us. Together with him we walked to the national terminal, which is located right next to the international terminal. Here we checked in for our local onward flight and were able to spend the time until departure in the Moonimaa Lounge, where there was free food, drinks and – most importantly – air conditioning. So the wait was really pleasant 🙂

The Maldives is a chain (the name Maldives means “island chain”) of 19 archipelagos in the Indian Ocean, which extend over 870 kilometers in the north-south extent. So a really long stretch! Of the 2,000 coral islands, 220 islands are inhabited by locals and 87 islands are used for tourist purposes (resorts and hotels), such as Kuramathi, Bandos, Vabbinfaru or Meerufenfushi. Apart from the capital Malé, there are only a few cities in which the island nation’s 350,000 inhabitants live, such as Hithadhoo, Fuvammulah, Kulhudhuffushi or Thinadhoo. The Maldives is grouped into 26 atolls, both north and south of the equator. The islands are all only about 1 meter above sea level and the highest elevation is on the island of Villingili in Addu Atoll with an unbelievably high 2.40 meters 🙂

In general, the height of the buildings on the islands must not exceed the highest palm tree. In addition, many native species, including turtles and sharks, as well as 25 coral reefs, have been protected.

A map of the Maldives with the different atolls

Our domestic flight from Male to Kaadedhdhoo

To get to the ROBINSON Club Maldives, we had to make another short domestic flight from Male. Around 11 o’clock we went to the gate and with a few minutes delay our propeller plane departed from Maldivian.

In the next 50 minutes, the entire island world of the Maldives has revealed itself to us from above. The sight of the water in all sorts of shades of blue was breathtaking – in between always the atolls and small islets with their coral reefs and white sandy beaches. Simply fascinating. So you should always have your camera at hand in your hand luggage in order to be able to photograph the different atolls.

After landing at Kaadedhdhoo Airport, a ROBINSON employee picked us up again and took us to the speedboat, which took us to the resort in just over 30 minutes. Once there was a Welcome Drink & Snack and a very nice, warm welcome from a part of the staff. Our almost 18-hour journey was done 🙂 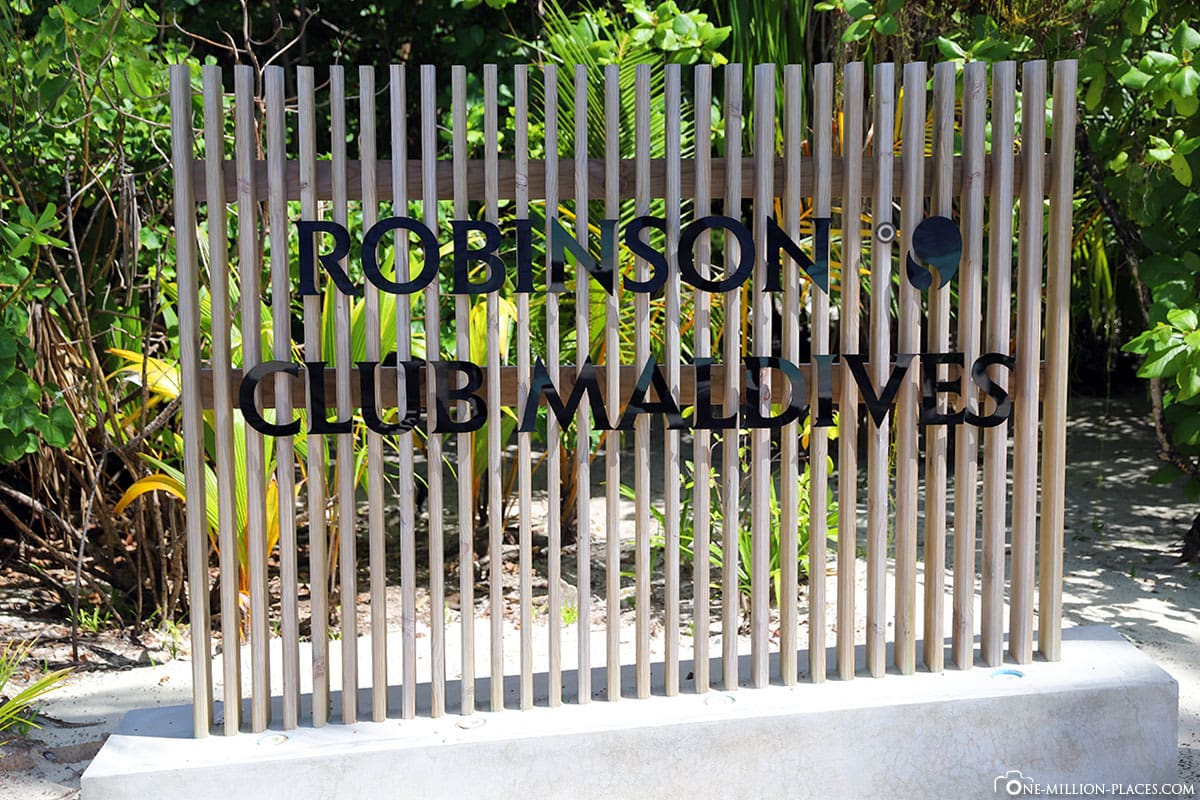 Now first shoes off and total relaxation for the next seven days! 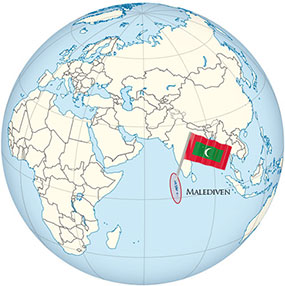