Today a short stopover in Qatar, the penultimate country of our world tour,was on the agenda. From our hotel in Mumbai, a shuttle took us to Mumbai International Airport around 2 a.m. Just after 4 a.m., our three-hour Qatar Airways flight departed for Doha.

At the check-in there was the first surprise when we were told that our luggage will be checked through from Mumbai to Kilimanjaro (Tanzania) and we will not get it in Doha. Even though we had only planned a short stopover of 20 hours in Doha, we needed our luggage, because after all we had booked a hotel room with washing machine and wanted to wash our things again for the last two weeks.

The problem was that our booked Qatar Airways flight from Mumbai via Doha to Kilimanjaro is probably a transit flight and not a stopover flight. Since we had booked the flights as a ticket, the luggage will also be checked through to the final destination. Of course, there was no information about it at the time of booking or on our e-ticket, so we didn’t know at all. But that didn’t interest the staff at the counter either. You simply referred us to their colleagues in Doha. There we could try to get our luggage for a penalty.

All right. Arriving in Doha, we walked straight to the Qatar Airways service desk. There, a member of staff told us that it would not be a problem at all. We would just have to arrive as normal and then ask the baggage service for our luggage, and our colleagues would then pick it up. That sounded promising.

The entry went relatively quickly. As a German, you can apply for a Visa-on-Arrival, which costs 100 Riyal (approx. 25 Euro) and is only affordable by credit card. Then there is a stamp in the passport and you are in the country. At the baggage service we were then told that we have a transit ticket and that we only receive our luggage for a fee. We would have to ask for this fee at the ticket office in the departure hall and then it will take at least 1 hour to get our suitcases. The employee at the ticket office quickly calculated that we would have to pay an incredible 110 euros for a suitcase, so together 220 euros!! Unfortunately, it could not explain to us why, as a customer, you are not informed at the time of booking that the luggage is checked through and that you do not get it at your transit point. Since 220 Euros were too much for us and we could have completely redressed from it, we decided to spend the 20 hours in Doha without a suitcase.

Our hotel in Doha

At the airport exit, an employee of our Hotel La Villa Inn Apartmentswas waiting for us to our accommodation. Since it was only seven o’clock in the morning, we had breakfast in the hotel and were able to move into our room at around nine o’clock.

We only had a short stopover in Doha for 20 hours and took a room at La Villa Inn for the time being. The staff at the reception were very nice. The apartment itself is generously furnished with an extra bedroom, a kitchen, a living room and a bathroom. However, there were a few flaws: the bathroom was completely submerged when showering, the room looked outdated and worn out etc. A supermarket is within walking distance. For a stopover certainly ok, for a longer stay we would take another hotel next time.

Around noon we took a taxi to the center in a hot 42 degrees and dropped off at the City Center Mall to buy some new clothes. After that we walked a bit through the center, which (as in many other Arab cities) is now increasingly dominated by high-rise buildings. The Corniche, which begins at the centre, stretches for about six kilometres along the semicircular bay and forms a stretch of the beach. From here you have a very nice view of the Doha skyline. Since the temperatures were unbearable, we went back to the hotel in the afternoon by taxi and lay already at 6 pm in bed.

Our flight from Doha to Kilimanjaro

For 24 o’clock we had organized a shuttle to the airport, which made a short stop at the Corniche, so that we could see the skyline once at night. Just in time at 2 o’clock our flight with Qatar Airways departed with Doha to Kilimanjaro (Tanzania) with a short stopover in Dar Es Salaam. 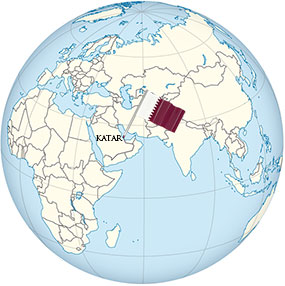